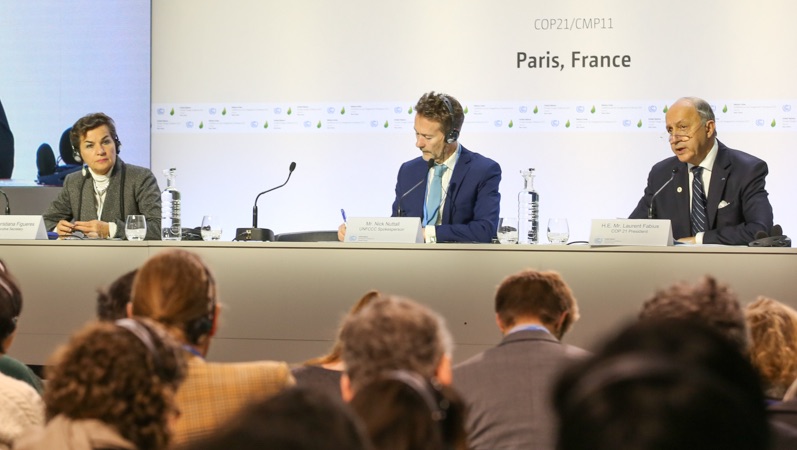 Negotiators at UN talks in Paris have decided to move discussions to a new level, agreeing on a set of draft proposals for a global climate pact that will be considered by ministers when they arrive in the French capital on Sunday.

The 48-page document is larger than one considered for approval on Friday night, but still a quarter of the size of a similar text presented to leaders at the ill-fated 2009 Copenhagen climate summit.

China’s lead negotiator Su Wei said it was “good news” and an “important consensus”, but stressed there were still “several disagreements” between leading nations after an all-night session of discussions into the early hours of Saturday.

European climate commissioner Miguel Arias Canete struck a note of caution in his press conference on Saturday. “During the last year we did not make any progress at all. Next week is the week of landing zones,” he said.

Once ministers arrive at the Le Bourget airfield in the northern suburbs of Paris on Sunday, talks are expected to notch up a gear.

EU sources say the French hosts will propose running a rolling meeting known in UN circles as an Indaba from Monday until the conference closes, with smaller sub groups of ministers feeding in ideas or possible compromises.

“No one will be left behind… there is no plan B and we do not need a plan B,” she said. The one in circulation will likely be the last printed copy until a new agreement emerges next week, said another source.

All difficult issues are as yet unresolved, said Canete. The EU is insisting that any scaling up of funding after 2020 is linked to developing countries making tougher carbon cuts and agreeing to take part in a five-yearly review process.

China and India are understood to be lukewarm on the idea of having to work out new climate plans in the coming years. Both submitted climate plans up to 2030 and have expressed reluctance at having to develop a 2025 target.

Chinks of light are emerging. Top US climate envoy Todd Stern said his team were working on plans to recognise the impacts faced by climate vulnerable countries.

Known as loss and damage, the US has previously steered clear due to perceptions it and other developed countries could face unlimited claims for liability.

Still, smaller countries remain concerned that they may not receive enough support to cope with future impacts.

“The issues dear to the Least Developed Countries (LDCs) are still not adequately represented within the text,” said Angola diplomat Giza Gaspar Martins.

“If the climate agreement does not work for the most vulnerable among us, how can we say it has been a success? We cannot.”

A plea to the mayors at #COP21: Commit to moving to #go100percent renewable energy. Do not wait another day. https://t.co/2O4hrzHkv2

As intense discussions continued film stars Leonardo di Caprio and Sean Penn cruised into the venue on a day the UN has set aside to highlight green initiatives from business, cities and regions.

Di Caprio urged the world’s mayors to “go 100% renewable energy – do not delay”. Penn asked delegates to “make a commitment to our children”.

The pair said they would analyse the “greatest climate crime of the century”: allegations Exxon scientists knew about the potential consequences of man made global warming but distorted the evidence.

“I think that Exxon Mobil stands potentially to lose billions of dollars in what I would imagine would be one of the largest class-action lawsuits in history,” said US secretary of state earlier this week, in quotes reported in The Hill.