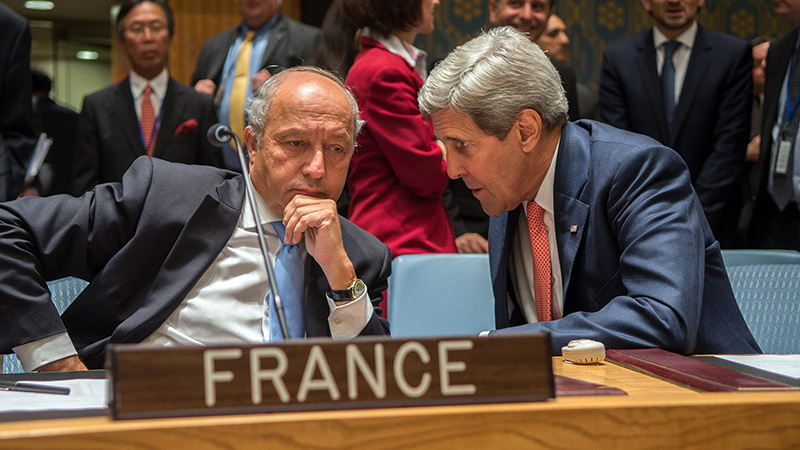 Climate hawks: France’s Laurent Fabius and US secretary of state John Kerry will be central to the COP21 talks (Pic: State Department)

Countries are committed to frequent reviews to deepen greenhouse gas cuts and will not renege on past promises.

That is France’s assessment after a three-day powwow of envoys from 70 nations intended to smooth out obstacles to a new global warming accord.

“A regular reviewing of the INDCs (hopefully every 5 years) is now widely shared among Parties,” read a summary circulated by the host on Tuesday, referring to climate plans known as intended nationally determined contributions.

“No backtracking for every country and an improvement of each countries’ INDC should be expected.”

Some 60 ministers, representing all major carbon emitters as well as small and vulnerable states, came for the so-called Pre-COP, a space for candid discussions ahead of the COP21 December summit.

UN climate chief Christiana Figueres described the meeting as the one of the “most productive” she had attended.

Canada’s new environment minister Catherine McKenna told delegates the country was “back” after years of opposition to a global deal by the previous Harper administration.

Report: How France is steering the world to a climate deal

France is undergoing an unprecedented diplomacy drive to steer countries to a meaningful pact to avoid dangerous climate change.

Over 150 countries covering some 90% of emissions have made carbon-cutting pledges, but they collectively fail in capping warming to an agreed goal of 2C.

Incoming president of the summit, Laurent Fabius, emphasised the “absolute necessity” of success, along with the UN’s top climate official and the chair of last year’s summit in Peru.

A new draft text should be “on his desk” by day six of the summit, Saturday 5 November, he requested.

Yet, in the world of fractious climate talks, that might not go to plan. The negotiating text ballooned at an October session from 20 to 55 pages, and with nearly 1,500 brackets indicating points of disagreement.

Wrap up of #PreCOP Constructive 3 days but everyone just put their favourite ingredients on the table. Now we have to cook a soup from that. — Marcin Korolec (@MarcinKorolec) November 10, 2015

Kevin Conrad, a negotiator for Panama said the French president was putting a “positive spin” on the state of talks, with countries shifting little from national pledges delivered to the UN.

“If all you are doing is voluntarily decide based on your individual perspectives what to do – then why even get together?” he told Climate Home by phone at the meeting’s close.

Envoys had converged on a “stocktake” in 2018 to deepen carbon cuts by countries Conrad said, but feared countries were “putting the hard work onto some other COP.”

“We’re only 11% down on business as usual, nowhere near to where we need to get if we were serious,” he added.

Xie Zhenhua tells me China will stand with the islands in the final hours of Paris. TdB pic.twitter.com/2IBQObD0AI — Tony de Brum (@MinisterTdB) November 10, 2015

At the meeting, two reports added urgency for negotiators to act in countering climate change.

The World Bank said 100 million more people would be living in extreme poverty by 2030 if no action is taken.

The World Meteorological Organization revealed levels of greenhouse gases in the atmosphere reached a new record in 2014, with average temperatures likely to bust 1C above pre-industrial times this year.

Some 117 heads of state including Barack Obama and Xi Jinping will kick off the two-week affair on November 30, Fabius told delegates.