Yeb Sano heads for Paris, praying for a climate miracle 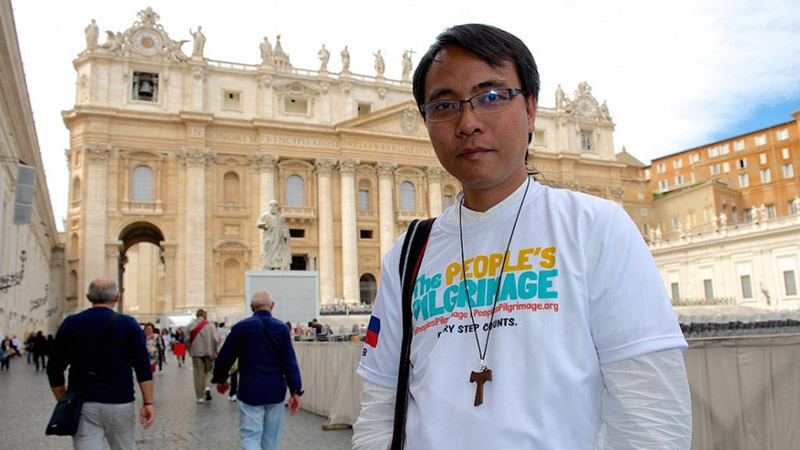 He has walked 400 kilometres in his Rome to Paris climate pilgrimage, spoken to hundreds of Italian activists and shaken hands with the Pope. And no: his feet don’t hurt.

Ex Philippines envoy turned campaigner Yeb Sano is in a bullish mood, speaking to Climate Home from Bologna, the latest stop on his march to the French capital.

“We have no illusions that any of these will change the world overnight or change the way leaders will respond, but as people of faith we carry on believing a miracle is possible,” he says.

The 2015 UN climate summit opens for business in under 50 days, a two-week extravaganza where a global deal to limit greenhouse gas emissions is expected to be struck by nearly 200 governments.

Sano plans to be there, only he has ditched the suit and tie he once sported as a negotiator, looking in from the outside on a process he was once part of.

“My message has become more spiritual, climate change is a moral issue… this is about spreading hope” he says.

As an official representing the Philippines he felt the impacts of extreme weather more than most: the country is one of the most vulnerable to tropical cyclones on the planet.

In 2012 Typhoon Bopha hit during the annual UN climate summit in Doha. A year later at the Warsaw climate summit Typhoon Haiyan smashed into his brother’s home town of Tacloban.

In the soulless bowels of Poland’s international football stadium he delivered an emotional call to arms that left many in tears.

“This process has been called a farce… an annual gathering of carbon intensive frequent fliers – but we can fix this, we can stop this madness,” he told applauding envoys.

Yet last year he disappeared from his country’s roster of officials amid a change of tactics from Manila, which left the ‘Like Minded’ group of developing countries long accused of slowing talks.

Rumours persist this was at the behest of the US and EU, keen to diminish the bloc and gain a useful ally in the run-up to Paris.

His new journey, part of a wider People’s Pilgrimage for climate change, has seen him work his way through areas hit by Haiyan on the Philippines, before taking in Vanuatu and India.

In Italy he has joined arms with protestors against the Civitavecchia power plant, which in 2008 converted from oil to coal. Locals say there has been a spike in cancer cases as a result.

For Sano, the COP21 summit and the wider climate talks are now just a part of a wider push for development and justice around the world.

“We are seeing a mixture of serious and earnest efforts to make Paris successful, but a lot of the discussions around INDCs (national climate pledges) and what they have manifested are business as usual in the sense it all is within the context of the current global order,” he says.

Sano cites Pope Francis – who blessed him before he set off on his pilgrimage – as his inspiration, citing his June Encyclical on the environment which called for governments to rethink the global economy.

It’s not an argument that went down well with economic conservatives and defenders of capitalism – but it was music to the ears of many who believe the unfettered rise of the free market has caused climate change.

And it’s a message Sano is taking with him, all the way to Paris and the Le Bourget compound where nearly 200 governments will gather to decide the climate’s fate.

He won’t be allowed inside the negotiating chambers as the agreement is pulled into shape, but he’s likely to be corralling the masses outside, hoping that their voice penetrates the UN security cordon.

“There’s an expectation that we have all created for and that is for world leaders to abandon narrow interests and to come up with a meaningful legally binding agreement… not just a political declaration which a lot of us anticipate happening in Paris,” he says.

“We all know the adjectives – ambitious, durable, equitable, fair – but all meaningless unless the agreement we see actually shows countries moving forwards, transforming infrastructure in a massive way and the economy in a profound way.”