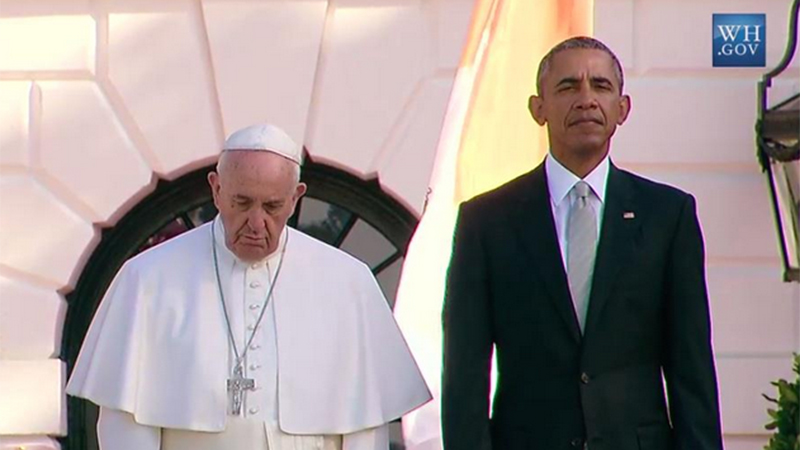 Pope Francis urged “sustainable and integral development” to protect the world’s most vulnerable at the outset of a landmark visit to the United States on Wednesday.

The Latin American pontiff, who issued an unprecedented pastoral message to Catholics to conserve the planet in June, repeated the call on a sunlit morning in Washington DC aside President Barack Obama.

His first visit to the US, Pope Francis said climate change was a “problem that can no longer be left to a future generation” and welcomed Obama’s leadership to cut greenhouse gas emissions in August’s clean power plan.

“When it comes to the care of our common home we are living at a critical moment of history,” he spoke in English on the White House lawn to crowds of supporters.

Pope Francis and President Obama wave to a crowd of 11,000 gathered on the South Lawn for today’s arrival ceremony. pic.twitter.com/Bs4zkFn4Xf

President Obama said he welcomed the Pope’s appeal to world leaders to support those affected by a changing climate.

“You remind us we have a sacred obligation to protect our planet, God’s magnificent gift to us,” Obama said.

The president has seized on the moral authority of the Pope’s visit to bolster his legacy-defining climate drive. Meanwhile, the Vatican’s posturing has rattled climate sceptic Republicans, many of whom are Catholic.

The Pope will address the US Congress on Thursday and the UN general assembly on Friday as it prepares to sign off on global development goals, which aim to eradicate hunger and extreme poverty by 2030.

Read more on: US | Barack Obama | Pope Francis US