President Obama spoke of his daughters at the Glacier meeting in Alaska, but it was a cab driver whose words hit home 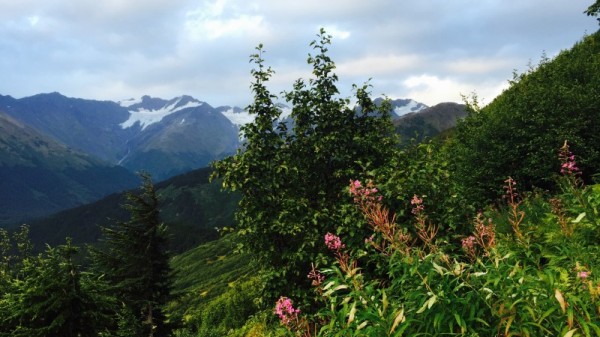 Receding glaciers on the North Face of Aleyska, in Alaska, with fireweed in the foreground. Credit: Leehi Yona

I spent the past few days in Anchorage, Alaska – sometimes in the same room as John Kerry and Barack Obama – but the most incredible words I heard came from a cab driver.

The conference I attended, the Glacier (Global Leadership in the Arctic: Cooperation, Innovation, Engagement, and Resilience) summit, brought together foreign ministers from twenty Arctic and observer nations. It was billed as a crowning moment for climate change, with both the United States secretary of state and president as keynote speakers, among a list of other high-profile attendees.

Yet, the conference has ended mere hours ago and all I can remember are the words of Agron, a kind cab driver I’d briefly met while traveling on Sunday.

(Anchorage Yellow Taxi, if you’re reading this – give the man a raise.)

Agron was remarkable not only because of what he said, but also because he said it without knowing that I was even going to the conference, let alone that I am a climate justice organiser.

“Something is going on here,” he said. “I’ve been in Alaska seventeen years, and every year it is getting warmer. I didn’t even use my snowblower once this winter.”

But here’s where it gets better: “We need to do something, but people are scared of what climate change will do and scared of changing. Don’t get me wrong. I love my 700 horse power car. You have no idea what muscle cars I have right now. I love cars like Jay Leno.

“But I have three kids. I think of my children and grandchildren, and I’d be willing to give it up for them. People are selfish and greedy, but we need to care for future generations.”

And, the kicker: “I’m not a scientist, but there are some facts you can’t ignore. You gotta be a dumb*ss not to realize something is happening.”

When I told him I was going to Glacier, he encouraged me in a way that no adult has before, let alone a complete stranger. “Raise your voice! Wherever you go! No matter how important the people there are. Young people, this is your future!”

We are young, and terrified. President Obama delivered a speech documenting how bad things would get in the Arctic. “We will condemn our children to a planet beyond their capacity to repair,” he said.

My future. Our future. My generation. Much as I hate to admit it, tears rolled down my cheeks.

But beyond the sob story, the tokenising of young people as “the future”, we were left voiceless at this conference. We were sidelined, kept for photo opportunities.

An Arctic Youth Ambassador program was created, so young people could “blog” and “tweet” but not be given a seat at the table. Of the dozens and dozens of speakers at Glacier, not a single person was young, let alone a young woman and/or person of colour. In fact, while ceremonial statements were delivered, not a single tangible action served as an outcome to the conference.

What does that say about how much these world leaders value our future?

Obama and Kerry spoke of us. They spoke of the horrors their generation is bequesting to us. Obama spoke of his daughters, of the need for us to act in Paris this December for future generations. He spoke of what was at stake.

When I came to Alaska last week, I went hiking. Only when I saw glaciers again did I realize that I’d left parts of my soul strewn across the Arctic, scattered among the fireweed.

My heart breaks for the immense love and fear I hold for this place. I wonder how long it will take for decision makers’ love for their children, for the world, to overcome their fear of change.

Do we love ourselves enough to leap and make this world better?

As I left the cab Sunday, I thanked Agron and asked him to keep talking to his riders, especially if he comes across a government representative.

“Don’t worry,” he said. “I plan on talking to all the old farts about this.”