Climate change is a matter of human rights, agrees UN 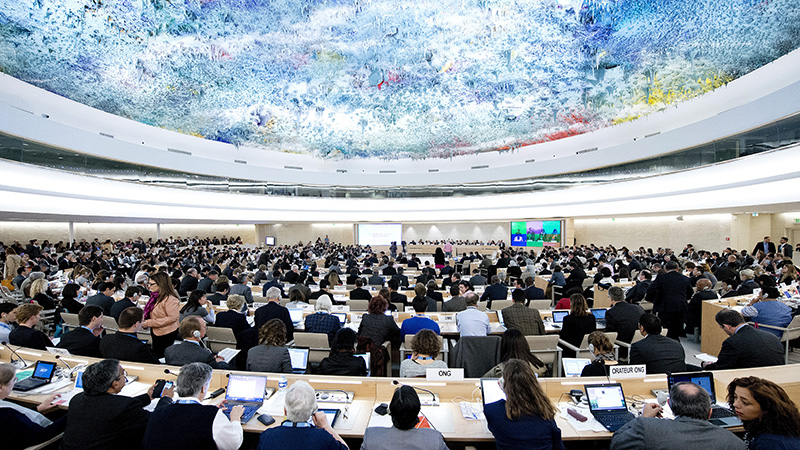 By Sébastien Duyck in Geneva

Last Thursday the Human Rights Council sent a strong signal to the ongoing climate negotiations by adopting by consensus a new resolution on climate change and human rights.

The resolution, championed by Bangladesh and the Philippines, emphasizes the importance of addressing the adverse consequences of climate change for the human rights of all, and in particular of those most vulnerable.

It also stresses the importance of enhanced action and cooperation on adaptation.

Additionally, the resolution calls for the Council to consider next spring how climate change adversely impacts the efforts of states to promote and protect the right of everyone to the highest standards of physical and mental health.

The document also mandates the Office of the High Commissioner for Human Rights to prepare, together with relevant international organizations, a report on the subject.

Whereas attempts to adopt a similar resolution failed last year, Bangladesh and the Philippines managed to secure very broad support for the resolution this year, as over 100 states – developed and developing alike – accepted to co-sponsor the resolution.

And while it is the fourth resolution adopted by the Human Rights Council on the matter, the implications of this adoption five months before the Paris climate conference should not be underestimated.

When introducing the draft resolution to the Council, Ambassador Shameem Ahsan (Bangladesh) emphasized the importance of the adoption of a resolution on this topic this year.

“The timeliness of this resolution cannot but be stressed as the world witnesses growing climatic vulnerability while walking on developing a robust and legally-binding outcome this December in Paris”, he said.

The resolution includes several references to the provisions of the UN Framework Convention and Climate Change and to a decision adopted in 2010 under the aegis of the UNFCCC, and welcomes the upcoming Paris climate conference.

The adoption of this resolution by consensus might thus inform the ongoing climate process.

Climate negotiators are indeed contemplating whether to refer explicitly in the Paris agreement to the importance of integrating human rights to all climate-related actions.

Additionally, they are considering how to acknowledge the circumstances of the countries must vulnerable to climate change.

The resolution does not make any specific suggestions with regards to the outcomes of the Paris conference, but some countries expressed concerns about risks that the human rights council might, in the words of the US Representative to the Human Rights Council David Sullivan, “intrude on expert climate change negotiations taking place elsewhere.”

These concerns highlight the political difficulties associated with ensuring coherence between two international legal frameworks and the importance for states to consider the linkages between their human rights obligations and the ongoing climate negotiations.

The “Geneva Pledge on Human Rights in Climate Action” constitutes one ongoing effort to address these difficulties.

Launched in February under the leadership of Costa Rica, the pledge constitutes a voluntary commitment by signatory states to strengthen expertise on the interplay between human rights in climate change. 20 countries have signed the Pledge so far.

The fact that the Human Rights Council has now acknowledged this initiative in last week’s resolution will contribute to increase the legitimacy and visibility of the pledge, potentially prompting more states to join these efforts.

Cecilia Rebong, Permanent Representative of the Philippines to the UN, commented that “the adoption of this resolution by consensus brings out a message, loud and clear, that the UN Human Rights Council has one voice in addressing the adverse impacts of climate change”.

The coming months will tell us whether this unity can be replicated in the context of the ongoing climate talks as negotiators will decide whether the Paris climate agreement can contribute to addressing climate change while promoting human rights.

Sébastien Duyck is a researcher at the Arctic Centre with a specific focus on environmental governance and human rights. Follow him on twitter @duycks