Free from direct military rule, Myanmar is embarking on ambitious energy reforms, but renewables look set to miss out 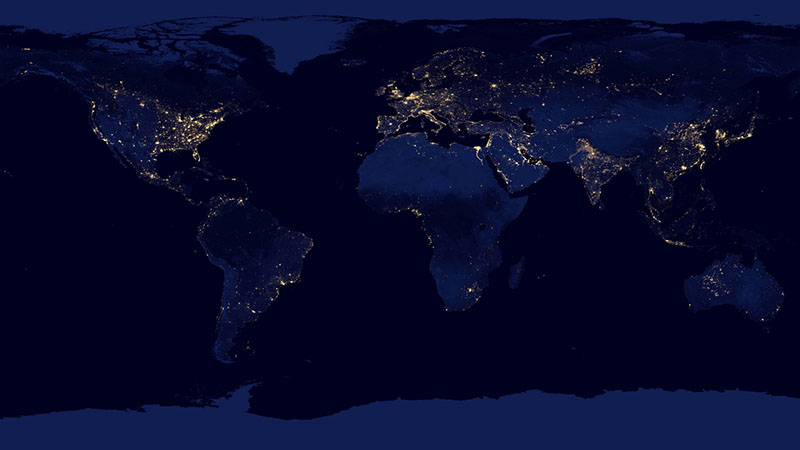 Space station shot shows how low electrification levels are across parts of the planet (Pic: NASA/Flickr)

As night descends on South East Asia, astronauts in the international space station peering out of their portholes see a mass of twinkling lights in India and China.

In between these superpowers are webs of brightness from Bangladesh and Thailand. And in between those two countries – darkness.

That’s Myanmar. You can spot small yellow spots where the citizens of Yangon and Mandalay enjoy power. But it fades fast outside the major urban areas.

The government has a massive problem. Only one in three of the country’s 53 million citizens has access to electricity, but as it opens up to the world, those people are demanding change.

“If our country is not economically strong, it will face underestimation and unfair treatment from other countries,” said President U Thein Sein in his 2011 inauguration speech.

A central part of state planning since his accession has focused on energy.

In April, the Thai engineering company Toyo-Thai Company Limited (TTCL) and Myanmar’s power ministry signed an MOU on the construction of a $2.8 billion plant in the eastern state of Mon.

The planned coal-fired station will have a generation capacity of 1.3 gigawatts. That’s nearly as much as the country’s total capacity of 1.5 GW.

Not everyone is happy. Last week, 5,000 locals took to the streets in Mon state to protest against the coal plant.

Myanmar has a long and sorry history of human rights abuses linked to industry and resource extraction. Since limited democracy has taken hold many of those voices against in the industrialisation of thecountryside have become emboldened.

Chanting “No coal, no Toyo-Thai – protect our environment” they staged a sit-down protest in Andin Village, some fearful of the health effects fumes from coal burning could have on their families.

Many of the protestors feared they could lose their lands. Once a region is designated a “special economic zone” citizens can find themselves moved against their will to new houses.

“The government should listen to the people. They don’t want the coal project in their area,” local MP U Aung Naing Oo told the Myanmar Times.

It’s likely too late for these protestors. In April the president was photographed thanking TTCL chief executive Hironobu Iriya for his investment and encouraging more in the future. 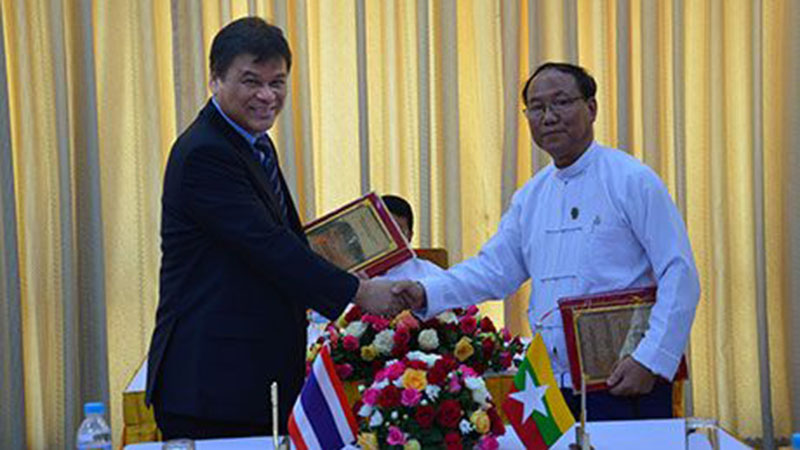 TTCL and subsidiaries have agreed to start work on a giant coal power plant in the east of the country (Pic; TTCL)

Myanmar has another problem that looms on the horizon. Climate change. It’s estimated to be one of the most vulnerable countries to extreme weather in the world.

Last October the president warned citizens of the dangers they would face from rising sea levels, which he said were already impacting some cities.

“We will continue to face increasing weather-related issues due to climate change,” he said. “Indeed, our country experienced a cyclone that claimed over one hundred thousand lives.”

It’s between these two rocks the military-dominated administration has to tread – and so far it seems like it is choosing power over the environment.

Coal is the most carbon intensive form of fuel, and the major source of greenhouse gas emissions.

Wipe out coal and the climate challenge looks a lot easier. But that’s not happening in South East Asia,

“In each country in the region there are plans for coal,” says Jean-Philippe Denruyter, WWF’s Myanmar spokesperson.

“In Laos, Cambodia and Myanmar there are plans for coal. It’s difficult – there are a lot of vested interests and lobbying from the coal sector.”

Green groups say the government should look to renewable sources of energy, such as wind, solar, hydro – perhaps even geothermal – to meet rising demand.

But these look incompatible with the government’s plan, which is a grid-based power system that Denruyter calls “old fashioned” and will likely favour coal, gas and big hydro.

It’s not just the government at work here. The World Bank and Japanese International Cooperation Agency (JICA) have been hugely influential in determining its strategy.

Masahiko Tanaka, JICA’s lead official in Myanmar, recently argued the government should be “open-minded about all possibilities, including coal.”

JICA is open in its view that backing efficient coal is a climate-friendly solution, and has invested in similar plants in Indonesia and Thailand.

The World Bank has pledged $1 billion to help construct a functioning grid, and says it wants to see a mix of on and off-grid solutions, with “solar home systems” for remote regions.

It too does not rule out the use of coal to meet Myanmar’s future energy needs, although as the bank’s climate envoy Rachel Kyte told RTCC in a conference call, “we are not involved in [Myanmar’s] fossil fuel plants”.

The main focus of its work in the country was on building the renewable energy sector, she stressed.

For Denruyter, it’s frustrating that given a blank sheet, the government and top funders are veering towards an old and polluting formula.

“The economic benefits of coal compared to solar and wind are not obvious anymore,” he says. “If you include pollution that’s another debate.”

There are some bright chinks for clean energy investors. In 2014, US based ACO Investment Group agreed a $480 million package to build two 150MW solar plants in Myingyan and Meiktila districts.

But this looks like an exception. Alex Sundakov is executive director at Castalia Advisors, which worked with the World Bank and government on its National Electrification Plan, developing a “prospectus” for investors.

Within the government he says there is an “intense debate” on its energy strategy, but concedes that “many” advocate coal plants on the coast next to major cities.

He argues grid solar is still too expensive – but that it offers potential for street and traffic lights.

Gas resources in the north have been developed by Chinese companies, which pump the gas across the border and sell Myanmar back the electricity it generates – at a higher price.

Coal, on the other hand, offers the government an opportunity for independence. But this will be limited.

The country’s own coal deposits – while significant – are low quality and deemed to hold too much moisture.

“There are very large amounts of seaborne coal trade,” says Sundakov. “You have Australia, Indonesia, the US – it’s pretty diversified and not that difficult.”

Still, experts reckon Myanmar will need a new deep sea port to handle millions of tonnes of coal every year, with deliveries every 10 days.

The proposed Mon coal plant alone will use 4 million tonnes a year when it comes online in 2019.

That will likely lock Myanmar into coal to 2050 and beyond, when scientists say the planet needs to be heading towards a zero emissions trajectory.

And it underlines once again the huge challenge facing the international community as it plans to sign off a global climate pact in Paris later this year.

“Is everyone moving as fast as you would like? No, ” says the World Bank’s Kyte, who believes patience is required with developing countries where the politics for cutting emissions may be weaker.

“Is it easy for everyone to wean themselves off [fossil fuels]? No –  it’s a transition.”