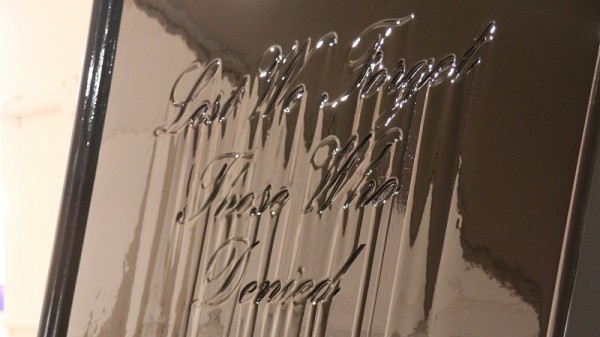 Engine oil pours over the inscription: “Lest we forget those who denied” (Pic: Anglia Ruskin)

“Lest we forget those who denied” is the inscription on a 2.2m high monument, slick with a cascade of engine oil, on display at Anglia Ruskin University.

Below are the names of six UK figures known for their hostility to action on climate change: politicians Nigel Lawson, Christopher Monckton and Owen Paterson and commentators Melanie Phillips, James Delingpole and Christopher Booker.

“With this work I envisage a time when the deliberate denial of climate change will be seen as a crime because it hinders progress towards a low carbon future,” he explained.

Aled Jones, director of Anglia Ruskin’s Global Sustainability Institute, said: “The winner was chosen because of the way they approached their subject by bringing together a powerful message with a beautiful piece of art.

“The oil waterfall sculpture could be viewed in decades to come as a monument to a period of history that saw scientific knowledge battle to be heard above political ideologies.”

@JamesDelingpole The warmists have put you on an art instillation for your ‘denial.’ Its a bit creepy really, http://t.co/CGev3E12WP

@K_Niemietz @liamdeacon Jealousy well get you nowhere, mate. I am ART.

Delingpole appeared unconcerned to see himself represented as one of a dying breed. Asked through twitter how he felt about the artwork, he replied with one word: “Flattered.”

In a blog on his Breitbart News Network site, Delingpole wrote he was “hugely proud to find myself in the distinguished company of some of Britain’s finest journalists and most brave and outspoken politicians”. 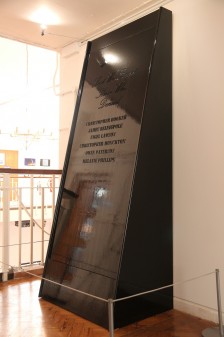