Why are UK politicians so poor at explaining climate risk?

Offered an hour on the BBC to explain why global warming should matter, Britain’s wannabe lawmakers failed miserably 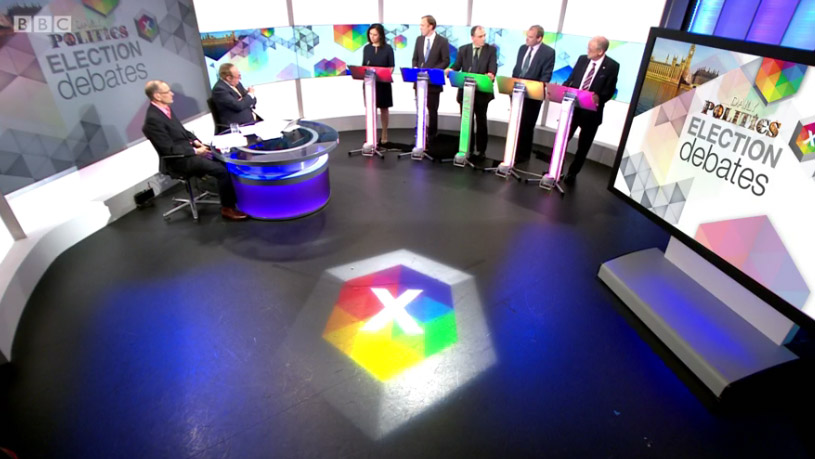 What have Mick Jagger, fox hunting, one million trees and the medieval warm period got in common?

Correct. They all made it into a live one hour BBC debate on the environment and climate change.

The Conservatives, Liberal Democrats, Labour, UK Independence Party (UKIP) and the Greens were represented, with the election looming on May 7.

This was an opportunity to drive the message of climate risk to a wide audience (or whoever watches political programmes at 2pm on a Monday).

We’re talking security, the costs of extreme weather, geopolitics and best/worst of all – domestic energy bills.

Host Andrew Neil, who has shown sympathy to climate sceptic arguments in the past (see here and here) without, it should be said, taking sides, started the fun by asking the panel for their views on global warming.

The man made element was all made up, replied Roger Helmer, energy spokesperson for UKIP and proud owner of a Freddie Mercury handlebar moustache.

“There is a left wing tendency to jump on new ideas,” said Helmer, trying to explain why most sceptics are on the right of politics.

Climate change was a “speculative theory” he said. No-one he met on a doorstep while canvassing had raised the issue. It was warm in the medieval times too.

He had confidence ocean acidification wasn’t as serious as scientists were warning: “ocean acidity on geo-historical levels is very low indeed,” Helmer added.

No matter these theories are well-rebutted climate sceptic memes, they made Roger glow with an aura of knowledge. 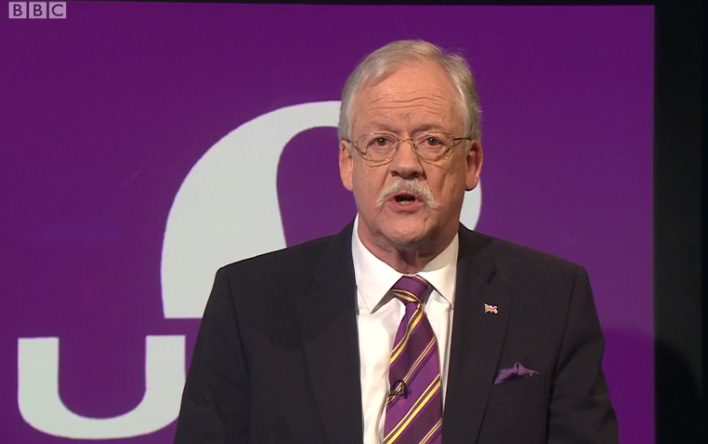 In contrast his fellow panellists, who expected to be discussing policy and their huge manifestos, seemed stunned to be facing such expertise.

“It is simply not the case” mumbled Ed Davey, UK energy and climate chief from 2012-2015 and a Liberal Democrat fighting for his political future.

He looked like he could barely believe he was unlucky enough to be stuck on the same panel as Helmer, preferring to pretend he wasn’t actually there at all.

Eyeballing Roger from the other end of the panel, Caroline Flint, Labour’s combative shadow energy minister, said he was placing people “at risk” by ignoring future climate impacts.

Matthew Hancock, the Conservative, stood stoically still. He knows better than to engage with UKIP, a party born of frustrated right-wing Tories tired of what the prime minister once called “green crap”.

It was left to Roger Harrabin, the BBC’s environment analyst, to save the politicians from their own mess.

Looking vaguely irritated at the lack of scientific knowledge arrayed before him, Harrabin intervened to set the record straight.

The recent pause in global warming was not well expected, he said, responding in part to Helmer’s thesis that scientists and their models are not to be trusted.

But scientists were still confident temperatures would rise, “as are many climate contrarians in this country,” he thundered.

@STindale Lively with plenty of unchallenged bull. Debate with 5 people is not good format to get to bottom of facts.

Exhibit B of how weird the UK climate debate can get came when Andrew Neil asked the panel about the 2014 floods, estimated to have caused £1.2 billion in damage.

Matt Hancock, a Conservative minister in the coalition, said they demonstrated the “very significant risks” posed by climate impacts.

“There is no doubt there are changes in the climate, highly likely to be manmade,” he said, but at the same time insisted any response had to be careful and cautious. “To go further would increase costs.”

That’s not what the UK’s Committee on Climate Change and the UN’s IPCC climate science panel recommend. Both have called for tough, radical action to avoid future billion pound bills.

Labour’s Flint seemed to agree. “We need a proper long-term plan to build resilience in,” she said, without really explaining to viewers what that means.

Davey’s answer to the flooding – caused he said by climate change – was to go green. “That’s why we need to invest seriously,” he said.

Why then, asked Neil, did the last government (which Davey and Hancock were part of) cut funding for flood defences by 10% in real terms?

It was a day for grown men to wear inflatable armbands, as the pair floundered on the flooding figures.

What’s disappointing is not the fact politicians bicker. That’s what they’re paid to do in an election, and this type of format doesn’t make for reasoned discussion.

It’s that they all – in my eyes – failed to convey a clear understanding to non-expert viewers of why climate change is a serious issue.

There was intense focus on energy bills but little on how houses and businesses can be helped to save energy – a key failing over the last 5 years.

Flint and Davey briefly talked about the Paris climate summit later this year, where nearly 200 countries are set to meet and finalise a greenhouse gas reduction pact.

Whatever your climate persuasion, it’s arguably the most important UN treaty under discussion for a generation. It merited less than a minute. 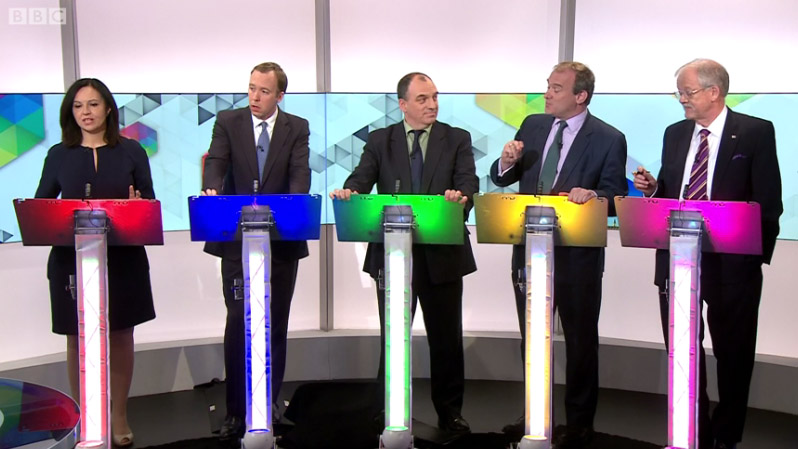 Exhibit C (relax – it’s the final one). “I don’t think people realise how much power we will need,” said Ed Davey, offering a ray of sunshine long-term thinking.

According to the New Climate Economy report, in next 15 years energy demand will grow between 20-35%, requiring $45 trillion of investment.

These, say analysts, are now one of the cheapest forms of clean energy available in the UK.

Ditching turbines was like saying “you like the Rolling Stones and not Mick Jagger” said Ed, ignoring that it’s a policy enthusiastically backed by the second best-known Stone, Keith Richards.

Hancock was having none of it. The government had to cut CO2 he said, but “in a way that doesn’t cost the Earth. We must consider the beauty of our green and pleasant land.”

You wonder if, one day, he’ll look back and try and work out if that last sentence makes sense.

You wonder if, one day, all five of these politicians – mostly decent folk – will look back and wonder what on earth they were babbling about for an hour.

Sadly, all viewers are likely to remember is 70-year-old climate sceptic Roger Helmer reciting a series of tropes on why scientists have got it wrong.

He’s entitled to his views, but not his own facts.

The poor rebuttals from his fellow panelists – three with ministerial experience – on what is such a critical issue made for painful viewing.