The UK’s leading left-wing party has sound plans for the climate, argues Stephen Tindale, but should reject airport expansion 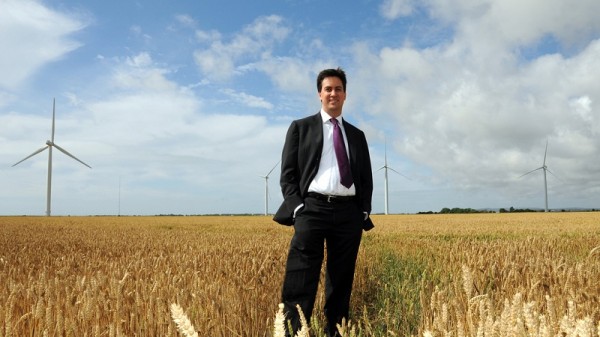 “The aims we have championed throughout our history – from decent living standards for working people, to care for the vulnerable, and a route out of poverty for those in the developing world – are all at risk from spiralling global temperatures. Not just in highly vulnerable countries fighting their way out of poverty, but here in the UK too.”

These words are from the foreword of Labour’s green plan, signed by Ed Miliband, Caroline Flint and Maria Eagle. They are absolutely right.

Climate change is not just an environmental issue, not just about saving penguins and polar bears. It is a public health, social and economic issue too.

I’m a Labour party member, so am not wholly impartial. But I think that with this green plan, and its manifesto, Labour has joined the Liberal Democrats in joint first place on climate proposals.

Climate protection will not be cheap. However, the Labour plan agrees with the 2006 Stern report on climate change that delaying action will mean that the cost increases. And it stresses that there are major economic opportunities for British business if the UK decarbonises.

The document is strong on energy efficiency, promising that 5 million homes will be upgraded over the next decade and that 200,000 people at risk from fuel poverty would receive free energy efficiency help every year.

Labour accepts that renewables, nuclear and coal and gas with CCS are all required. So a Labour government would set up an Energy Security Board to advise on what mix of energy sources is needed.

This may not sound very exciting – yet another quango– but could actually be helpful in overcoming the technology tribalism which bedevils so much energy and climate debate.

Business needs clear regulatory signals. Enormous investment is required, so the signals should be given as far in advance as possible. Labour’s promise to pass a law requiring electricity to be essentially carbon-free by 2030 – a policy shared with the Liberal Democrats – is therefore sensible.

So, for the Greens, gas is a sufficiently low-carbon bridge technology until the UK gets all its energy from renewables. This is a bad approach: unabated gas emits ten times as much greenhouse gas pollution as nuclear does, and at least twice the level of gas with CCS.

The carbon footprint of gas generation increases if the gas is imported as Liquified Natural Gas. Shale gas, if properly regulated, has lower emissions. But the Green party, like the green pressure groups, opposes fracking.

Labour says that the new type of subsidy scheme, Contracts for Difference (CfDs), which were introduced by the current coalition government in 2013, will continue.

CfDs are not perfect, but regulatory stability is welcome. Labour is committed to revamping the electricity market, to separate generation and supply. So another change to the support mechanism for low-carbon electricity would have introduced unnecessary instability.

On renewables, Labour says that it will not cut support for onshore wind. The Conservative manifesto proposes an end to subsidy for this, which would mean either increased bills – because more expensive renewables would have to be subsidised – or the burning of more fossil fuels.

The green plan also promises that a Labour government would promote community energy.

The coalition has done well on this: Liberal Democrat Chris Huhne changed the rules to allow local government to sell renewable electricity (which had been illegal since the 1970s) and Conservative energy minister Greg Barker championed community energy throughout his four years in post.

Labour’s plan includes an initiative to minimise the regulatory burden on communities wanting to create energy companies. This is sensible: the cost of obtaining supply licences can run to half a million pounds so is blocking many councils and community groups from setting up energy companies.

The UK has much to learn from Germany, Austria and the USA on community energy (as Prashant Vaze and I argue in our book Repowering communities).

Unsurprisingly, the document promises that a Labour government would work hard for a deal at the UN climate summit in Paris in December. It repeats the pledge, contained in Labour’s main manifesto, that climate change will be at the heart of foreign policy.

The green plan is strong on climate justice – the developed world must pay much of the developing world’s adaptation and mitigation costs, as compensation for our past pollution.

This does not really differentiate Labour from the Conservatives: David Cameron’s government has met the longstanding UN target to allocate 0.7% of national income to overseas development, which Labour never did in its 13 years of government.

Labour also emphasises the role of the EU in climate policy; this does differentiate them from the Tories. Labour calls for the EU to be more ambitious than the proposed 40% reduction in greenhouse gas emissions at the Paris conference.

The EU will almost certainly not increase its offer before Paris in December, but could do so during the negotiations. The UK will obviously have greater influence in international negotiations if it works closely with EU partners.

Ed Davey has done well on this; he has been a leading member of the ‘green growth group’ which promotes climate policies that will strengthen economies.

Overall, Labour and the Liberal Democrats have the most sensible climate policies of the political parties.

There is, though, one issue on which the Greens have the best approach: they would stop airport expansion.

The Lib Dems face both ways on this issue: they oppose new runways at Heathrow, Gatwick or Stansted and want no net increase in UK runway capacity, but will “carefully consider the conclusions of the Davies Review into runway capacity and develop a strategic airports policy for the whole of the UK in the light of those recommendations and advice from the Committee on Climate Change”. Plenty of political wriggle room there.

Labour’s green plan doesn’t cover airports, but its manifesto says that: “Following the Davies Review, we will make a swift decision on expanding airport capacity in London and the South East, balancing the need for growth and the environmental impact.”

The Tories are waiting for the Davies Review too. This will be published conveniently – and cynically – after the election. There will not be a Green government, and either a Tory-led government or a Labour-led government looks likely to accept the recommendation.

The Lib Dems are unlikely to make this a ‘red line’ issue, assuming they win enough seats to be part of coalition negotiations.

Let battle be joined – non violently – after May 7th.

Stephen Tindale (@STindale) is a climate and energy consultant. He blogs at www.climateanswers.info.