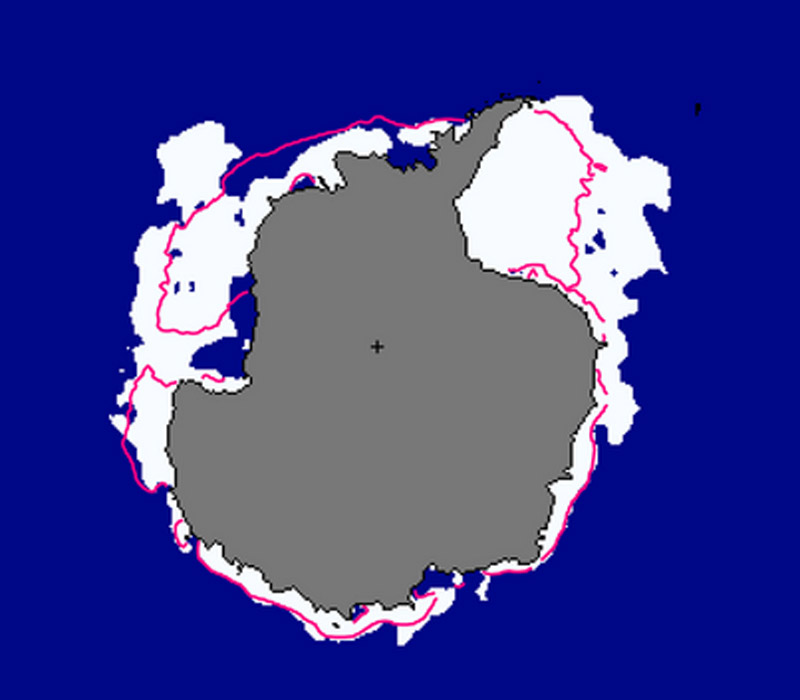 Antarctic sea ice as visualised by NOAA. The pink line is the median extent of ice from 1981-2010 (Pic: NOAA)

By Ed King and Sophie Yeo

Sea ice coverage in the Antarctic continues to increase, according to data released on Thursday by the US National Oceanic and Atmospheric Administration (NOAA).

The growth came in a month NOAA says was the second warmest January on record since 1880, 0.77C above the 20th century average.

Here’s what he had to say:

“The reason it was a record in January was wind patterns in the time between December and January but Antarctic sea ice has been very high – record breaking high – for much of the last two years, and that’s more of a mystery.

We can talk about wind patterns pushing things around and making things more extensive, but there’s a broader underlying question and that is these wind patterns we are seeing are not necessarily record breaking or extreme, yet sea ice is record breaking and extreme – so why are we seeing high levels of sea ice now when for the past 30 years we’ve seen climate patterns come and go, and ice has stayed within a certain range of extent?

And that’s more of a mystery. I don’t want to claim it’s something that we understand completely. Many folks – John Turner for example, at the British Antarctic Survey – say this is within the realm of natural variability.

I don’t particularly agree with that. I think there must be some other factor going on, and there’s a couple of ideas for what that might be.

The ozone hole is just beginning to decrease in intensity and that had an impact to strengthening the tendency towards circumpolar winds around Antarctica. As that fades, we’re seeing less of a tendency to hold everything close to Antarctica and more variability perhaps in the weather. It’s very controversial.

Another hypothesis that has been published is the extensive amount of melt that has been going on around the perimeter of Antarctic. What you have is very thick ice well below the surface of the sea coming in and meeting the ocean.

Mostly what it means is this cold slightly fresh water is conducive to sea ice formation. It doesn’t mix very well with warm water below it or around it. This may be a factor in producing more ice around Antarctica because of this slight freshening and melting around the edges of Antarctica.

Antarctica is definitely seeing the effects of climate change. Temperatures on the continent show profound warming in the peninsula and west Antarctica.

This increased sea ice is happening despite global warming and in part the wind changes that we’ve seen pushing the ice out into the ocean further away from the continent, the changes in those wind patterns have to do with global warming and possibly the reduction in the strength of the ozone hole. So that complex system is to blame for seeing these trends for more sea ice surrounding Antarctica.”