How climate change is making its mark on the world – pictures

NASA gallery reveals how global warming is taking its toll on the planet’s glaciers, lakes and forests 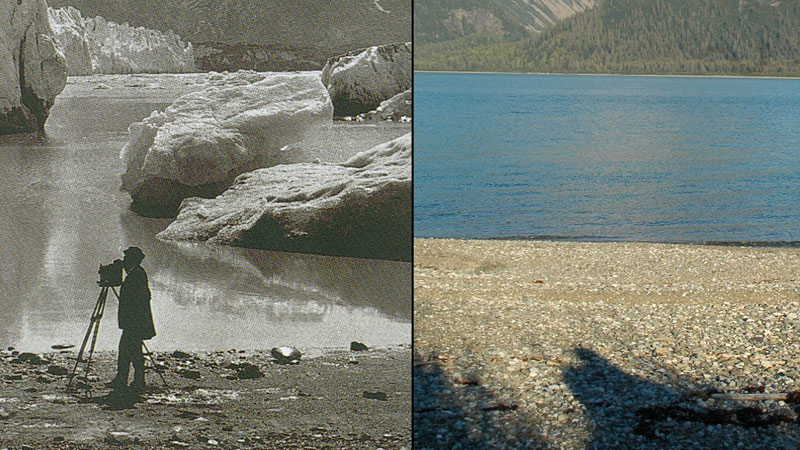 The melting of the Muir Glacier in Alaska, 1891 and 2005 (Pic: G.D. Hazard in 1891 and by Bruce F. Molnia in 2005. Courtesy of the Glacier Photograph Collection. Boulder, Colorado, US and the National Snow and Ice Data Center/World Data Center for Glaciology)

Over the last century, climate change has transformed the surface of the planet.

Since the industrial revolution, humans have pumped more than 1,890 gigatonnes of carbon dioxide into the atmosphere, warming the planet by around 0.85C.

This heat has resulted in glaciers retreating, lakes shrinking and droughts spreading. Some areas of the world have changed beyond recognition, and some of the damage is irreversible.

In a series of almost 300 images taken by cameras and satellites, NASA has illustrated where climate change is already scarring the face of the earth.

Glaciers are one of the most sensitive natural landscapes to the impacts of climate change. These images from 1941 and 2004 capture the dramatic changes to the Muir Glacier, which in this period retreated more than twelve kilometers and thinned by more than 800 metres. Now, ocean water fills the valley instead of ice. 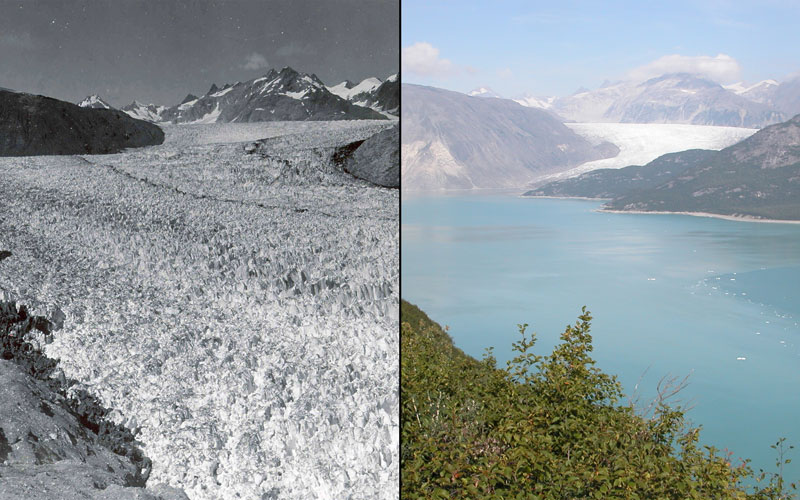 The Qori Kalis Glacier in Peru is one of the few tropical glaciers left in the world, but it is disappearing fast, retreating at around 600 feet every year. This spells trouble for the hundreds of thousands of people in the Andes who depend on the glacier for their water supply. These images compare the glacier in 1978 and 2004.

These images from 1986 and 2007 show changes to the glacier that sits atop the Cotopaxi Volcano in Ecuador. Its meltwater provides fresh water and hydroelectric power to the people of Quito, the country’s capital city. But thanks to climate change, the glacier is shrinking at an ever faster rate. Between 1956 and 1976 its mass decreased by 30%, and another 38.5% between 1976 and 2006. 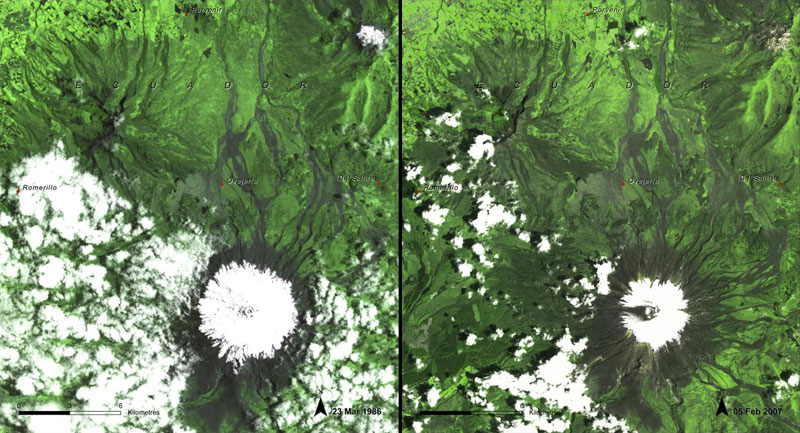 These images, taken before (June 28 2013) and after (November 11 2013) Typhoon Haiyan swept through the Philippines, show changes to the Agno River on the island of Luzon. The typhoon, which was made more likely due to climate change, caused the river to swell enormously and flood the Agno River Valley, which is home to more than 2 million people. 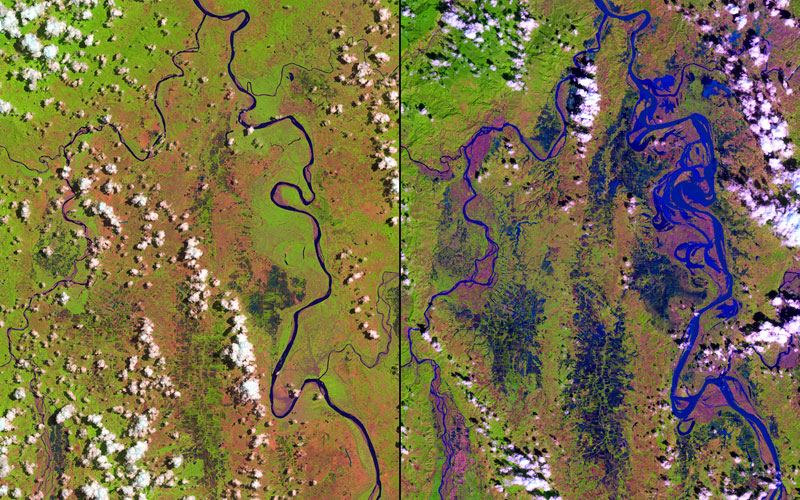 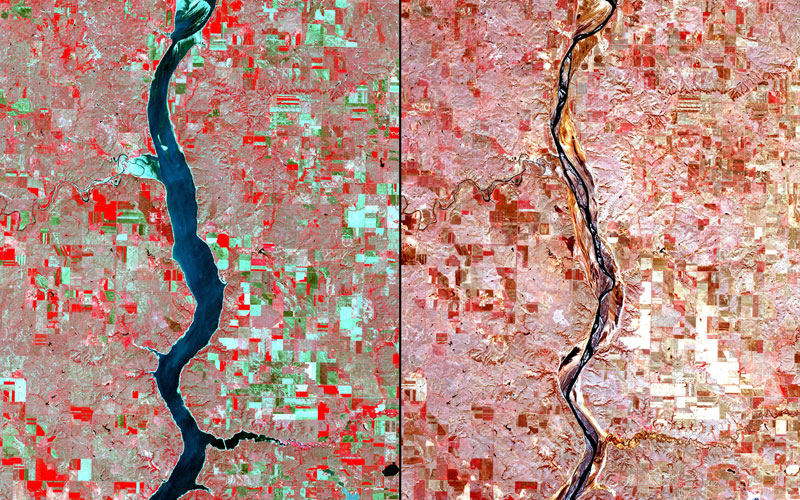 These images, from 17 May and 24 October 2013, show the impact of Typhoon Nari  and heavy seasonal rains on Cambodia’s Mekong and Tonlé Sap Rivers. More than half a million people were affected by the flood, and more than 300,000 hectares of ice fields are believed to have been destroyed. 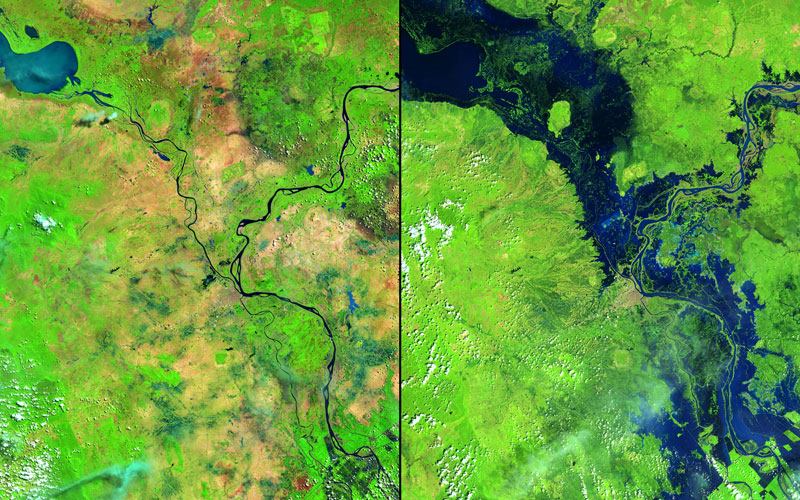 These images, taken on 27 June and 5 July 2010, show the extent of the wildfires that swept across Russia thanks to an extreme heatwave and drought. Scientists have said the heatwave was made three times more likely due to climate change. This image shows around 3,000 acres of burned area along the Volga River in shades of red, as well as smoke from the fires still burning. 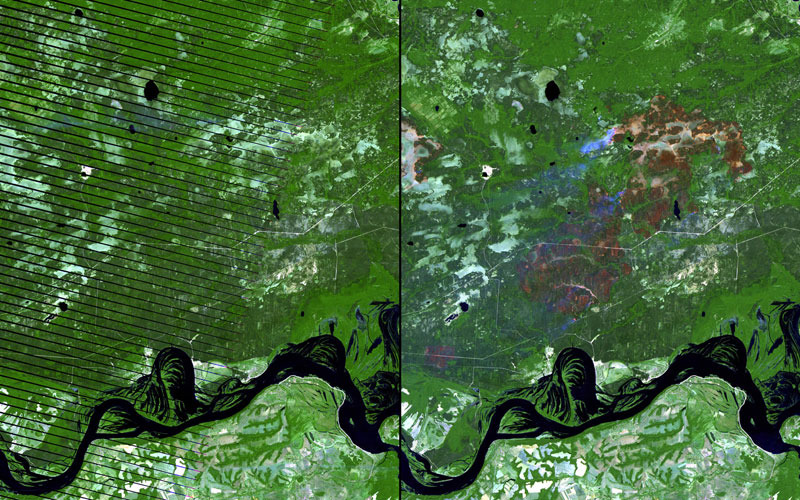 These two pictures compare the Elephant Butte Reservoir in New Mexico between 2 June 1994 and 8 July 2013. That summer it dwindled to its lowest level in 41 years, despite monsoon rains early in early July. The lefthand image shows the lake about 89% full; the right shows it at 3%. Low spring runoff from the mountain snow and poor rainfall left 80% of New Mexico facing either “extreme” or “exceptional” drought. 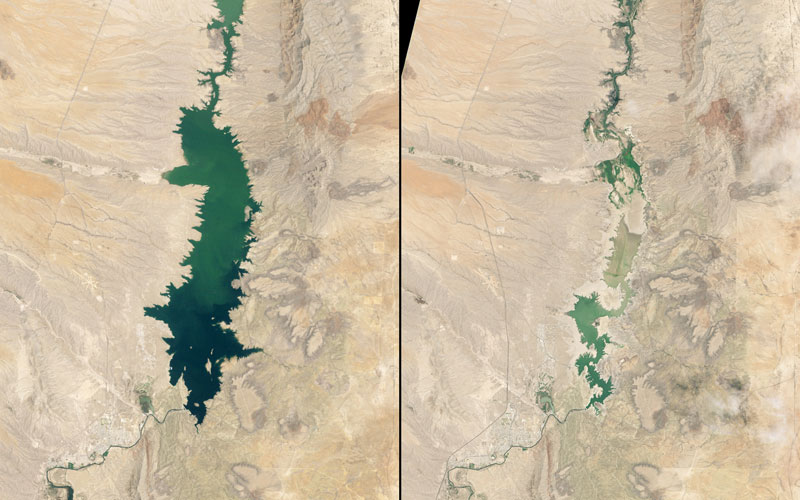 These images from 28 June 1975 and 16 August 2009 show changes over time to Rondônia, which has the highest deforestation rate within the Brazilian Amazon. The destruction of rainforests contributes to climate change, as trees absorb and store carbon dioxide. By 2008, more than 34% of the area had been deforested, due to population growth, the wood industry, road expansion and agriculture. 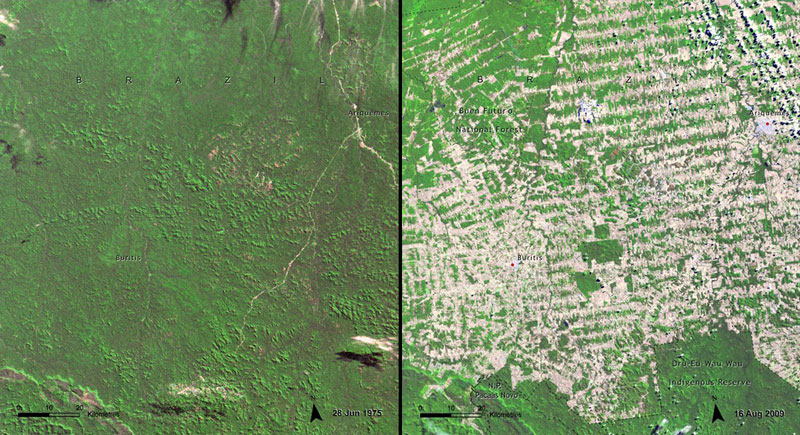 These images, from 2005 and 2011, show that it’s not all bad news. The red areas indicate levels of high nitrogen dioxide, primarily caused by vehicles and coal power plants. These vivid splashes across the map have decreased dramatically, despite higher populations and more cars on the road, thanks to new regulations, technology improvement and economic changes.

These pictures, showing the same area of Spain on 5 September 1987 and 12 September 2013, illustrate the growth of solar power. Andasol 1, 2 and 3 are solar thermal collector stations installed between 2009 and 2011. Together, these plants cleanly generate electricity for up to 200,000 people. 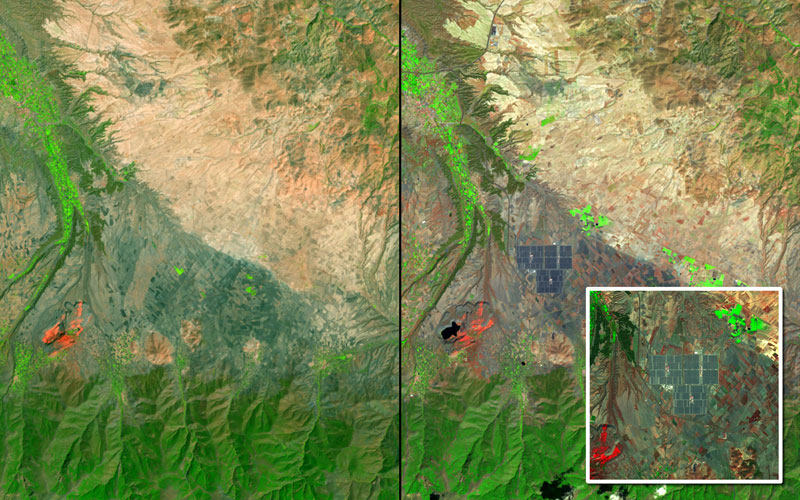 With thanks to Thet Htoo Aung for technical assistance