Is it time Taiwan took a seat at the UN climate talks? 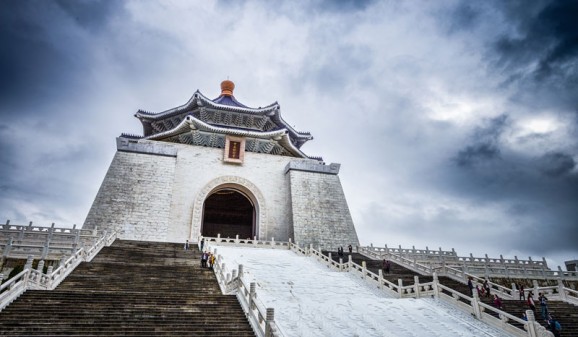 A memorial to Chiang Kai-shek, who ruled China for 22 years, and Taiwan for 30 (Pic: See-ming Lee/Flickr)

By Megan Darby in Taipei

“It is high time Taiwan’s participation in the international arena should not be dictated by the Beijing government, so we can choose our own destiny.”

In three days of journalist briefings with government officials in Taipei, Joseph Hua of the Mainland Affairs Council is the only one brave enough to venture a personal opinion about his island state’s predicament.

The matter at hand is Taiwan’s bid to be allowed into UN climate talks as an official observer, as negotiators close in on an international deal to be struck in Paris next year.

This status, which stops short of full membership, has been accorded to Palestine and the Vatican.

It seems a modest enough ambition, but there is a major obstacle that Taiwanese officials are reluctant to name.

They talk about “our big brother”, the “good neighbour across the [Taiwan] Strait” or “international politics”.

Privately, they can be more forthcoming about the issue that dominates Taiwan’s politics: its relationship with China.

The People’s Republic of China resists most attempts at international diplomacy by Taiwan, and the UN climate talks are no exception.

With its population of 1.3 billion, surging economy and a quarter of the world’s greenhouse gas emissions, mainland China is a superpower the rest of the world cannot afford to ignore.

It counts Taiwan, with its 23 million people and 1% of world emissions, as a province. But it has no control over Taiwan’s policies, which are made by a separate, democratically elected, government.

Only 22 countries formally recognise the island as an independent state. And allies like Panama, Kiribati and Burkina Faso do not have the clout to win Taiwan entry to the UN.

“We recognise this international reality,” says Hua. “That does not mean we accept that reality.”

Nor are the Taiwanese people clamouring for full independence, which would clarify its status internationally.

This is not just because China refuses to rule out military action – although that is of course a sobering consideration.

While China presents a barrier to Taiwan’s diplomatic efforts, it is also the source of major economic opportunities.

There are 828 passenger flights and 68 cargo flights across the strait each week, Hua says.

Taiwanese political parties are defined by their position on cross-strait relations.

Opinion polls show more than 80% of people support the ambiguous status quo, under which the two governments each accept the other’s right to govern but refuse to recognise their sovereignty.

President Ma reflects this in his “three no’s” mantra: no unification, no independence and no use of force.

Taiwan’s inability to speak for itself at the UN shows the limitations of this pragmatic approach.

Government officials can hold side events at the climate talks, but only under the umbrella of non-governmental organisations. Their profile is no higher than hundreds of special interest groups that set out their stalls.

It is unclear what it would take to get Taiwan through the UN’s door. The democratic mandate of 23 million people alone has not been enough.

It took a major epidemic – SARS – to convince the World Health Assembly it was worth letting in Taiwan as an official observer.

A leaflet setting out Taiwan’s case for taking part in the UN climate process reads in places like a job application.

“We are confident we will be a very positive factor in any UN organization we are accepted to join,” it states.

The country highlights its motivation for addressing climate change and what it can contribute to global efforts.

Typhoon Morakot, which killed more than 700 Taiwanese people in 2009, showed the island’s vulnerability to weather extremes that are expected to worsen as temperatures rise.

Taiwan set an emissions reduction goal years before its neighbour and to much less hype: it aims to cut greenhouse gas emissions back to 2000 levels by 2025.

It has already made progress towards that goal, particularly through energy efficiency. As an export-led economy, it is keen to promote its low carbon products and services around the world.

Eugene Chien, chairman of the Taiwan Institute for Sustainable Energy and a former minister, says his country could teach its neighbour a thing or two.

“It is very important for China, because in this [sustainable development] they are far behind Taiwan. Although they are a big economy, they are in big trouble right now.”

Giving Taiwan observer status at the UN climate conference would also spur its government to further efforts on emissions, says Chien. “With peer pressure from other countries, this country can do more.”

Entry to the UN is not based on effort or commitment – if it were, there are several countries who could reasonably be barred from the climate talks.

Taiwan’s case ultimately depends on how much support it can drum up from the international community.

Despite a lack of formal recognition, Taiwan enjoys strong trading links on which it could build. More than 140 countries let Taiwanese passport holders in without requiring them to get a visa in advance.

While Beijing’s general attitude towards Taiwan is well documented, it is not apparent how far it would go to block this particular bid for greater influence. External pressure could make a difference.

Chien suggests the two sides may be able to compromise, allowing Taiwan to participate under the name Chinese Taipei, as in the Olympics.

“Only then can we marshal the international community’s full resources to help ensure that we leave a better world to succeeding generations.”