Obama must deliver at climate fundraiser in Berlin 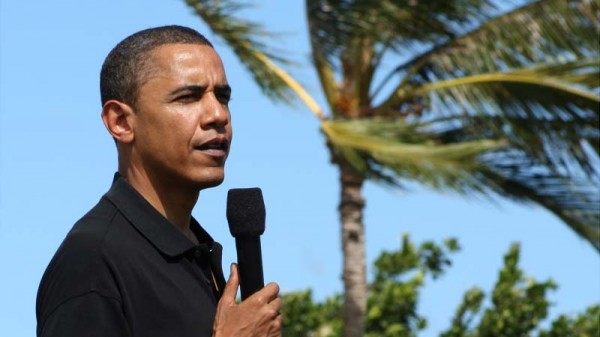 US president Barack Obama has a chance to show commitment to climate action
(Pic: Flickr/Justin Sloan)

By Pete Ogden and Gwynne Taraska

After this week’s historic climate change pact with China, the Obama administration will have another post-midterm election opportunity to demonstrate to the world its determination to continue leading in the fight against climate change.

The occasion will be a formal pledging conference in Berlin for the Green Climate Fund (GCF).

World leaders agreed to create the GCF in the 2009 Copenhagen Accord as a mechanism to combat global climate change by helping developing countries to achieve sustainable economic growth while enhancing their resilience to climate impacts.

While the GCF will help us to meet the goals of the UN Framework Convention on Climate Change, it is not run by the United Nations, but rather is an independent entity, with an independent secretariat and board (akin to the Global Environment Facility, launched in 1991 during the George HW Bush administration).

And after five years of careful design, it is now ready to be capitalised and start having its intended impact. But to do that, the United States must do its part and make a robust pledge to the fund.

The GCF is prepared for an initial capitalisation of $10 billion or more, and in fact has already received substantial pledges.Germany and France led with commitments of $1 billion each.

Sweden, which previously pledged $42 million, committed an additional $550 million.Major emerging economies, such as Korea, Indonesia, and Mexico, have come forward with smaller but still meaningful contributions.

Though total pledges currently approach $3 billion, more is needed to get this fund off of the ground.

Fortunately, with a significant commitment from the United States, as well as other donors such as the UK and Japan, the GCF could be adequately capitalised to begin its important mission right away.

The GCF aims to shift countries toward a path of economic growth that cleaner, more sustainable, and climate-resilient. Toward this end, it possesses, as no other fund has to date, the capacities to:

Mobilising private finance is necessary to achieve levels of investment that can shift development trajectories on a global scale.

Public funding alone is too scarce to accomplish the task, but it can and must be used strategically if we are to harness the power of the private sector, which has already demonstrated its appetite for financing climate solutions.

In 2012, for instance, some $224 billion private dollars were invested worldwide in mitigation measures.

Toward this goal, the GCF will contain, as a core part of its operations, a private sector facility that will aim to leverage private investment at scale through mechanisms such as risk mitigation.

As part of this, the facility has incorporated lessons learned from prior programs that the US has contributed to for years, including the Global Environment Facility (GEF) and Clean Technology Fund (CTF), which have had some success mobilizing private sector investment in climate-informed development.

The GCF was constructed and is governed jointly by developed and developing countries, which will maximise its ability to attract meaningful financial backing from a wider circle of donors than we have seen in the past (eg with the Clean Investment Funds).

Korea, for example, which hosts the fund, came forward with a pledge of up to $100 million in September, while Mexico has announced a pledge of $10 million.

Indonesia previously announced a smaller but symbolic pledge of $250,000 and indicated that it is prepared to increase support for the fund in the future.

Peru, which will host the next round of UN climate negotiations in December, may soon announce a significant contribution, and Colombia has indicated that it may contribute as well.

China and major economies could also find this fund to be an attractive vehicle for climate finance going forward.

For example, 84% of global public climate finance was invested in mitigation measures in 2012.

But with the increased prevalence and severity of climate events, projects that improve flood protection, establish early warning systems for extreme weather events, and otherwise enhances a country’s resilience are becoming as necessary as projects that lower greenhouse gas emissions.

The GCF is specifically designed to address this new reality. Its stated goal is to support adaptation and mitigation evenly over time.

Moreover, the fund will direct at least half of its adaptation support to countries that are at particular risk of being overwhelmed by climate impacts, such as in Africa or small islands in the South Pacific.

It also has included the vulnerability of the recipient country among its criteria for assessing proposed projects and has dedicated at least half of its “readiness” resources for the poorest countries, so they are prepared to work with the fund and begin driving their own climate-informed development.

Climate finance played a critical role in securing the Copenhagen Accord in 2009, and it is important that countries make progress on fulfilling their outstanding finance commitments in order to ensure their credibility as they begin to forge a successor to that agreement next year.

At the same time, providing such finance will encourage countries to be more ambitious in setting their own domestic greenhouse gas emissions reduction goals.

But to capture this opportunity, the US must make a robust pledge to the GCF and use it as a tool to move us closer toward the agreed goal of mobilizing $100 billion annually of climate finance from public and private sources by 2020.

But the GCF and the $100 billion goal must not be erroneously conflated.

The GCF was not designed to be the sole channel for delivery of all climate finance, and it is not intended to mobilize the full $100 billion annually.

Rather, the GCF aims to be an important channel for multilateral climate finance that also enhances the effectiveness of co-existing funds and bilateral channels (including the US Overseas Private Investment Cooperation and the US EXIM Bank) as they collectively seek to mobilize the necessary public and private resources.

The GCF is specifically designed as a new instrument to enhance the overall efficiency and impact of the existing ecosystem of bilateral and multilateral climate financing channels, which the United States has been a leader in—and funder of—for decades.

For example, the GCF would build on the success of the sunsetting Clean Investment Funds (CIF), which was launched during the George W Bush administration.

At the time, US treasury secretary Henry Paulson – along with the finance ministers of Japan and the UK – trumpeted the fund, calling it “an important step towards meeting the challenge of creating an environmentally sustainable path to prosperity”.

President Bush pledged $2 billion to the CIF – about a quarter of the total fund. And this investment is paying off.

For example, CIF investments in concentrated solar power (CSP) could help increase capacity of CSP by over 40% worldwide.

In addition, the majority of its clean energy investments are expected to result in a two-fold increase, or more, in national levels of renewable energy capacity.

The GCF has been designed to carry successes like these forward. Donors will not be expected to make new pledges to both funds, as the CIF was intended to sunset when its successor, the GCF, comes into being.

In addition, the United States has consistently funded the Global Environment Facility (GEF) since it was established in 1991 during the George HW Bush administration.

Over the six renewal periods of the GEF, the US contribution has accounted for about 18 percent of the total, and its contribution for the current period alone totals $546 million.

The GEF, too, has had many important successes.

It has disbursed $13.5 billion in grants and mobilized many times that in co-financing since its inception, which has yielded a decrease in carbon emissions of an estimated 2.3 billion tonnes and played a critical role in enabling the phase-out of ozone depleting substances in Central Asia and Eastern Europe.

The global need for increased public and private climate finance is increasingly acute, both for building cleaner, more efficient, and more sustainable economies and for coping with the increasingly severe impacts of climate change.

While the Green Climate Fund is not a silver bullet, it can provide a potent new tool in our arsenal at a time when we most need it.