Windmills, snails and science tales: Paterson comes out of his shell

Former UK environment secretary Owen Paterson kicks off a debate on climate policy, but not the one the public want 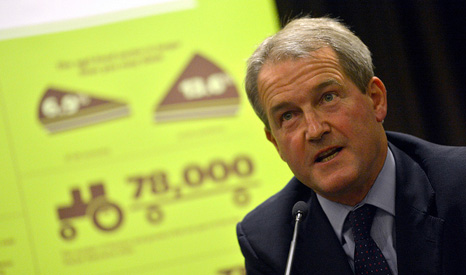 It was the speech to start the debate on climate change, small nuclear reactors and a little-known snail.

Owen Paterson, the UK’s former environment secretary, promised to expose the rot at the heart of Government energy policy and set out a new “common sense” approach to tackling climate change.

The speech was trailed by the Sunday newspapers and generated the most coverage of climate change since the issue was sunk by the financial crisis.

The event was door-stepped by a photographer from DeSmogBlog, an activist website set up to expose the individuals bankrolling climate change sceptics.

Hardcore sceptics themselves handed out leaflets, looking very far from anyone being funded by a millionaire.

Who was present? The usual suspects. Mostly white men of a certain age and more than a dozen journalists.

Paterson began by thanking his brother-in-law Lord Ridley, John Constable of the Renewable Energy Foundation and Lord Lawson of The Global Warming Policy Foundation, for helping to write the speech.

The big idea, leapt on by the media, is to scrap the 2008 Climate Change Act, which commits the UK to cutting carbon emissions by 80% by 2050.

Paterson claims the target as it stands encourages the UK to waste money on renewable energy that will not work and could result in even more emissions as we will be forced into a last minute dash for coal to keep the lights on.

Instead he wants the UK to be guided by the free market and the best technology available.

Despite the grand posters celebrating wind turbines that line The Institute of Mechanical Engineers lecture hall in central London, the first target was the dreaded windmills.

His party, the Conservatives, has promised to cap the number being built at the current target, which is 13GW. But he admitted that 15.25GW is in the planning system – so will decisions be reversed?

He said the UK is the only country “foolish enough” to be building so much offshore wind. He didn’t mention the UK has a rather large coastline relative to its landmass.

And he admitted he supported the building of the technology when secretary of state for Northern Ireland.

The first is shale gas “fracked” from the ground, which could “supply all our gas needs for decades”.

A member of the audience pointed out this industry is in its infancy and the Government’s own advisers warn it is “not a game changer”.

The second is combined heat and power, which would see smaller power stations built near our homes, run on gas or even rubbish.

Not only does this provide electricity but the waste heat generated is used to heat our homes.

It is already popular in Scandinavia and becoming more so here, but as Paterson admitted it will require massive investment to build these new power stations and link them to our homes.

But again, it seems some time off. The Department of Energy and Climate Change recently told a committee of MPs it could take five to seven years to get a trial project up and running.

Lastly, like many concerned about bringing down carbon emissions, Paterson is passionate about demand management.

He claimed that updating the grid so that fridges and other appliances are turned off at peak times could save as much energy as the output of seven major nuclear power plants.

Few would argue none of these ideas are worth looking into.

As promised, Paterson had sparked a refreshing debate, as it happens just a week before European leaders will sign off the region’s climate and energy plans up to 2030.

And he knocked on the head any suggestion he was joining the climate sceptic and anti-Brussels party UKIP, promising to work with fellow Conservatives to encourage a new ideas.

Then he went and ruined it all by questioning the science, which has been heavily covered over the past 12 months in the form of three hefty UN-backed studies.

Asked by a member of the audience whether he thought carbon dioxide was harmless he stuck to his guns and insisted the greenhouse effect does indeed cause warming.

But despite admitting the danger and uncertainty of climate change, he then said the recent hiatus in global warming was an “opportunity” to rethink our energy policy.

He didn’t mention if he believed the warnings from scientists over possible global climate impacts were now less concerning.

In an unusual reference that appeared to be more about questioning science itself than any relevance to the speech, he starting talking about the Aldabra banded snail.

This was declared extinct in 2007 due to climate change but recently reappeared – or rather a handful of the still incredibly rare creatures were found.

In a rather easy target – and to much applause – he also criticised Hollywood actors for telling Africa’s poor they should not have fossil fuels when so many would benefit from electricity.

This may have been a reference to Leonardo De Caprio’s recent speech at the start of a UN climate summit in New York, although I don’t recall him mentioning Africa.

However, the biggest applause were the emotional parts of the speech that talked about the “bullying” of anyone who dares to question the science of climate change.

The audience clearly felt they had been ignored and Paterson is right when he said the public is ready for a debate.

But is it this debate?

Polling suggests people are convinced of the science and the urgency of action all over the world. As one of 66 countries with climate laws, the UK is not alone.

Many would be happy to discuss the merits of CHP or small nuclear reactors as part of this and it was only surprising more experts from the field were not invited to the lecture.

It’s nice to see climate change “sceptics” come out of their shell at last and join the debate, but they are way, way behind everyone else.

And maybe, one day, we’ll find out what the hell happened to that snail.