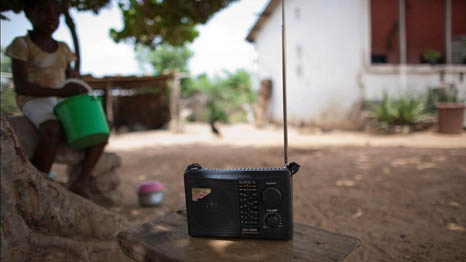 By Sophie Yeo in Marrakech

It was the country’s deadliest tropical storm on record, but while the Filipino catastrophe made front page news and prompted an international relief effort, the Somalian cyclone was barely reported.

It is not just Somalia. Africa is the silent continent when it comes to climate change, yet also the most vulnerable, due to its poverty and agriculture-dependent economy.

Across the region, stories that provoke rage when they occur in the western world pass without comment when they take place in Africa, adds Babs.

“We have the issue of oil spillage in my country of Nigeria. Shell is spilling every day. They flare gas every minute,” he says.

“When these issues happen in Europe and America, it’s presented in a very drastic and combative way that makes these organisations to be responsive and pay penalties. But in Africa, the same media—CNN particularly, BBC, AFP, AP—do not even report it.” 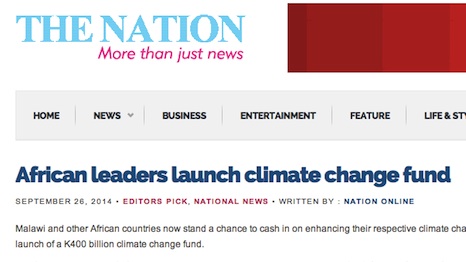 The story of Africa—or the lack of one—across the western world is manifestly unjust but not a surprise. Nor is the failure restricted to climate reporting; the disparity between the coverage of the few US victims of Ebola and the 3,400 Africans who have died of it is enough to make any western journalist feel uncomfortable.

But African writers have also struggled to maintain control over their own climate tale, albeit for different reasons.

“We want an African narrative of climate change. We look at journalists as stakeholders,” said Mithika Mwenda, the head of the civil society group Pan African Climate Justice Alliance.

At a climate change workshop for media in Marrakech yesterday, journalists pointed to the lack of capacity and access to training as the main hindrance to environmental reporting.

“Not many journalists have undergone climate or science reporting, so it’s based on personal interest. You find sometimes you don’t go in depth or digging deep into the issues because even the journalist doesn’t understand the issues he or she is talking about,” said Sellina Sheena Nkowani, a journalist at The Nation in Malawi.

It is not helped by the hugely complicated and quickly evolving subject matter, which can make it difficult for newcomers to catch on—and almost impossible garner any response beyond a yawn from editors, said Isaiah Esipisu from the Pan African Media Alliance for Climate Change.

“It becomes more complicated by the day,” he said, recalling how his easy 1999 job of reporting ministers’ speeches has descended into a minefield of acronyms and jargon.

Africa has another unique difficulty in carving out its own story: the thousands of languages spoken across its 54 countries.

This puts much of the African population beyond the reach of its largely French and English language media.

“There is a large number of people in Africa that are not even aware of what climate change is all about. These people are not literate. They speak African languages—Hausa, Swahili, Arabic—so how to reach these people?” asks Babs.

While working for Radio France International in 2000, he launched a service for Africa’s 38 million Hausa speakers in 2000. But when he came to launching a climate specific programme ten years later, he found he had to create a new word for climate change.

“It was not in their vocabulary,” he recalls.

The media is also failing to engage with disabled people, he says, which puts the deaf and the blind at particular risk whenever an extreme weather event strikes.

The role of the African media as an alert service for climate impacts is a practical reason why journalists need to get a handle over the subject—and the sooner the better, with the UN’s climate panel predicting climate change will reduce agricultural productivity, increase water stress and damage ecosystems in this century.

In Cameroon, for instance, farmers are already using their radio to find out when to plant, as climate change means they can not longer trust natural weather patterns.

But there is another reason why African journalists should learn to tell the story of climate change: it is the story of Africa’s “coming of age”—and a way to make the big polluters sit up and listen.

“What is the other storyline? It’s not only ‘we are vulnerable’. We have to take the narrative back to us,” said Fatima Denton, coordinator African Climate Policy Centre, part of the UN Economic Commission for Africa.

Africa has incredible potential when it comes to climate change—and if the media starts to tell this story, then Africa will cease to be framed as the constant victim, she says. “We have to really begin identifying the mitigation opportunities.”

This means taking the conversation beyond reparations, but asserting Africa’s identity as both a continent which is finding its own solutions, at the same time as demanding its dues from historical polluters—including China, India and Brazil, as well as the US and EU.

Babs adds: “Through our media reportage, through our analysis, we must be able to attack intellectually as a way of attracting attention to the issues we face here.”