What did Ban Ki-moon’s summit deliver on climate finance?

A new consensus on the role of public and private funding for climate change emerged this week, but more cash is needed 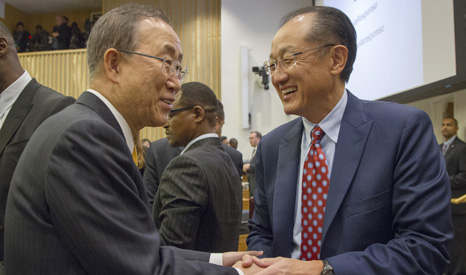 Finance as a means of implementation has long been a point on contention within the climate negotiations.

The historic announcement in 2009 that developed countries would work jointly to mobilise $100bn of finance/annum by 2020 to support developing countries with climate actions marked a turning point.

Yet much of the attention since then has focused more on how to raise the US $100bn than how to ensure it is used for greatest transformational impact.

Noting that around US$1 trillion per year is required to assist developing countries with low carbon and resilient investments, UN climate chief Christiana Figueres has summarised the challenge as “basically the US$100bn promised by developed countries must be the tail that wags the dog.”

Mobilising the trillions of dollars investment required underscores the need for climate finance to be used most strategically to catalyse all flows of finance – public, private, domestic and international – into the investments required for a low carbon and resilient growth path globally.

The challenge can be summarised into five categories:

Tuesday’s announcements at the UN Secretary General’s Climate Summit can be assessed against these five main objectives.

Ahead of the Summit, Government pledges to the Green Climate Fund (GCF) were held up as one key measure of success on climate finance.

A handful of Governments from both developed and developing countries did step up with pledges for the Fund.

The largest of these came from President Hollande committing France to providing $1billion over 4 years. South Korea – host to the GCF in Songdo announced $100m coming on top of a previous commitment of US$50m.

Also of significance was Mexico’s announcement of US$10m contribution. Oxfam provides a useful assessment of progress towards a successful GCF pledging goal. 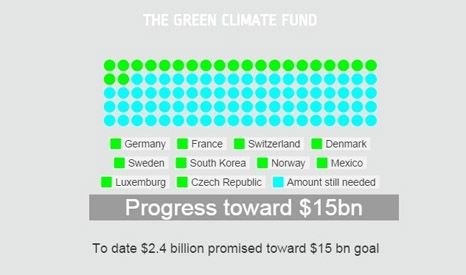 So whilst it is certainly disappointing not to have heard more concrete commitments from countries such as Italy, Japan the UK and the US, it is not particularly surprising.

There remain several significant outstanding details on the governance of the GCF and its ability to start financing transformational investments next year.

In particular the currently vague level of understanding on the role of the GCF’s Private Sector Facility (PSF) calls into question the fund’s potential for mobilising significant flows of private sector finance for low emissions and resilient development.

There are concerns too over the fund’s ability to support the growth of the local private sector and domestic green markets within developing countries.

“The Green Climate Fund reduces risk, which in turn will open up new markets for transition to low emission economies,” she said.

Several of the upcoming decisions, particularly those that relate to the PSF and the Fund’s investment and risk-management frameworks, will determine whether these aspirations can be met from the outset of its operations.

When the board meets in Barbados next month it must focus on those crucial issues that remove all obstacles to a successful pledging session in Oslo, November.

Some anticipated that there would be significant new initiatives announced by major development finance institutions.

Ahead of the Summit, the leading Multilateral Development Banks (MDBs) had released their third annual report on their flows of climate finance.

The joint report, which is based on a common climate finance tracking methodology, creates transparency and coherency between their approaches towards climate finance.

These banks also stated an intention to do more to help developing countries tackle climate change and to explore the role of new instruments, whilst stopping short of any new targets.

The International Development Finance Club, a network of 22 like-minded national and sub-regional development banks, confirmed that they are on track to meet their commitment for increasing new climate related activities to over US$100bn per year by 2015.

The German government announced that it would stop funding new coal-fired plants as part of its climate cooperation with developing countries and would only finance the modernisation of existing plants “to a limited extent and in accordance with clearly defined criteria.”

On the face of it this is a welcome step, yet whether or not this commitment extends to all of Germany’s international finance activities remains to be seen.

That over 1000 businesses called for putting a price on carbon is testimony to the frustration that many businesses have experienced since the decline of the carbon markets.

This decline is of course due to the lack of market demand as a result of insufficient levels of commitment to emissions reductions.

Business believe it is inevitable that carbon will be capped creating a price for carbon.

So this call for a price on carbon is in essence a call for Governments to commit to sufficiently ambitious and binding levels of emissions reductions so that business can factor such signals into their future investment models.

This message is at the heart of a statement made by 347 investors representing over US$24 trillion of assets:

“We call on governments to develop an ambitious global agreement on climate change by the end of 2015. This would give investors the confidence to support and accelerate the investments in low carbon technologies, in energy efficiency and in climate change adaptation.”

Two insurance industry associations that together cover the majority of the global insurance sector signalled a growing concern for understanding and managing climate risk across their investment portfolios.

Noting that insurance is the “most climate-risk aware sector in finance” the CEO of the International Cooperative and Mutual Insurance Federation announced that they would create and monitor a Climate Risk Investment Framework which would be accountable to the new UN Hyogo Framework, the adoption of which will focus investors on climate risk and the importance for resilience.

This significant development comes alongside the Carbon Disclosure Standards Board and the commitment by business and investors to disclose climate related risks as part of their fiduciary responsibility.

A group of institutional investors — including the Fourth Swedish National Pension Fund (AP4), and Europe’s largest asset manager Amundi – collectively announced that they will reduce the carbon footprint of their portfolios by US$100 billion globally by December 2015.

This Portfolio Decarbonisation Coalition (PDC) represents a broad and mixed group of financial institutions that are not only concerned over the risks climate change presents, but also the financial risks that high carbon assets present to their investment portfolios.

This divestment away from high carbon assets comes alongside a commitment to measure and disclose the carbon footprint of at least $500billon worth of assets.

That the chairman of the China International Capital Corporation Jin Liqun said it was committed to promote the investment decarbonization and the use of low carbon indexes, particularly in Asia and in China.

That is testimony of the potentially far-reaching impact of this announcement.

The two insurance associations said they would double their current level of climate related investments to $84 billion by the end of 2015, with the further intention for a 10 fold increase to $420 billion by 2020.

A group of leading commercial banks also announced that they would issue $30 billion of green bonds by 2015, and three major pension funds from North America and Europe announced the intention to accelerate low-carbon investments across asset classes by more than $31 billion by 2020.

As a further step of its proclaimed leadership role on climate, the Bank of America launched a Catalytic Finance Initiative, designed to stimulate at least $10 billion of new clean energy investments.

This follows on from the Bank’s recent goal for $50 billion worth of environmental related business within 10 years from early 2013.

The initiative aims to accelerate the use of innovative financing structures that reduce investment risks required to attract a broad range of institutional investors.

As part of this commitment the Bank will make available $1 billion in capital to be used for investments that employ a range of de-risking tools.

The initiative, which will partner with development finance institutions, insurance companies, foundations and institutional investors, aims to attract at least $10 billion of incremental finance for investments in renewable energy, energy efficiency and energy access.

Where are the projects?

The various announcements on Tuesday imply a significant increase of the pool of capital available for green investments.

Inevitably this will cast attention on the pipelines of projects that are able to attract such finance.

As institutional investors are relatively risk-averse, efforts will now need to focus on ensuring that projects coming forward match the risk-reward profile required by these long-term investors.

The Bank of America initiative aims to tackle this challenge. The Private Sector Facility of the Green Climate Fund can also provide the necessary risk sharing instruments.

However policy uncertainty, which is often cited by institutional investors as a key risk also requires actions by governments to create the policy and regulatory frameworks for which they have primary responsibility for.

Additionally, the heightened attention on green bonds also implies the need to accelerate an agreement on globally recognised standards of what constitutes a “green” bond.

Building on the Green Bond Principles to bring together the diverse range stakeholders to develop such principles must now be a priority.

In the absence of a credible framework to assess the greenness of the underlying assets there is a risk that the announcements on Tuesday were little more than greenwash.

Overall, Tuesday’s Summit signals the emergence of a new consensus on climate finance which recognises the crucial roles of both public and private finance.

That all public policy, regulatory and pricing signals must be aligned to provide investors with certainty as to where to direct their resources, and that dedicated sources of climate finance need to help risk-manage the transition, is starkly clear.

Between now and the Paris 2015 agreement, Governments must respond with the individual and collective actions that are required of them.

Next month’s meeting of the GCF Board – and considerations of the catalytic role of the Private Sector Facility in particular – provides the first opportunity to do so.

Amal-Lee Amin is associate director E3G and a member of the private sector advisory group for the Green Climate Fund. Follow her on twitter @AmaleeAmin