For small islands states, the renewables revolution is already here

Island states are may be small, but they’re powerful when it comes to renewables, write three foreign ministers 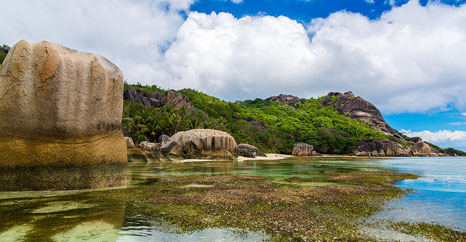 While many have traditionally associated us island states as inevitable victims of the warming planet, the opposite is true.

We are leading the rush to the greatest global energy transformation the world has seen since the industrial revolution.

Lying out in the middle of our vast oceans, this might not seem a natural choice for our islands.  But after years of subjecting our fragile economies and communities to the high cost of imported fossil fuels, we are moving to a new energy paradigm.

In 2008, a global oil price spike forced the Marshall Islands Government to declare a national economic emergency, with the nation no longer able to pay for the imported diesel used to generate up to 90% of the country’s power.

After the energy policy review that followed, the Marshall Islands chose a different path.  More than 95% of its vast outer island communities – spread out over a million square kilometers of the Pacific Ocean – now power their livelihoods by the energy of the sun.

Through initiatives like the Majuro Declaration for Climate Leadership and the CARICOM Regional Energy Policy, we have set ourselves some of the world’s most ambitious targets for renewable energy and energy efficiency, throwing down the gauntlet for the big emitters to follow our lead.

For example, the Cook Islands, Niue, Tuvalu, Vanuatu, Aruba, Dominica, St Kitts and Nevis, Grenada, St Lucia, and the Maldives are all striving to be 100% renewable by 2020, and Tokelau has already made it happen.

Part of this, of course, is self-interest:  there is no group of countries anywhere in the world where the “win-win” for the economy and the environment is more profound than in our island nations.  When we switch to clean energy, it is not only good for the planet, but it is also good for our economies, our health and our energy security.

But there are also global interests at play.  While our emissions are miniscule, there is no reason our island nations cannot be the world’s powerhouses for the demonstration and uptake of renewable energy technologies, both tested and new.

For example, Ocean Thermal Energy Conversion, which is already being tested on offshore islands in the Pacific and Indian Oceans, as well as in the Caribbean, and has the potential to deliver gold-standard renewable energy to large coastal urban centers in more than 40 countries worldwide, including the US, Canada and Japan.

Thankfully, some of the world’s biggest economies have already seen the light.  Germany’s Energiewende has set Europe’s industrial powerhouse on track to reach an 80% renewable energy target by 2050, and at one point last May, 75% of the German grid was pulsing with clean green power.

Despite signs of progress, two-thirds of all greenhouse gas emissions around the world still come from the energy sector and we continue to lock in just as much high-emitting energy infrastructure as we do new renewables.

According to the IEA, for every $1 of delayed investment now, it will cost us $4.30 after 2020 to compensate for increased emissions if we are to keep global warming below 2C.

Thankfully the costs of many renewables, including wind and solar, have dropped significantly in recent years, making groundbreaking large-scale projects like the Port Victoria Wind Farm in the Seychelles possible, and in turn saving the country almost 10,000 barrels of oil a year.

As world leaders gathered in New York for the UN Secretary-General’s Climate Summit, the loud message from all of us was that the fossil fuel era is over and that the renewables revolution is here to stay.

Here in New York, our island leaders launched a new “SIDS Lighthouses Initiative” to register our renewable energy needs, and match them with new financial tools and sources of support that can turn our sustainable energy dreams into reality.  For our communities, our countries and our common purpose,  nothing could be more important.