By Ros Donald in New York

At 1030 on Sunday morning, there was a crackle in the air and a threat of rain as reporters swarmed around dignitaries, trapped in a press enclosure.

Behind them, a tide of 310,000 demonstrators stretched back from Columbus Circle along prime Central Park real estate along Central Park West from 59th Street to 86th Street.

The sounds of bugles, marching bands and drummers echoed off the coffee-brown glass walls of the Trump International Hotel and Tower.

The terrace of climate sceptic businessman Donald Trump’s great monument had been transformed into a meeting-place for marchers teaming up with friends before the main event.

Each wave of protesters had its own identity – the march was split into seven sections, from scientists to an interational cohort bringing elders together with students and parents.

At the forefront, those at most risk of the effects of climate change spoke eloquently of the risks they already face to their homes, health and livelihoods.

Holding a banner with her fellow Peruvians, Lorena El Carpio said the country was already experiencing water shortages and food security shocks. Yet, she says the government is not taking the problem seriously despite hosting the next UN climate talks this year:

“We want to invite people from all over the world to come to Lima on December 10 to mobilise together,” she told RTCC.

Following close behind with fellow Tibetans, Si Xu said action against climate change is important for Tibet and the whole of Asia.

“The big cities from Delhi to Shanghai to Calcutta are fed from the waters of Tibet so it’s very important to build climate resilience.” 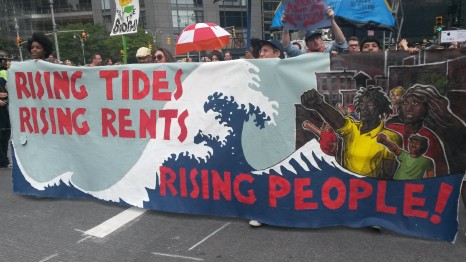 In addition to regional and country groups, international alliances had formed across issues.

Small Island States, at acute risk of sea level rise, and groups representing New York’s homeless, who are at severe risk from extreme weather and temperatures, found common cause with residents of New York’s coastal boroughs, which are still rebuilding after Hurricane Sandy.

We fought against the tide to find people to speak to – and weren’t the only ones going against the flow.

Weaving among the marchers were joggers surprised by the march, weaving their way through the crowd to continue their runs.

A hotel porter from the Ritz fought his trolley loaded with suitcases across the crowd to find a spot for his guests to get a taxi a few blocks away.

His shocked guests, laden with Luis Vuitton branded day packs and dressed in crisp white jeans, looked shocked as a wave of humanity crashed into their weekend break.

A woman from upstate New York, who said she was motivated to march by the threat to her local maple syrup industry, clapped along with Hare Krishnas sporting intricate facepaint as they sang.

Coming up to 1pm, marchers started checking their phones. Those who had signed up received a text message from the organisers at 12.58 to signal a minute’s silence.

Stretching up to the horizon, people held their hands aloft for a moment of quiet before a blast of noise – intended to sound the alarm for action on climate change – rippled downtown, a corridor of noise ricocheting off the buildings.

Science advocates were out in force: Susan Binder, a teacher from Long Island, spoke of what she sees as a cultural barrier that fails to place value on science in society.

She told us: “Somehow, we have devalued science in our society. Scientists are vocal [about the risks climate change poses], and the media and culture have to start to listen”.

Columbia University climate scientist Adam Sobel’s sign read simply: ‘RCP 2.6 now!’ – a reference to the lowest-emissions pathway the International Panel on Climate Change sets out for global development into the next century.

By 3pm, whole cohorts had yet to begin marching the route. The number of people who came today more was more than triple the organisers’ expectations, and over 300,000 people take up a lot of space.

But despite having stood for over four hours just waiting to begin, spirits were high – buoyed by music and the odd coffee snuck from Starbucks as marchers squared their principles with the lure of caffeine and a loo.

Timmons Roberts, a professor of environmental studies and sociology at Brown University, told us: “We’ve been waiting for years for a real climate march. This is the biggest in history – finally, and it’s in America. And that’s a big deal.”

One marcher, who had witnessed the great protests of the 1960s, from the civil rights movement to anti-nuclear demonstrations, said: “I’m moved by today – the feeling is comparable to when I was young.”

As we left thousands marched, danced and drummed their way into the centre of Manhattan, away from the the gaze of the Trump tower.

Perhaps today signals a returning of the climate movement’s purpose, its sense of confidence.

Many more than the 310,000 who walked the streets of New York hope that is the case.