To fight climate change, we in the UK are better together

COMMENT: An independent Scotland – or the rest of the UK it leaves behind – will not hold much sway at climate talks 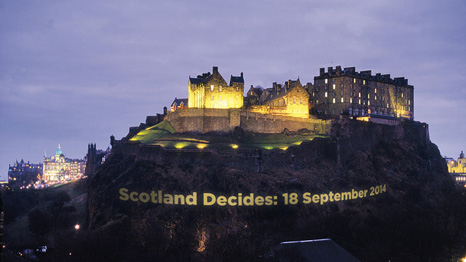 Scottish voters decide tomorrow whether to break away from the rest of the UK
(Pic: Flickr/Scottish Government)

I have put off writing about Scotland’s independence referendum. Despite being a former political correspondent on The Scotsman, I have only been living up here for a year or so and didn’t feel I had the right to tell people how to vote.

After five years as environment correspondent on the Daily Telegraph my area of knowledge is climate change. So it was with some interest I read the analysis by the Greenpeace Newsdesk of what a Yes or No vote might mean for the environment.

Like many people in Scotland who care about the environment, I have swithered about which way to vote. I back the stronger target of 100 per cent renewable energy by 2020 set by the Scottish Government. But they already have power over this, so would an independent government make any difference? The green tech industry is already nervous about the uncertainty of working in a new country. And both sides seem to be equally keen on oil…

I believe the right to a healthy environment is important but will putting it in a written constitution make it happen? Remember, it was SNP leader Alex Salmond who nodded through Donald Trump’s  golf course slap bang in the middle of a highly sensitive area for birds.

The Scottish Parliament already manages environmental stewardship on farms. Would farming really be more wildlife-friendly if Scotland rather than the UK negotiated the terms of subsidies from Europe? If we really are to sign up to “landscape scale” conservation shouldn’t it be cross border?

Then I thought ok, what do I know? As a journalist I have had the privilege to watch first hand the United Nations climate change negotiations since 2008. These annual talks are aiming for a global deal to stop global warming. Ok, they have not been a great success so far, but many would argue they are our best chance to stop temperature rise going too much beyond 2C by reversing the rise in carbon emissions – in other words, to paraphrase president Obama, to “save the world”.

One scene in particular stands out: Durban 2012. It was the early hours of the morning and the talks were at deadlock – as usual. India and other developing countries were refusing to sign up to an EU plan to force all countries to cut carbon emissions as part of any future treaty.

I don’t think many other people noticed, but I saw an inconspicuous man in spectacles also emerge from the huddle. The UK’s chief negotiator, an ordinary civil servant, was helping to persuade the Indians to accept a deal.

The new deal meant that for the first time every county in the world is committed to cutting carbon and put us on track for a binding deal, where parties will agree targets, in Paris 2015.

That night, the UK played a part in keeping climate change negotiations – that may “save the world” – on track. I don’t think we would have that power as Scotland or as England or even rUK – or rest of the UK as I think we shall be known. And with crunch UN talks in Paris next year when the world has to decide on a final deal on cutting emissions, these negotiations are more important than ever.

For that reason I am voting No, because I think the issues I most care about are better served at the moment when we work together.