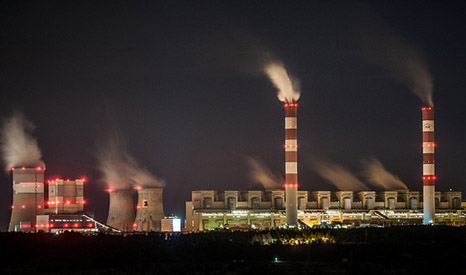 Bełchatów coal mine and its 4,450 MW power station in Poland (Pic: Kamil Porembiński/Flickr)

With his historic ruling to directly regulate dirty coal-fired power stations off the US power network, President Obama sent an unequivocal signal to the world that the era of unlimited carbon pollution indefinitely spewing from American power stations is over.

He also demonstrated that his government has a credible and thought through plan to deliver on its overall ambition for cutting the United States’ contribution to global emissions.

It’s time Europe did the same. As the carbon tracking NGO Sandbag has outlined in detail, we’re currently heading in the wrong direction.

Since 2010, coal use across the EU rose by 6%. According to data from BP, coal consumption was up by almost a quarter in the UK and by 13% in Germany.

According to projections from Bank of America, the economic conditions are still so favorable to coal burning that without government intervention “maximum coal burn” is expected to continue in Europe. This would be completely at odds with Europe’s stated aim of transitioning to a cleaner economy.

To maximise the chances of achieving an international climate agreement at the UN summit in Paris in December 2015, the EU will need more than simply a headline target for emissions reductions out to 2030.

It will need a credible plan in place to prevent carbon pollution from coal plant blatantly scuppering any chance of making good on this promise.

In theory the European Emissions Trading Scheme (ETS) is supposed to be centre piece of Europe’s strategy for cutting greenhouse gases, and dealing with emissions from coal.

Yet the data shows that since European heads of government agreed their clean energy policies in 2008, the bulk of emission reductions have come not from the ETS but instead from the deployment of renewable energy and improvements in energy efficiency, as well as the impact of the economic down turn.

Repeated attempts at meaningful reforms to the ETS have failed, and the carbon price remains languishing at a fraction of the level that energy companies have acknowledged it would need to be to drive switching away from coal-fired generation.

Whilst the European Commission have brought forward a proposal called the Market Stability Reserve (MSR) that might begin to fix the flaws in the ETS, European governments have not yet green-lighted the plan, which in any case would not start impacting the economics of coal-fired generation until the late 2020s.

This would be far too late to address Europe’s coal problem and ensure the new 2030 carbon target is not compromised.

As I have set out in a new report for IPPR this week, Europe’s governments should follow Obama’s lead and act to make unabated coal use illegal.

As well as bringing forward the passage of the Market Stability Reserve plan to 2016, and tightening ETS carbon budgets so that they reflect Europe’s ambitions for cutting emissions, they should move in parallel to develop Emissions Performance Standards (EPS) for power plant.

These would act as a backstop in the unfortunately probable event that reform to the Emissions Trading Scheme fail to be sufficient.

In the UK, the coalition did establish an EPS in their new energy law – but this should now be extended to cover existing coal plant.

The Labour Party already voted to enact such a measure when the energy bill was passing last year, and now the Liberal Democrats are pledging that their election manifesto will support the idea too.

With precedents for such an approach in the US and UK, British Ministers should now champion an EPS with their European counterparts to ensure that Europe’s climate plan isn’t crippled by coal.

Joss Garman is an associate fellow at the IPPR thinktank, focusing on international climate change and energy policy. Follow him @jossgarman