Could Donald Tusk use EU top job for anti-climate agenda?

Despite his pro-coal domestic agenda, Polish PM might not be a bad choice for European Council president 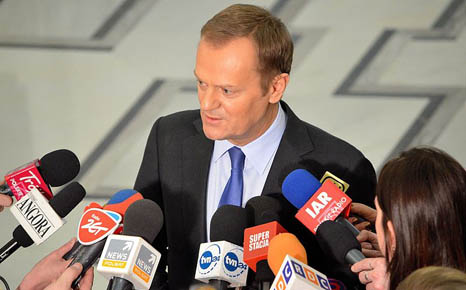 Polish prime minister Donald Tusk has emerged this week as the most likely successor to Herman van Rompuy as president of the European Council, the body which brings together the heads of government of the 28 EU member states.

Tusk is not in favour of action on climate change; he is a strong supporter of Poland’s coal industry and argues against ambitious climate targets. He even opposes decarbonisation ‘roadmaps’.

So his appointment would not be a step forward for European climate action. But nor would it be a significant step back.

The role of the president of the Council is not to lead the debate, but to chair meetings and try to secure agreement among 28 government leaders, each of whom has his or her own political agenda.

As my Centre for European Reform colleague Agata Gostyńska points out, van Rompuy has been successful because he does not have a strong personal agenda, or a big ego. So president Tusk would not be in a position to push a pro-coal policy line.

The Council agreed in late June a strategic agenda. This includes “a forward-looking climate policy” as one of the strategic priorities for the next five years.

To do this, “we want to build an Energy Union aiming at affordable, secure and sustainable energy”. And the EU will continue “to lead the fight against global warming ahead of the United Nations COP 2015 meeting in Paris and beyond, including by setting ambitious 2030 targets that are fully in line with the agreed EU objective for 2050.

These are just words – and the EU is not in fact leading the world in delivery of strong climate policies, just in the setting of targets. But the words do constrain what Tusk would be able to achieve if he tried to reverse or slow down EU climate action.

After Russia’s annexation of Crimea, Tusk called for a European energy union. He said that there should be a single EU buyer of Russian gas, in order to reduce Moscow’s leverage. Coal purchases, he said, should remain a matter for national governments.

This was clearly part of his pro-coal, anti-climate action agenda. However, coal is more easily tradeable than gas is, because it does not require pipelines or LNG terminals. (Poland actually imports some coal from Russia, as do other countries which led demands to reduce Russian gas imports – notably the UK.)

Creating a single EU buyer of Russian gas would be a sensible development. So the Tusk proposal was not all bad.

And Tusk is not the only person calling for an energy union. Former Commission president Jacques Delors is also calling for closer energy co-operation, though he calls it a community rather than a union. The fact that the European Council used the Tusk phrase in its Strategic Agenda does not mean that it signed up to all his ideas.

It is over a decade since Poland and other Eastern European countries joined the EU. So there would be political advantages in giving a senior position to an eastern European.

There would also be practical climate policy advantages in making a Pole president of the European Council. Climate policy – internationally, Europe-wide and nationally – must be based on justice.

Western Europe became rich by burning coal. Poland gets around 90% of its electricity and heat from coal. It has major domestic reserves.

If we in Western Europe want the Poles to leave the coal in the ground, or to burn it only in expensive carbon capture and storage plants, we will have to contribute to the cost. A Polish president of the Council could be helpful in driving home this simple message.