Finally, the US gets serious on climate change 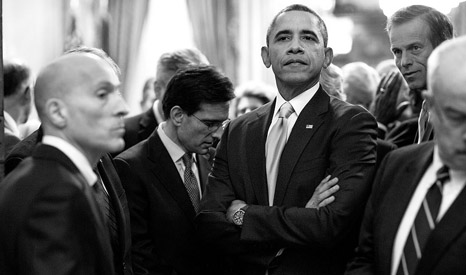 President Obama’s declaration today on limiting emissions of carbon dioxide by a third from coal fired power plants in the US is a major step in the right direction and marks the tipping point in US engagement in tackling the global problem of climate change.

It is not that the amount of emission reductions thus achieved are particularly large compared to the scale of the problem, but rather that President Obama has finally decided to put his political capital behind this issue, which is arguably the most important and far reaching one that his generation of leaders will have to face.

The point that he seems to have finally understood is that as the current leader of the richest and most powerful country in the world and (now) its second biggest emitter of greenhouse gases, he bears a singular responsibility to leave the world a better place for his children and future grand children.

Tackling climate change is not a matter of protecting the interests of the US (or any other country) against other countries (which is what normally happens in global diplomacy) but rather a challenge to this generation of global leaders who will be answerable to their children and grand children rather than to their current (adult) electorates.

Most of the people, and some leaders, in the rest of the world had realized this already and are beginning to take significant actions but the US has been a major laggard, because of its peculiar anti-science politics.

For example the House of Representatives recently held a hearing on the International Panel on Climate Change (IPCC) and declared it to be non-scientific.

Even the words “climate change” seems to be confusing for the US public who prefer the words “global warming”.

In any case whatever the words they choose to describe the problem, it seems that President Obama, his advisers in the White House and Federal Government, have decided that it is indeed their duty to take on the denialist factions in Congress and media on this vitally important issue.

One of the important aspects of how the issue is explained, and whose narrative counts, is the issue of cost.

The climate change deniers (or those who oppose actions even if they don’t deny climate change) focus on the “costs of action” and they exaggerate those costs to frighten leaders into inaction.

However, what is becoming clearer with time, is that the “cost of inaction” is many times higher than the costs of action.

However, the crucial difference in the two costs is that the costs of action will hurt the vested interests and fossil fuel industries, whereas the costs of inaction is already being borne by the poorest and most vulnerable countries and communities and that even the rich countries are now having to face the costs of climate related phenomena like hurricane Sandy in the north east and the drought in California in the US.

These costs are borne by the people in general (and poorer people in particular) who are not able to pay for expensive lobbyists to influence their leaders to take appropriate actions.

However, the real costs of inaction are now becoming clear to even the most willfully blind politicians around the world and therefore the need to take much greater action to prevent catastrophic climate change impacts as projected with a 4 degree Celsius rise in temperatures over coming decades, which where we are headed, to bring those temperatures down to well below 2 degrees (which is the stated aim of all countries).

The upcoming Climate Change Summit called by the Secretary General of the United Nations, Ban Ki Moon on 23rd September in New York will be the appropriate occasion for President Obama of the US, President Xi of China and the newly elected Prime Minster Modi of India, as well as other presidents and prime ministers to come and make significant pledges for actions which are commensurate with the scale of the problem.

This is their opportunity to look their children and grand children in the face and say that that when they were called on they did the right thing for both future generations as well as for the entire planet and not just for their own countries.

It is time for world leaders to show global leadership rather than just national leadership.