Why is the US wind industry in the doldrums? 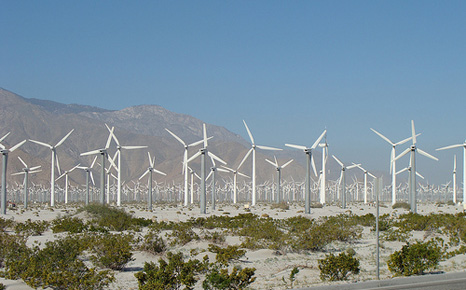 The US wind industry remains in a slump and could even fare worse than a poor 2013, federal energy data show, as uncertainty weighs over the extension of a key subsidy.

The latest data contradict industry predictions of a massive US rebound this year from a poor 2013.

The US industry is on track for its lowest growth in a decade, after capacity additions in the first four months of the year halved compared with the same period last year.

The industry is pinning its hopes on a reported surge in the number of new projects under construction, but developers may be in no rush to complete the projects which have qualified for a now expired tax credit.

US wind energy growth has historically followed a boom-bust cycle, in line with the repeated extension and expiry of the federal tax credit.

The shale gas revolution has cut US power prices and market incentives for wind power, leaving the industry more dependent than ever on the subsidy.

The fact that growth has slowed again compared with the start of last year suggests that 2014 will be another poor year.

The United States cumulatively added some 427 megawatts of new wind power capacity from January to April this year, show the latest data from the Federal Energy Regulatory Commission.

The FERC data record when new electricity generating installations are grid-connected and come on line.

Some caveats should be considered.

First, there are some collection differences, where FERC data at the beginning of 2013 appear to lag those of the wind energy industry, and may have included a surge in installations at the end of 2012.

If so,  that would make the start of 2014 appear worse in comparison with the same period last year.

Second, the energy regulator has in the past revised its figures over time as it fine tunes its data, but by successively smaller amounts in the past three years.

Third, the wind energy industry has in the past managed to add a lot of capacity in the second half of the year, depending on the urgency to meet a subsidy expiry deadline, as at the end of 2012.

But there should be no such mad rush in the second half of this year, even if the tax credit is renewed.

The US wind power industry is supported by a federal Production Tax Credit (PTC) which provides a tax credit for each kilowatt hour (kWh) of electricity produced by a wind farm during the first 10 years of operation.

Developers in 2012 rushed to meet a deadline to complete their projects by Dec. 31 2012, to qualify for the credit.

The tax credit was subsequently extended, but only until the end of 2013; and the deadline this time was to start rather than complete construction.

The credit has now expired for new projects, but an extension is up for consideration by the Senate, having been approved by the Senate Finance Committee in April alongside other tax provisions.

The proposed extension, under the draft bill titled “Expiring Provisions Improvement Reform and Efficiency (EXPIRE) Act of 2014”, would allow tax credits for projects which started construction by the end of 2015.

That has resulted in a boom-bust cycle, as illustrated by the American Wind Energy Association (AWEA).

Their latest data make grim reading for the industry, with a slump in capacity additions through April even from last year’s low levels.

The data seem to confound industry expectations for a rebound in growth this year.

The AWEA reported last month a surge in new projects under construction.

“There is currently more wind power capacity under construction than at any time in the history of the U.S. wind industry. There are more than 13,000 MW of utility-scale wind development under construction across 95+ projects in 21 states,” it said, in its “U.S. Wind Industry First Quarter 2014 Market Report”.

However, that surge in new construction was no doubt partly to meet the tax credit deadline at the end of 2013.

Now that they have secured the credit, developers may have no rush to complete, with a question mark over when they will come on line. The latest FERC data suggest that may not be before late 2014 or 2015.

Meanwhile the uncertainty over the extension of the credit does nothing to support a pipeline of new projects.