How long can the fracking revolution last? 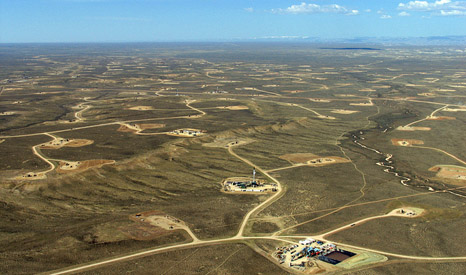 The fracking industry is the new star on the US energy scene, credited by its backers with bringing down domestic fuel prices and revitalising the US economy.

But amid the talk of an energy revolution, there are questions about just how long the fracking boom can last.

There’s no doubt that fracking – the complex process through which oil and gas is extracted from deposits of shale rock deep underground – has revolutionised the US energy sector.

Fracking, says the oil and gas industry, will bring an end to the country’s dependence on fuel imports: self-sufficiency is the stated goal.

Governments in other countries, including the UK, are jealously watching developments in the US: many are seeking to promote their own shale energy boom.

Though the oil and gas produced from fracking are fossil fuels, some green groups see the industry as potentially helpful in fighting climate change: the idea is that these fuels – particularly supposedly cleaner fracked gas – will act as transition energies till renewables like solar and wind power are properly developed.

When that happens, the theory goes, we can all embrace a fossil fuel-free future.

Earlier this month the Intergovernmental Panel on Climate Change (IPCC) tentatively endorsed the use of shale gas, despite concerns that the fracking process releases considerable quantities of methane – a potent greenhouse gas – into the atmosphere.

There are other questions about the future of fracking. The process uses vast amounts of water: the Ground Water Protection Council, made up of various US state water regulatory agencies, estimates that each fracking operation requires between two and four million gallons of water.

With parts of the US like a pincushion, punctured by thousands of wells, that’s an awful lot of water.

The US Government’s Environmental Protection Agency (EPA) says the more than 35,000 oil and gas wells engaged in fracking use up to 140 billion gallons of water each year, roughly equivalent, it says, to the annual consumption of a city of five million. A cocktail of chemicals is added to water in the fracking process, and most water used is not recycled.

Moreover, many regions where fracking is most intensive are also areas prone to serious water shortages.

A 2013 report by the Western Organization of Resource Councils (WORC), a network of community groups across four states in the US west including North Dakota, one of the main fracking areas, said water used in the extraction process threatened supplies for agriculture and for rural communities.

“There is mounting evidence that the current level of water use for oil and gas production simply cannot be sustained and that projected increases in use may lead to a crisis”, says the WORC. “Something has to give.”

Then there are questions about the whole financial basis of fracking, with critics warning that the industry is a bubble that will soon burst – “the new subprime” threatening not only the energy sector but also the US financial system.

Billions of dollars have been sunk into the fracking industry. Fracking is a far more expensive process than most conventional oil and gas exploration, involving both vertical and horizontal drilling techniques.

At first shale wells produce large volumes of oil and gas but production tends to taper off fast. New wells then have to be sunk in order to maintain production.

Typically, shale companies operate on substantial levels of debt, continually faced with having to service their vast borrowings.

While up-to-date, detailed information on the overall state of the fracking industry is hard to come by, some analysts say production is already showing signs of peaking, causing nervousness among investors.

Many operators focus on the extraction of shale oil, which commands higher prices in the market: infrastructure for shale gas – which involves the construction of compressor stations, storage facilities and thousands of miles of pipelines – is still relatively undeveloped.

That’s why, say some analysts, rather than spend billions of dollars developing domestic infrastructure, the US gas industry is urging the authorities to build terminals to export shale gas in the form of liquefied natural gas (LNG) to Europe and Asia, where it will fetch prices up to five times higher. Already two bills have been introduced into Congress aimed at fast-tracking LNG exports.

The fracking industry has repeatedly said that all the drilling and disruption is worthwhile in order to achieve US energy self-sufficiency.

But with production becoming increasingly difficult and expensive, and with the frackers anxious to recoup their expenditure by exporting to Europe and China, achieving that self-sufficiency looks more and more like a distant dream.