Does Cameron’s attack on onshore wind power add up? 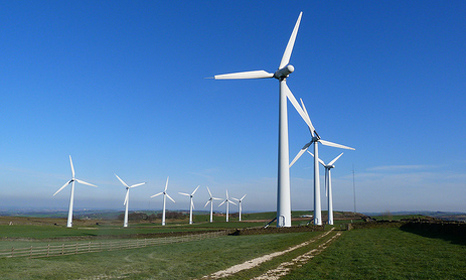 Britain will still meet its renewable energy targets if it scraps support for onshore wind, but the cost of meeting those targets will rise as the country turns to more expensive alternatives.

The senior partner in Britain’s ruling Coalition government, the Conservative Party, said on Thursday it would scrap support for future onshore wind farms, if it wins the general election next year.

“We now have enough bill payer-funded onshore wind in the pipeline to meet our renewable energy commitments and there’s no requirement for any more,” said Conservative energy minister Michael Fallon.

British planning data show that the country is on target to meet its binding European Union renewable energy targets for the end of the decade.

It is already closing in on its projected solar, biomass and onshore wind generating capacity in 2020.

In addition, it has a massive pipeline of offshore wind farm which precedent shows should receive planning consent.

But offshore wind is far more expensive than other renewable energy technologies including onshore wind.

The shift to offshore wind is politically motivated, to satisfy the rural backbone of Conservative Party support, and appease concerns about landscape blight.

The Conservative Party could be frank about the impact on energy bills of its shift in support to offshore wind, as it tries to win the next election and in particular fight off the emerging UK Independence Party.

UK planning data show that the country is presently on schedule to meet its renewable electricity targets for the end of the decade, even if it decided to halt consent for further onshore wind farms.

The data is updated monthly, and so is the most up to date available.

Like other European Union countries, the UK has a mandatory target to get a certain percentage of all its energy from renewable sources by 2020, in this case 15 percent.

Each EU country produced national renewable energy action plans (NREAP), to show the European Commission how they would meet their target.

The UK’s NREAP anticipated some 38.2 GW of renewable power capacity in 2020.

The country’s planning data show that Britain presently has an operational, installed capacity of some 16.1 gigawatts (GW) of renewable electricity.

In addition, the data show a long pipeline of approved projects with planning permission, presently awaiting or under construction.

This project pipeline would provide an additional 19.3 GW, bringing the theoretical total renewable generating capacity either already built or consented to 35.4 GW.

Not all of these consented projects would be built. The data show that some 8% of projects with planning permissions are still ultimately abandoned.

Nevertheless, the data show that Britain is likely to its target, especially if it achieves the present pipeline of offshore wind farms.

In Britain, onshore wind presently dominates operating renewable electricity generating capacity, at some 7.3 GW or 45 percent of the total, the planning data show. 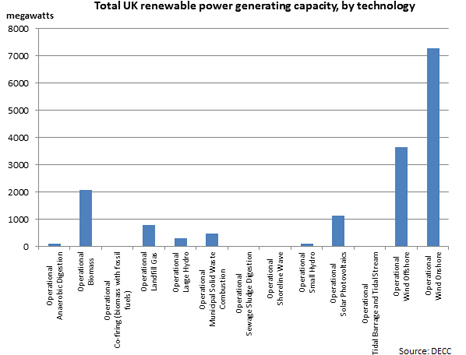 The solar power figure is an underestimate of the total installed capacity, as data is only gathered for projects above 10 kilowatts, which exceeds many roof-top systems.

Presently consented projects either operational or awaiting construction presently total some 13.9 GW for onshore wind; 9.4 GW of offshore wind; 4.9 GW of biomass; and 3.2 GW of solar.

As a result, Britain is already very close to its targets for onshore wind, biomass and solar.

However, the decision of the Conservative Party to favour offshore over onshore wind farms makes no economic sense.

The government plans to introduce a new system for renewable power subsidies, where generators earn a guaranteed flat rate per unit of power, called a strike price.

The draft strike prices published at the end of last year showed that offshore wind was the least competitive renewable energy technology.

The decision to favour offshore over onshore wind is an implicit subsidy for preserving landscapes for rural dwellers, the main source of votes for a Conservative party which faces electoral competition from the UK Independence Party.

Favouring offshore over onshore wind is therefore a political decision which will add to the cost of meeting renewable energy targets.

While avoiding landscape blight may be an important objective, the question is whether it is worth the extra cost.