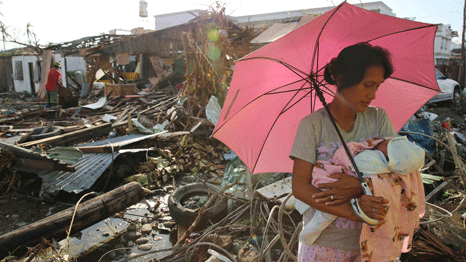 Few in developing countries living on the front line of climate change will be surprised by the results of the Intergovernmental Panel on Climate Change’s report on climate impacts.

But the IPCC’s messages about food insecurity, negative economic impacts, urban impacts or biodiversity loss are stronger and have the potential to be used to galvanise action to build resilience at national and international levels.

This is an impressive body of evidence:  the IPCC‘s 2,000-page assessment based on over 12,000 scientific papers and other documents emphasise that our societies and economies are not as climate resilient as they could be.

Climate change is disrupting the earth’s natural resource base – the agricultural and forest lands, freshwater and species diversity that human life depends upon in both developing and developed countries is at greater risk than ever.

IN DEPTH: All you need to know about the latest IPCC report

The IPCC’s Fifth Assessment Synthesis Report (the physical science, impacts and mitigation reports) will be published in October.

It has long been expected as an important set of new evidence to feed into negotiations around a global agreement on climate change.

It may fan the flames in the climate negotiations given the report highlights the disproportionate impacts of climate change on poorer countries and ‘consequential impacts’ particularly in tropical regions.

There will be a renewed demand for a just and equitable deal, bold emissions reductions commitments and finance to adapt and respond to these climate impacts.

But the evidence also points to impacts in temperate, developed countries and has the same potential to galvanise political action and leadership.

Whilst the evidence is stronger, with few surprises, and global impacts it may not substantially change the overall nature of the negotiations.

Developing countries will still need to work at multiple levels to communicate what climate impacts are really like in a way that the IPCC’s report fails to convey.

Going beyond the report’s technical language policy makers, negotiators, and communicators will need to tell stories, share examples, and empower leaders to get across the need for action.

The negotiators need this kind of support domestically to mobilise political leadership and give them a clear mandate.

Hence whilst the IPCC report provides broad data on impact much more granular information is needed to translate it into national level impacts on the economy and society.

The new report is not all doom and gloom as it notes the increasing trend in merging adaptation, mitigation and development approaches successfully: this is the three-pronged approach that CDKN calls climate compatible development.

It cites high confidence about co-benefits and synergies for transformations in systems that facilitate adaptation, mitigation and sustainable development.

As former UK Deputy Prime Minister John Prescott said recently of the new GLOBE Legislators Reports, we see a constructive move from the “moaners” to the “doers”.

Much more needs to be done, but the good news is there is much going on to tackle the real and current threats from climate change.