Scientists working on the IPCC’s latest study answer questions on adaptation, positives from warming and timeframes 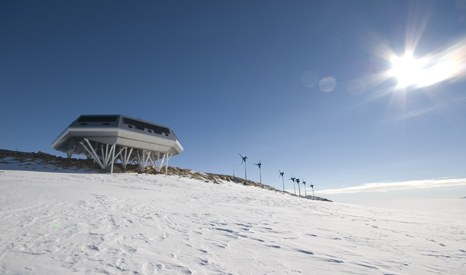 Like most people on Planet Earth, you may feel negotiating your way through the UN’s latest 1000 page report on climate change sounds too much like hard work.

And that’s a pity, because it’s really interesting, stuffed with projections for how the world is and perhaps will change over the next century and beyond, as a result of rising temperatures.

Perhaps sensing the global reluctance to get stuck in, the authors have released a *fairly* short Q&A, examining some of the key questions that are often asked about this study.

They touch on what impacts of climate change we’re now seeing, whether there are positive aspects to a warming world, and the timeframes for preventing and adapting to further extreme weather events.

It’s printed in full below – and if after reading you decide to tackle the main study – I’d recommend this guide to reading IPCC reports, by the team at Carbon Brief.

FAQ 1: Are risks of climate change mostly due to changes in extremes, changes in average climate, or both?

People and ecosystems across the world experience climate in many different ways, but weather and climate extremes strongly influence losses and disruptions. Average climate conditions are important.

They provide a starting point for understanding what grows where and for informing decisions about tourist destinations, other business opportunities, and crops to plant. But the impacts of a change in average conditions often occur as a result of changes in the frequency, intensity, or duration of extreme weather and climate events.

It is the extremes that place excessive and often unexpected demands on systems poorly equipped to deal with those extremes. For example, wet conditions lead to flooding when storm drains and other infrastructure for handling excess water are overwhelmed.

Buildings fail when wind speeds exceed design standards. For many kinds of disruption, from crop failure caused by drought to sickness and death from heat waves, the main risks are in the extremes, with changes in average conditions representing a climate with altered timing, intensity, and types of extremes.

FAQ 2: How much can we say about what society will be like in the future, in order to plan for climate change impacts?

Overall characteristics of societies and economies, such as population size, economic activity, and land use, are highly dynamic. On the scale of just one or two decades, and sometimes in less time than that, technological revolutions, political movements, or singular events can shape the course of history in unpredictable ways.

To understand potential impacts of climate change for societies and ecosystems, scientists use scenarios to explore implications of a range of possible futures. Scenarios are not predictions of what will happen, but they can be useful tools for researching a wide range of “what if” questions about what the world might be like in the future.

They can be used to study future emissions of greenhouse gases and climate change. They can also be used to explore the ways climate – change impacts depend on changes in society, such as economic or population growth or progress in controlling diseases.

Scenarios of possible decisions and policies can be used to explore the solution space for reducing greenhouse gas emissions and preparing for a changing climate.

Scenario analysis creates a foundation for understanding risks of climate change for people, ecosystems, and economies across a range of possible futures. It provides important tools for smart decision – making when both uncertainties and consequences are large.

FAQ 3: Why is climate change a particularly difficult challenge for managing risk?

Risk management is easier for nations, companies, and even individuals when the likelihood and consequences of possible events are readily understood. Risk management becomes much more challenging when the stakes are higher or when uncertainty is greater.

But many uncertainties rem ain, and will persist. In particular, future greenhouse gas emissions depend on societal choices, policies, and technology advancements not yet made, and climate – change impacts depend on both the amount of climate change that occurs and the effectiveness of development in reducing exposure and vulnerability.

The real challenge of dealing effectively with climate change is recognizing the value of wise and timely decisions in a setting where complete knowledge is impossible. This is the essence of risk management.

FAQ 4: What are the timeframes for mitigation and adaptation benefits?

Adaptation can reduce damage from impacts that cannot be avoided. Mitigation strategies can decrease the amount of climate change that occurs, as summarized in the WGIII AR5. But the consequences of investments in mitigation emerge over time.

The constraints of existing infrastructure, limited deployment of many clean technologies, and the legitimate aspirations for economic growth around the world all tend to slow the deviation from established trends in greenhouse gas emissions.

Over the next few decades, the climate change we experience will be determined primarily by the combination of past actions and current trends. The near-term is thus an era where short – term risk reduction comes from adapting to the changes already underway.

Investments in mitigation during both the near – term and the longer – term do, however, have substantial leverage on the magnitude of climate change in the latter decades of the century, making the second half of the 21st century and beyond an era of climate options.

Adaptation will still be important during the era of climate options, but with opportunities and needs that will depend on many aspects of climate change and development policy, both in the near – term and in the long – term.

FAQ 5: Can science identify thresholds beyond which climate change is dangerous?

Human activities are changing the climate. Climate change impacts are already widespread and consequential. But while science can quantify climate change risks in a technical sense, based on the probability, magnitude, and nature of the potential consequences of climate change, determining what is dangerous is ultimately a judgment that depends on values and objectives.

For example, individuals will value the present versus the future differently and will bring personal worldviews on the importance of assets like biodiversity, culture, and aesthetics.

Values also influence judgments about the relative importance of global economic growth versus assuring the well-being of the most vulnerable among us. Judgments about dangerousness can depend on the extent to which one’s livelihood, community, and family are directly exposed and vulnerable to climate change.

An individual or community displaced by climate change might legitimately consider that specific impact dangerous, even though that single impact might not cross the global threshold of dangerousness. Scientific assessment of risk can provide an important starting point for such value judgments about the danger of climate change.

FAQ 6: Are we seeing impacts of recent climate change?

Yes, there is strong evidence of impacts of recent observed climate change on physical, biological, and human systems. Many regions have experienced warming trends and more frequent high – temperature extremes. Rising temperatures are associated with decreased snowpack , and m any ecosystems are experiencing climate – induced shifts in the activity, range, or abundance of the species that inhabit them.

Oceans are also displaying changes in physical and chemical properties that, in turn, are affecting coastal and marine ecosystems such as coral reefs, and other oceanic organisms such as mollusks, crustaceans, fishes, and zooplankton . Crop production and fishery stocks are sensitive to changes in temperature.

Climate change impacts are leading to shifts in crop yields, decreasing yields overall and sometimes increasing them in temperate and higher latitudes , and catch potential of fisheries is increasing in some regions but decreasing in others. Some indigenous communities are changing seasonal migration and hunting patterns to adapt to changes in temperature.

FAQ 7: Are the future impacts of climate change only negative? Might there be positive impacts as well?

Overall, the report identifies many more negative impacts than positive impacts projected for the future, especially for high magnitudes and rates of climate change. Climate change will, however, have different impacts on people around the world and those effects will vary not only by region but over time, depending on the rate and magnitude of climate change.

For example, many countries will face increased challenges for economic development, increased risks from some diseases, or degraded ecosystems, but some countries will probably have increased opportunities for economic development, reduced instances of some diseases, or expanded areas of productive land. Crop yield changes will vary with geography and by latitude. Patterns of potential catch for fisheries are changing globally as well, with both positive and negative consequences.

FAQ 8: What communities are most vulnerable to the impacts of climate change?

Every society is vulnerable to the impacts of climate change, but the nature of that vulnerability varies across regions and communities, over time, and depends on unique socioeconomic and other conditions.

Poorer communities tend to be more vulnerable to loss of health and life, while wealthier communities usually have more economic assets at risk. Regions affected by violence or governance failure can be particularly vulnerable to climate change impacts.

Development challenges, such as gender inequality and low levels of education, and other differences among communities in age, race and ethnicity, socioeconomic status, and governance can influence vulnerability to climate change impacts in complex ways.

Climate-change policies, particularly those associated with changing rights to resources , can also increase risks from violent conflict. While statistical studies document a relationship between climate variability and conflict, there remains much disagreement about whether climate change directly causes violent conflicts.

FAQ 10: How are adaptation, mitigation, and sustainable development connected?

Mitigation has the potential to reduce climate change impacts, and adaptation can reduce the damage of those impacts. Together, both approaches can contribute to the development of societies that are more resilient to the threat of climate change and therefore more sustainable. Studies indicate that interactions between adaptation and mitigation responses have both potential synergies and trade-offs that vary according to context.

There are growing examples of co – benefits of mitigation and development policies, like those which can potentially reduce local emissions of health – damaging and climate – altering air pollutants from energy systems. It is clear that adaptation, mitigation, and sustainable development will be connected in the future.

FAQ 11 : Why is it difficult to be sure of the role of climate change in observed effects on people and ecosystems?

Climate change is one of many factors impacting the Earth’s complex human societies and natural ecosystems. In some cases the effect of climate change has a unique pattern in space or time, providing a fingerprint for identification. In others, potential effects of climate change are thoroughly mixed with effects of land use change, economic development, changes in technology, or other processes.

Trends in human activities, health, and society often have many simultaneous causes, making it especially challenging to isolate the role of climate change. Much climate – relate d damage results from extreme weather events and could be affected by changes in the frequency and intensity of these events due to climate change.

The most damaging events are rare, and the level of damage depends on context. It can therefore be challenging to build statistical confidence in observed trends, especially over short time periods.

Despite this, many climate change impacts on the physical environment and ecosystems have been identified, and increasing numbers of impacts have been found in human systems as well.