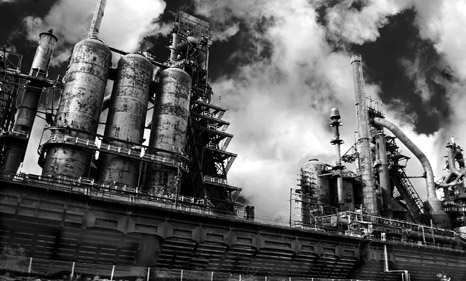 In China, coal consumption and carbon emissions are very closely correlated because coal is such a dominant part of the country’s energy mix.

As a result, analysis of coal trends provides an insight into the outlook for carbon emissions by the world’s biggest polluter.

A halving of growth in coal consumption implies a halving in carbon emissions growth.

As the world largest carbon emitter, that is good news for a global response to climate change.

There are two pauses for optimism.

First, while it is good news that carbon emissions growth is slowing, it is another matter for China to halt growth and start to cut emissions. Second, even as China does pull back, other emerging economies and notably India are likely to take its place.

China’s coal consumption has surged in the last decade, in step with the country’s economic growth (see Figure 1).

The mutual dependence with GDP growth helps explain why it has been for China to wean off coal, even as the damage from air pollution on human health has been documented.

Coal is important as a cheap, indigenous energy resource. While coal consumption growth is now slowing, it will remain the bedrock of the country’s energy economy. 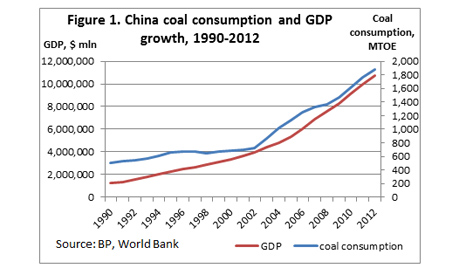 There are twin pressures on China’s coal consumption: the threat of global climate change, and increasingly public criticism of the nation’s air quality.

Regarding climate change, China five years ago set an intensity target to cut carbon emissions per unit of GDP by 40-45% by 2020 compared with 2005.

In 2005, China’s carbon intensity was just over 1 kilogramme of CO2 per $ of GDP, according to World Bank GDP data.

Of course, China sets lots of targets under successive five-year plans, and misses lots of them. But the carbon intensity may be different, as an international pledge made by previous Premier Wen Jiabao, at a United Nations climate conference in 2009.

Most recently, the country has drifted off the target (see Figure 2). To get back on track, China will have to cut carbon emissions more urgently. 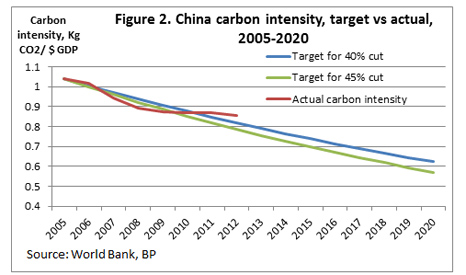 That represents an acceleration of previous plans, which envisioned coal coming down to 65% of total energy consumption by 2015.

What it means for coal consumption depends on economic growth.

“But if GDP growth holds up above 7% (which is our assumption), coal demand growth of about 3% is more likely.”

That would still be more than a halving of annual growth compared with 2012.

The question is how fast it might fall, and what that means for the country’s carbon emissions.

In its latest World Energy Outlook, published last November, the International Energy Agency pointed out that a slowdown in 2012 was partly due to heavy rains and a resulting surge in hydropower, but it also saw the beginnings of a systemic shift, as the country invested in efficiency and shifted from coal to gas, nuclear and renewables.

“In 2012, the rate of coal demand growth in China was one of the lowest over the past decade: the drivers of change may already be at work,” it said.

The IEA forecast that China’s coal consumption growth would slow for the rest of this decade and peak in 2025.

Coal use will remain central to China’s economy, not only in power generation but industry including steel and chemicals, however, meaning achieving coal consumption and carbon emissions may not start falling until 2030.

And where China pulls back India and emerging south-east Asian countries such as Vietnam will step in.

“In India, coal use continues to grow briskly throughout the projection period (2012-2035), in line with the country’s strong electricity demand growth,” the IEA projected.

“India displaces the United States as the world’s second-largest coal market before 2025. Association of Southeast Asian Nations (ASEAN) countries see a tripling of coal use; their collective consumption is nearly double that of the European Union in 2035.”