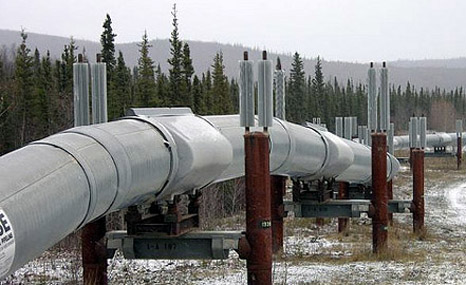 1. Keystone ‘Gulf Coast Pipeline’ opens
Oil is now flowing through the Southern leg of the Keystone pipeline, reports the Washington Post, but there are still doubts over the northern leg which would carry oil from Canada to the Gulf Coast. The $5.3 billion project has been the subject of a fierce contest between climate campaigners and operators TransCanada.  Green groups say the tar sands oil is would transport is among the most polluter forms of fossil fuel on the planet.

2. US court blocks Arctic drilling
A federal court says licences to drill in the Arctic awarded in 2008 did not consider environmental impacts. Reuters say the dispute pits Native Alaska tribes against the federal government and energy companies. Shell is the major licence holder in the region, paying around $2 billion five years ago. Last year its drill ship Kulluck ran aground while being towed away from the Arctic.

3. Yeast to oil
Engineers in Texas have turned yeast into a form of biofuels, raising hopes of another source of potentially ‘green’ fuel that could replace conventional crude oil. “This yeast produces oils and fats, known as lipids, that can be used in place of petroleum-derived products,” reports the Science Daily website.

4. Salty biofuels
Boeing is working on plans to develop biofuel from desert plants fed with seawater says the Phys.org website. The Abu Dhabi-based project, which is linked to the Masdar clean energy research institute, plans to grow saltwater-tolerant plants called halophytes. It says the the plants will be fed with waste water from a fish and shrimp farm.

5. Solar powered bridge
The world’s largest solar powered bridge has finally opened in London, reports Business Green. The Blackfriars solar array sits on top of a mainline railway station based in the city of London. Made of 4,400 PV panels, it is expected to provide around half the energy needed by the station every year.