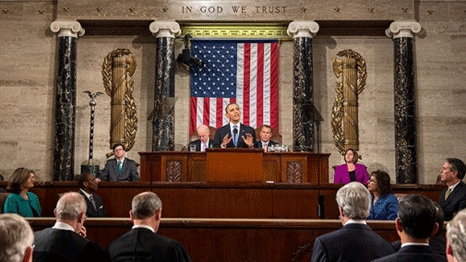 1 – Environmental groups threaten rift from Obama
A group of the nation’s leading environmental organizations is breaking with the administration over its energy policy, arguing that the White House needs to apply a strict climate test to all of its energy decisions or risk undermining one of the president’s top ­second-term priorities. The Washington Post reports that the rift — reflected in a letter sent to President Obama by 18 groups, including the Sierra Club, the Environmental Defense Fund and Earthjustice — signals that the administration is under pressure to confront the fossil-fuel industry or risk losing support from a critical part of its political base during an already difficult election year.

2 – RWE to scale back renewable investments
RWE, one of Britain’s biggest renewable energy investors, is planning to significantly scale back its spending in the UK and expects to sell off wind farms and a major biomass plant, reports the Guardian. Employees, local communities and regional councils are to be offered stakes in RWE projects as the company retreats in the face of its own huge debts, a plunging share price, and uncertain government policies.

3 – Beijing mayor announces new air pollution measures
Beijing’s mayor pledged on Thursday to cut coal use by 2.6 million tonnes and set aside 15 billion yuan ($2.4 billion) to improve air quality this year as part of the city’s “all-out effort” to tackle air pollution, state news agency Xinhua said, and which Bloomberg reports. The announcement by Wang Anshun came as the capital was blanketed in its worst smog in months. An index measuring PM2.5 particles, especially bad for health, reached 500 in much of the capital in the early hours.

4 – Climate protection may cost 4% of world’s GDP
The cost of holding rising temperatures to safe levels may reach 4% of economic output by 2030, according to a draft United Nations report seen by Bloomberg. Most scenarios that meet the 2C cap on global warming endorsed by world leaders require a 40 to 70% reduction in heat-trapping gases by 2050 from 2010 levels, according to the third installment of the UN’s IPCC report. The world would need to triple the share of renewables, nuclear power and carbon-capture and storage to meet that goal.

5 – Republicans choose sceptic to head environment committee
House Republicans selected Rep. David Schweikert, who is on the record questioning whether humans are causing climate change, to head of the Science Committee’s environment subcommittee. He said he plans to use his new post to target the Obama administration’s regulatory agenda, the Huffington Post reports. “Too often, this Administration has tried to bypass Congress and impose its will on the American people through regulatory fiat,” Schweikert said Thursday in a statement.