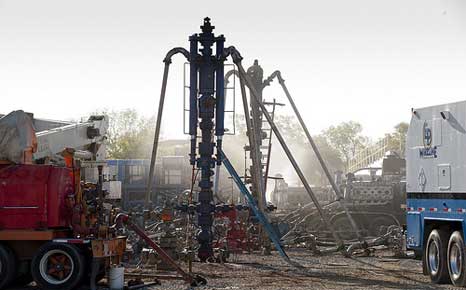 1 – UK announces more tax incentives for fracking
The UK has announced another incentive for local authorities to accept the controversial technology known as fracking, the BBC reports. Prime Minister David Cameron has said that councils that support the industry will get to keep all the business rates collected from shale gas schemes, rather than the usual 50%. Greenpeace has accused ministers of trying to “bribe councils”.

3 – China prepares for nationwide carbon trading scheme
China will look into establishing a nation-wide trading system for pollution permits as part of efforts to use market mechanisms to help clean up its environment, Reuters reports, following on from a series of pilot trading schemes that opened last year. On the Ministry of Environmental Protection website, minister Zhou Shengxian said China was working on new regulations for pollution permits and would also publish proposals for new pilot trading projects as soon as possible.

4 – Senator believes Obama will approve Keystone pipeline
A US Senator has said be believes the Obama administration will approve the controversial Keystone pipeline, amid multiple crashes in North Dakota of trains carrying the oil. The Hill reports that Senator John Hoeven said: “I think they will [approve the pipeline] because we keep pushing and I think if they turn it down I will be able to get enough of my Senate colleagues on both sides of the aisle to say ‘no.’”

5 – Climate change threatens Australia’s gumtrees
Australia’s standing as the home among the gumtrees could be challenged, with increased climate stress causing extensive change to Australia’s eucalypt ecosystems, reports the Sydney Morning Herald. A study by the National Environmental Research Program has found that climate stress on eucalypts will mean many of Australia’s 750 species will struggle to cope with climate change.