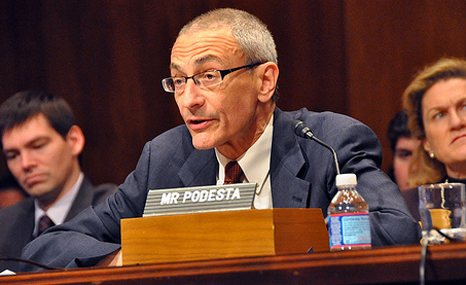 1 – Obama appoints Keystone opponent
John Podesta, a former chief of staff under President Bill Clinton, will join President Obama’s inner circle for one year as a counsellor to focus on energy and climate-change issues, according to Grist. Despite being opposed to the Keystone pipeline, in a statement yesterday, Podesta said he would distant himself from working on the pipeline decision due to conflicts of interest.

2 – New greenhouse gas discovered
A new greenhouse gas that is 7,000 times more potent than carbon dioxide at warming the Earth has been discovered by researchers in Toronto, says the Guardian. The newly discovered gas, perfluorotributylamine (PFTBA), does not occur naturally and has been in use by the electrical industry since the mid-20th century.

3 – Great Barrier Reef dredging project approved
Environment minister Greg Hunt has approved an assessment for the go-ahead of the Abbot Point dredging project which could open up the area for large scale coal exports. The project is located within the Great Barrier Reef marine park, at a site about 24km from Abbot Point, near Bowen, says the Guardian.

4 – US and Vietnam to cooperate on climate change
US Secretary of State John Kerry will travel to the Jerusalem, Ramallah, Ho Chi Minh City, Hanoi, Tacloban, and Manila over the next week, reports RTT News. Kerry’s visit to the Mekong Delta will emphasise how Americans and Vietnamese can work together on critical issues such as climate change and renewable energy.

5 – New York installs largest rooftop solar array
The largest rooftop solar installation in New York City demonstrates the viability of projects of this size in cities. According to PV Solar Report, the Hunts Point Restaurant Depot facility in the Bronx now features is now home to a 1.56MW rooftop PV solar project covering 45% of the building’s electricity costs and enabling the company to save $220,000 annually.