The path to Paris will be tough, agree UN climate chiefs past and present 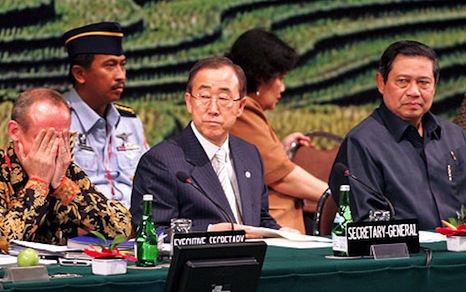 The ‘fun’ is over for the 10,000 diplomats who gathered in Warsaw this month to negotiate the beginning of the end for climate change.

After two weeks of grappling, hair tearing and lesson learning, it is class dismissed: the leading figures in the climate change world have been sent away to ‘do their homework’.

And the task is not an easy one. Having more or less decided on the rules that will guide a new climate change treaty in Warsaw, the UN has dictated that every country must now begin the process of figuring out the reductions to their national emissions they are willing to make to ensure global warming stays beneath 2C.

To find out where this leaves a process that is almost as complex and acrimonious as it is important, RTCC has spoken to the three people who know best what it’s like to lead the climate pack: the three executive secretaries, past and present, of the UN’s climate body.

Michael Zammit Cutajar founded the secretariat of the UN’s Framework Convention on Climate Change (UNFCCC) in 1991 and led the organisation until he retired in 2002. It has been a long time since he was at the heart of the process, but says he still follows it because he thinks it is important.

Speaking to RTCC on the phone from Malta, he says that “collapse was averted” in Warsaw, but that there was some slacking in terms of progress, for which countries will have to compensate when they gather again in Peru in a year from now. 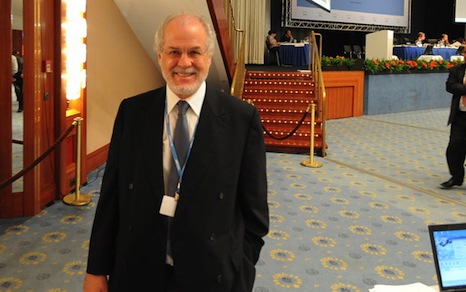 Michael Zammit Cutajar: “I don’t miss not having had jet lag for three years.” (Source: Flickr/UNclimatechange)

This conference, held in the city of Lima, will be the second milestone on the three part journey ending at Paris in 2015, where all nations have agreed to sign up to a global climate change treaty. Expectations for the final summit are high, and a failure to deliver could be the death knell for the entire UN process as far as public perception is concerned.

“Not enough was done in Warsaw, so it will have to be made up in Peru,” says Zammit Cutajar.

Like Warsaw, the next conference of the parties in Peru is unlikely to be front page news. In the agreement struck last week, it was agreed that countries “who are ready” will put their emissions reductions pledges on the table in the first quarter of 2015, and the next meeting will have to hammer out the details of what exactly this means.

“What should a pledge say? What should it not say? What sort of data should be in the pledge to enable it to be compared with other people’s pledges? All of that could have been done in Warsaw but wasn’t, so it’ll have to be done in Peru,” Zammit Cutajar explains.

Yvo de Boer headed the UN secretariat from 2006 to 2010. Until a couple of weeks ago, the photo of this Dutchman breaking down in tears at the Bali conference in 2007 was the quintessential image of the frustration that these talks can provoke. It may have been eclipsed in Warsaw by Filipino delegate Yeb Sano’s tearful plea at the opening session following the disastrous typhoon that swept through his country days before.

“I think this conference has been a difficult and at times a very acrimonious one, but it’s delivered I think some very useful guideposts to take the process forward,” de Boer told RTCC.

“It’s left us with a lot of work to do, but I think that’s a good thing because a lot needs to happen between now and Lima and between Lima and Paris to ensure we get to something meaningful in 2015.”

Speaking at 8.30pm last Saturday after 40 straight hours of negotiations, the current UNFCCC general secretary Christiana Figueres spoke the words that everyone else wanted to delay at least until they’d caught some sleep: there is more work to go.

“What is important is for me to underscore that as successful as this conference was – and I think it exceeded many expectations – it is not possible to solve climate change with one meeting, with one COP, with one negotiation,” she said. 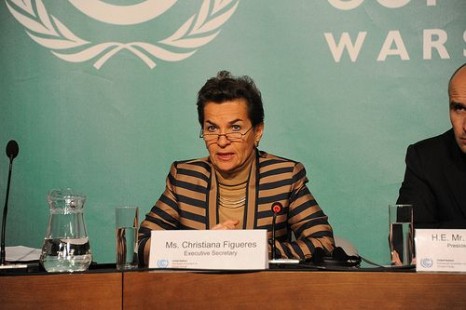 Christiana Figueres is currently the head of the UN’s climate body (Source: UNFCCC)

De Boer is blunter, perhaps because of his distance from the talks. “I do not think that even in my wildest dreams will Paris 2015 in one fail swoop close the 2C gap,” he says.

And a successful treaty in Paris is by no means a foregone conclusion, even with the steps taken this year in Warsaw. As Zammit Cutajar points out, the precedent is for failure. A similar objective was set in 2009 at the summit held in Copenhagen “which was hyped up as a chance to save the world and it didn’t,” he says.

While de Boer headed these talks, both Zammit Cutajar and Figueres also adopted official roles in the Copenhagen summit. Each one knows how badly it can go.

The most controversial aspects of the climate policy debate were laid bare at Warsaw: the issue of whether developed and developing countries should be equally bound under the new treaty, the timeline for when pledges need to come in, and the legal force that the final document will have. None of these were completely resolved, and in some cases the flames were merely fanned.

Particularly difficult was the last minute downgrading of the word “commitments” to the weaker “contributions”.

“It is saddening to think that governments are not prepared to put their name to something called a commitment,” says Zammit Cutajar.

“You can discuss what commitment means, but there’s a moral ring to it, leaving aside the legal aspect. I’m not so worried about legal form because in the end, as we found out with Kyoto, you can call something legally binding but if a government drops out there’s not much you can do about it.

“But I think the symbolism of shifting down from commitments to contributions is worrying.”

But for de Boer, the vagueness over what the legal force of the final agreement harks back to the difficulties of Copenhagen, where the Bali mandate also created a lack of clarity, talking only about an “agreed outcome”. This led to two years of negotiations over semantics and definitions, rather than the actual substance of the agreement.

“Postponing the decision on the legal form makes negotiations a lot more difficult because you don’t know exactly what the consequences are going to be in legal terms of what you’re negotiating,” he says.

“Sometimes postponing a difficult question only makes things more difficult rather than easier… Procrastination is the thief of time, and I don’t think it helps.”

If tears are to be avoided at the next two summits and further onwards in the future of the planet, diplomats need to make sure they have a steady supply of ink cartridges as they begin work on the 2015 agreement. If nothing else, the UN has taken the idea of homework to new extremes, and the consequences will be far worse than after school detention.

As Figueres said: “Yes, we’re all exhausted today but tomorrow the next step starts. We just have to keep on going until we can address this in a timely fashion.”