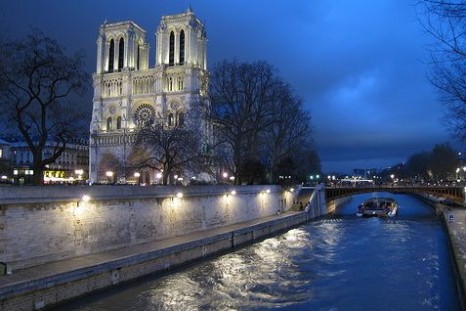 The hearts of delegates at UN talks in Warsaw are with the Philippines, but their minds are 850 miles to the west, in Paris.

That’s because in two years’ time, the same set of countries will meet there to conclude a new global agreement to fight climate change, intended to take effect from 2020.

As a result, even as delegates in Warsaw continue to work on individual issues —  such as how to support policies that reduce emissions from deforestation, and how to finance work that reduces greenhouse gas emissions — they are also beginning to grapple with how to knit those components together in an overarching agreement.

No major breakthroughs are expected this year, but many nations have expressed the desire to develop a skeletal framework and flesh out a coherent design for the 2015 agreement.

Their challenge: How to invite broad participation, while simultaneously encouraging ambitious emissions cuts?

The answer may be to seek a middle ground between what are sometimes called the “top-down” and “bottom-up” approaches.

The top-down approach envisions a sweeping agreement that would allocate the allowable “carbon budget” among countries and create a comprehensive system to implement it. Solving the problem in a single go would be great for the climate.

But that approach doesn’t mesh with the political realities of tackling the climate issue in an arena with 190+ different nations, each with its own energy mix and development priorities. Those realities came into sharp relief four years ago in Copenhagen, where grand hopes of a “global deal” ran into the reality of a UN process better suited to incremental progress.

At the other extreme, a purely “bottom-up” approach may appear more realistic, but risks achieving little. Without any framework in place to encourage countries to undertake ambitious actions, to verify that they are abiding by commitments they have made, or to provide them with the tools they need to carry them out, it is unlikely that their pledges will add up to anything remotely ambitious enough to solve the problem, or that their pledges will be implemented.

A middle road is needed: a path between “top down” and “bottom up,” and an approach that recognizes that while the UN can’t solve the problem at one blow, it has a key role to play in supporting and promoting effective action by countries. The key to this approach is constructing a legal framework, or “architecture,” that provides a home for a range of different national approaches while ensuring market integrity and encouraging ambition.

In Warsaw, an important portion of the discussion about the architecture of the 2015 agreement will play out in a track known as the “framework for various approaches,” established in Durban in 2011.

Created as a forum for exploring both market and non-market approaches for reducing emissions, the “FVA” offers an important opportunity to set guidelines for the design of effective, high-integrity national programs. As a result, it provides an opening to chart the middle path.

A sound climate architecture should give countries the confidence to take on and implement ambitious targets. It can do that by ensuring rigorous and transparent monitoring and reporting — so that countries can verify that other nations are following through on their own commitments. An architecture should create incentives for early action, even before a new agreement takes effect from 2020.

An architecture should also establish minimum guidelines or standards for the integrity of domestic programs, enabling countries to evaluate each other’s actions. Such an approach would also have the effect of facilitating environmentally sound linkages between and among those nations with existing and emerging carbon markets.

This kind of architecture could then become a “gift that keeps on giving,” as it would reinforce nations’ willingness to undertake even more ambitious targets in the future, secure in the knowledge that their negotiating partners are also undertaking and implementing their commitments.

Fortunately, establishing these guidelines does not require re-inventing the wheel: existing domestic and international emissions reductions programs have provided lessons that can be applied to both non-market and market approaches to reducing greenhouse gases. (We’ve summarized these in our most recent submission to the UN. [PDF])

One clear lesson from existing programs is that a workable and effective agreement to reduce carbon pollution would contain the following “minimum pillars”:

-For those nations that choose to use them, high-integrity market mechanisms to meet their emissions caps; and

-Flexibility in how nations might participate in a new agreement, recognizing that some nations may not be able to ratify internationally binding elements of any final 2015 deal.

Our policy brief, A Home for All: Architecture of a future global framework for mitigation action [PDF], has more details.

Although nations are unlikely to define the content and structure for the 2015 agreement at this level of specificity by the close of the Warsaw meeting, we hope countries can agree on a clear blueprint for the next phase of work that incorporates these “minimum pillars” of transparency and environmental efficacy.

The Warsaw meetings are unlikely to generate much front-page news. But behind the scenes, the talks can play an important role in preparing the ground for Paris. The key task is to lay the foundation for a durable and dynamic legal architecture that accommodates real-world constraints, while refusing to accept a lack of ambition: an architecture that provides a home for all nations to contribute to addressing the shared global challenge of climate change.

As the impacts of warming temperatures and rising seas become ever more apparent around the globe, the need for such an architecture becomes all the more urgent.