Hempleman-Adams: “the Arctic is the canary in the mine”

British adventurer first travelled to the Arctic in 1982. Back then, he says, there was more ice and the Inuits didn’t need air conditioning 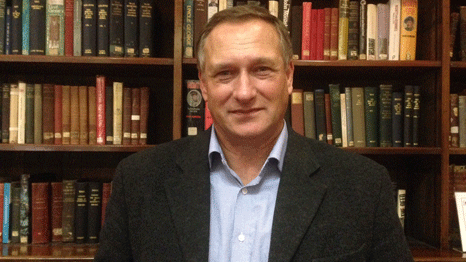 The explorer has also broken the world record for the highest formal dinner party – in an air balloon over Somerset (Source: RTCC)

David Hempleman-Adams has seen a lot of snow in his time. The Arctic explorer made his first trip to the Arctic in 1982, when he completed a 22-day trek to the North Pole, dragging his sledge behind him.

Since then, he says, he has seen the Arctic change dramatically. There is less snow now, he says, and more water. The ice is thinner.

The changes in the Arctic caused by global warming are making life difficult for explorers like Hempleman-Adams – which is quite something, when you’re talking about a man who has climbed the highest peaks across all seven continents, crossed the Atlantic Ocean in a wicker basket rozier balloon and made a total of 30 expeditions to the Arctic.

When he made his first trip to the North Pole, the ice was “pretty solid”, he said.

“Now you’ve got much thinner ice and lots more water, so those traditional trips from the north of Canada are getting rarer, because it’s so difficult – there’s so much water now.”

He adds: “It has changed the nature of exploration in the North – even logistically, when you would be dropped off by an aeroplane with skis or what we call tundra tyres, that’s changed.”

But his main concern is for how the changes in the Arctic climate will affect the indigenous people in the region – the Inuits.

Speaking at the sideline of a conference on the business potential of the Polar regions, where the President of Iceland Olafur Grimmson said that the human rights threats facing the native peoples would become just as severe as what has unfolded in Tibet, Hempleman-Adams told RTCC of the paradoxical situation he had seen emerge over the past years: Inuit people having to install air conditioning in their houses.

This may seem unlikely. The latest IPCC report shows that the globe has warmed by 0.85C since the pre-industrial era – a figure so seemingly small it barely seems worth removing your jumper – but this figure is a global average. On a regional level, the Arctic is warming the fastest and the most.

“The permafrost in the mid-summer is melting, so you’ve got these houses which are insulated for -40C in the winter. Of course in the summer there’s no air,” he says.

“Because it’s so well insulated and now you’re getting plus temperatures in the summer they can’t live because it’s too hot. You have the juxtaposition of having air conditioning in these Inuit houses, which is extraordinary.”

These houses, he says, are starting to crack and sink as the infrastructure is torn apart by the changing shape of the ground as the permafrost begins to vanish.

“It’s changing their way of life,” he says. “Where before you would have solid ice, where you would get snow mobiles or they would use dog teams, now it’s becoming too dangerous, because not only is the area of ice retreating, but the thickness of ice is retreating.

“In the last 20 years, there has been a lot more Inuit hunters dying than ever before, because they’ve got into difficulty because of the thin ice.

“It’s a bit of a cliché, but I think the Arctic is like the canary in the mine, and what’s happening to these northern inhabitants, it’s affecting them now. These are small villages of 1000 people. But it’s starting to affect us in the UK and in other areas of the world.”

Like Shell, Exxon Mobil, Gazprom and the other oil companies who intend to drill in the Arctic, Hempleman-Adams also has an interest in the region: although his days of solo trips are past, he is still leading teams on expeditions up North.

“It gets into your DNA,” he says. “You see it and it becomes a part of your life. I love the people, I love the environment, I feel very happy, very comfortable there. You just get attracted back all the time.

“It’s very odd in that sometimes you can hate it when you’re there, and it’s -55C and you’re trying to pull a sledge, but you love it and when you’re not there you miss it.

“This morning it took me three hours to go where I live in Chippenham to London. Three hours. I thought, ‘I’m wasting my time in a damn car.’”