UN climate talks: what do developing countries want in Warsaw? 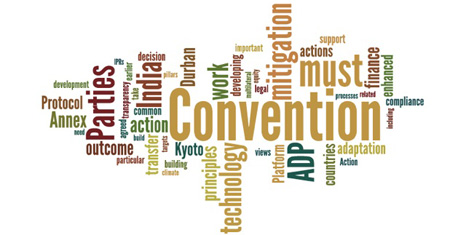 Over the last months, key countries and coalitions have shared their expectations on the outcomes of the ongoing negotiations towards the 2015 UN climate agreement to be adopted in Paris.

These written submissions play a particularly important role in the negotiation process this year due to the absence of an additional negotiating session between the June meeting and the November Warsaw Conference.

In this context, they offer a good overview of the fault lines one can expect to see emerge or widen between the positions of countries at the Warsaw climate conference.

The timing for the submission of national commitments, the role of the international review of these commitments, the degree of differentiation between different countries and the level of compliance enshrined in the 2015 deal are perhaps the four most importance points of disagreement among countries, indicating some difficult discussions ahead on the road to Paris.

The BASIC paths to a 2015 agreement

The submissions from Brazil, India and South Africa provide perhaps the most interesting lessons from this analysis as they highlight three sets of priorities among the members of BASIC – including some striking difference of views on differentiation (as of October 22, China had not provided any written submission).

Recalling its earlier position on the matter, India emphasizes its strong expectation that the negotiations respect the current structure of the convention and its annexes. Countries should thus remain divided into two categories on the basis of the annexes to the convention, the country warning that any attempt to categorize countries in a different manner that it of 1992 would constitute a violation of the mandate of the negotiations.

The Indian submission also points at the fact that the process towards the 2015 climate agreement should address all four pillars of the convention (mitigation but also adaptation, financial and technological support) as well as capacity building.

In terms of compliance, India calls for a mechanism based on the Kyoto Protocol that would ensure the respect by Annex 1 (industrialized) countries of their obligations, these obligations being based on science. For Non Annex 1 countries (developing countries and emerging economies), it only suggests the provision of positive incentives to enhance compliance. 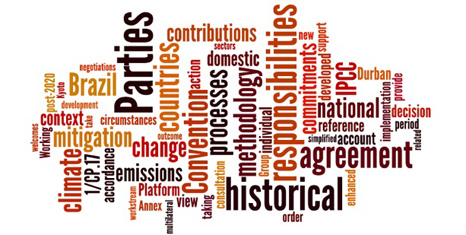 Brazil also argues for a differentiation based on the annexes to the convention, suggesting a legal distinction between the commitments of both groups. According to the country, the layout of the new agreement should ensure: ambition, effectiveness, fairness, and provide flexibilities. Its submission contains two main proposals.

Firstly, the country suggests that cumulative historical emissions should play an important role in defining the responsibility for mitigation. The country suggests that emissions from 1850 should be considered in this assessment and calls for the adoption of a short term process which would include the IPCC. This process would enable countries to present simplified evaluations of their historical emissions at the UN climate summit organized by Ban Ki-Moon in September 2014.

SOUTH AFRICA: one legally binding protocol for all

The position articulated by South Africa in its September submission is quite different from its BASIC allies. The country is very explicit about its ambition of seeing the current negotiations results with the adoption of a new protocol (an option that India has opposed vehemently) and about the need for all parties to accept legally binding obligations. These legally binding obligations would include economy-wide emission reduction targets for industrialized countries and relative emission reductions for developing countries. These commitments would be registered in the new agreement on the basis of successive commitment periods and would be accompanied by a compliance mechanism (hence following a similar approach as in the Kyoto Protocol).

South Africa also proposes a step-by-step process to define the targets of each country. Next year, countries would make initial offers, followed by quantified targets in 2015. The Paris climate conference would review these targets and suggest adjustments based on an Equity Reference Framework and on the outcomes of the 2013-2015 review of the global goal. Updated targets would then be inscribed in the climate agreement in 2017.

AFRICAN GROUP: a balanced outcome based on the convention’s principle 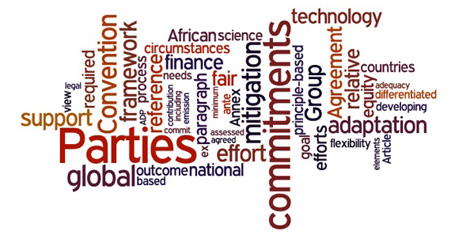 The South African proposal is also at odds on several elements with the content of the submission of the African Group. The African Group position constitute in a mix of top-down and bottom-up proposals. In relation to the former, the group advocates for the adoption of new global goals, not only related to limiting temperature increase but also on emission reductions, adaptation, finance and technological support. It calls for the review of the adequacy of national commitments of all countries on the basis of a reference framework that would include both scientific and equity elements (including the principles of the convention related to historic responsibility, respective capacities and development needs).

The group however suggests only a facilitative compliance mechanism for industrialized countries (or rather – those contained in Annex 1), referring to the weak elements of the Bali Action Plan rather than to a more robust and enforcement-focused tools provided in the Kyoto Protocol. It also suggests that national consultations defining each country’s commitment would only start in winter 2014, with the scientific and equity-based review taking place after 2015.

Like-Minded Group of Developing Countries (LMDCs): reaffirming the convention’s principles and the role of the 1992 annexes

Building on its previous submission, the LMDCs emphasize mainly their opposition to any deviation from the current differentiation between annex 1 and non-annex 1 countries, reaffirming their commitments to the respect of all principles of the convention. The LMDCs suggest that only such an approach could deliver a win-win-win situation, securing benefits from people, the climate and development.

In relation to mitigation commitments, the submission calls for the adoption of enhanced economy-wide targets for annex 1 countries – with the objective of minimizing the adverse impact of such policies on other countries. Non Annex 1 countries would participate through the implementation of National Appropriate Mitigation Actions with support from annex 2 countries.

The LMDCs also highlight the importance of the balance between both workstream (short term and post 2020 ambition) and between the different elements within each of these discussions, emphasizing the obligation of industrialized countries (“annex 2”) of financial and technological support (including through the removal of Intellectual Property barriers). 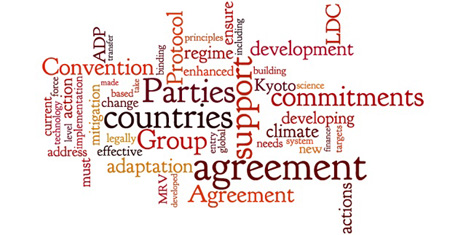 The submission by the LDCs contains several interesting elements. Firstly, it is the only coalition to refer to the importance of raising the level of ambition of the global goal to limiting the increase of temperatures up to 1.5 degrees (AOSIS not having submitted any written views up to October 22). LDCs call for the adoption of a legally binding protocol ensuring the respect of rule-based commitments that would be collectively agreed and based on latest available science. The coalition provided the only submission referring to the vulnerability of a global regime to a key country acting as a free rider. It therefore calls for the development of compliance provisions, including in relation to non-parties (a subject currently taboo in the negotiating halls).

In relation to mitigation commitments, LDCs suggest flexibility for developing countries allowing for the factoring in of national circumstances, such countries transiting over time from a variety of action to relative emission reduction targets (deviation from business as usual scenarios).

Disclaimer: many parties have submitted separate written submissions on adaptation in the 2015 agreement. These separate submissions were not included in these visualizations in order to maintain the focus of this post on the architecture of the 2015 agreement. Some parties choose to address both questions with only one submission, their views on adaptation was in this case included in the text that served as a basis for these word clouds. Hence no implications should be read from these word clouds on the importance that parties allocate to adaptation in the post 2020 framework.

This article first appeared on Adopt a Negotiator. Sébastien Duyck is an environmental advocate, student & researcher.