Pantomime to tragedy: was 2013 the year climate politics got real? 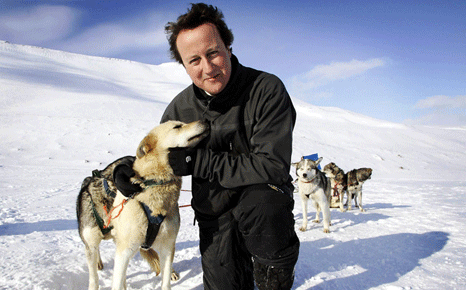 Up until the late summer of 2013 climate policy was, in the English speaking world at least, nothing more than a polite parlour game.

Once it became apparent, circa 1988, that the speed and extent of the industrial transformation of our atmosphere could no longer be ignored, charismatic political figures set about showing the world they were taking the issue seriously.

In the UK the Prime Minister has engaged in symbolic photo shoots riding skidoos across the Arctic ice. In the US, Vice president Al Gore made a film about climate change, and Obama has spoken about the need for action.

Even George W. Bush, in explaining his decision to not ratify the Kyoto protocol, still felt it necessary to play the game, and stressed the need for the US to “diversify away from fossil fuels.”

The then Australian Prime Minister Kevin Rudd, having declared climate change “the greatest moral, economic and social challenge of our time” signed Australia up to the Kyoto Protocol in 2007.

However, his move from this empty symbolism into real climate policy proved his downfall; when Rudd attempted to impose a resource tax, the mining companies fought back and Labour, desperate to appease their paymasters, promptly replaced him with Julia Gillard, who set about reforming the resource tax into just another toothless piece of climate legislation.

Most climate policy of the past 25 years has the same kind of relationship to the radical responses demanded by the science as a charades mime has to the film or book which the players are being asked to guess.

The academic Ingolfur Bludhorn has described this simulacrum of meaningful action as ‘symbolic politics’.

He argues that symbolic politics, whilst as old as society itself, has reached new levels of significance as the challenges facing humanity become more complex. But, he suggests, symbolic politics can only get us so far. At some point reality catches up with the symbolism, and the chickens come home to roost.

The new Australian Prime Minister has consigned climate change to the dustbin of policy making.

In September George Osborne, UK Chancellor of the Exchequer, proclaimed that he didn’t want the UK to be at the forefront of efforts to tackle climate change, (an amusing statement, a bit like my Gran saying she doesn’t want to compete in the Olympics 100 metres final.)

Then, on Monday 30 September, following the release of the IPCC’s Fifth Assessment Report, the UK government’s Environment Secretary, Owen Patterson, told delegates at the Conservative Party’s annual conference that we should just accept the climate has been changing for centuries, and any further increases in temperature were likely to be quite modest and have a number of beneficial impacts.

But why now? Why at the very point that the IPCC have removed any doubt about the anthropogenic nature of climate change would Western decision makers choose to abandon all pretence that they were ever serious about climate mitigation?

I would argue it is because the ultimate symbolism of climate policy now demands a response; the two degree dangerous limit idea.

The promise that climate change won’t become dangerous anytime soon can no longer be deployed to forestall the need for radical action to reduce emissions. That, after all, is what environmental limits are for; not to limit industrial activity, but enable it.

Following Fukushima, safe levels for radiation exposure were increased so that children could go back to schools that, under the previous safety levels, were declared out of bounds.

Aeroplanes were grounded across Europe in 2010 because there was no such thing as a safe level of volcanic ash for planes to fly through. It therefore became necessary to define a safe level so that flights could recommence.

And so it is with the two degree dangerous limit – it was only ever intended to allow for the continuance of business as usual in the face of the certain knowledge that industrial activity was driving atmospheric concentrations of greenhouse gases to levels higher than anything in the history of human existence.

The search for energy substitutes was meant to have delivered a solution by now. It hasn’t, and time is up; two degrees of warming cannot be avoided under business as usual scenarios.

The game of charades is now over. It is decision time – capitalism vs observance of the two degree warming limit or, in the very optimistic words of Buckminster Fuller, ‘utopia or oblivion’.

The last month of policy announcements show our political class have made their choice.

Christopher Shaw is an inter-disciplinary researcher at the University of Oxford with eight years of experience in research in the area of climate policy, social geography, public engagement and socio-technical transitions. Follow him @kalahar1