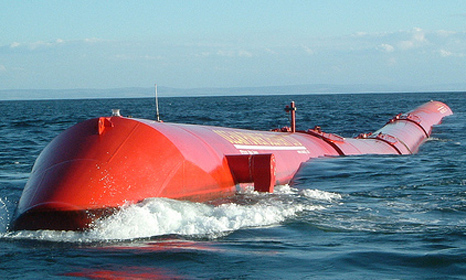 European Marine Energy Centre
EMEC’s 10th birthday year has seen unprecedented activity – making access to the site easier and running 4 turbines simultaneously on the same pier in Orkney, producing more than than the rest of the world combined at that moment.

They are also pioneering a significant number of wave technologies. EMEC hosts 90% of the world’s full scale wave and tidal energy devices and has played a central role in proving that electricity can be generated from the world’s oceans.

MeyGen
MeyGen is the world’s leading independent tidal project developer, and has an innovative business model for the sector: creating a consortium of funders and technology experts, with impressive project-management delivery and a clear phased scaling-up approach.

The company has an agreement for lease in the UK’s primary tidal hotspot, the Pentland Firth. It was awarded environmental consent by the Scottish government in September 2013 for its first 86MW phase, making it the biggest tidal energy project ever to be awarded consent by around double. There is huge potential to show leadership and scale up operations to arrive at 398MW on final completion.

Scottish Power Renewables
In 2013 SPR began testing new technologies for both wave and tidal energies. The company recently signed a memorandum of understanding to use Alstom’s tidal power devices in the Sound of Islay project, which is expected to generate up 10MW of renewable power when fully operational.

As the first utility to lead project development in the industry, SPR added a great deal of credibility to the industry and enabled it to gather other utility and major industrial involvement. It has contributed significantly to the development of the industry through its innovative approach and hands on management style.

It announced in September that it was set to share a slice of a £13 million wave first array support programme with Pelamis as part of the Scottish Government’s Marine Renewables Commercialisation Fund, in order to develop their technologies further so they can successfully deploy the first wave arrays.

As only the second wave energy technology developer to produce a full scale device, it has proven that its technology can withstand the most extreme batterings the seas around EMEC can deliver.

Pelamis Wave Power
Pelamis is developing its new generation of devices, the first of which will be installed in 2014. It announced in September that it was set to share a slice of a £13 million wave first array support programme with Aquiamarine as part of the Scottish Government’s Marine Renewables Commercialisation Fund, in order to develop its technologies further so it can successfully deploy the first wave arrays.

PWP has a history of breaking barriers, as it was the first wave energy machine to feed energy into the grid. It has continued to push the boundaries of marine energy and is the only company to have moved beyond the single device stage as it now has two “P” machines operating at its site at EMEC.

Its founder and CEO, Richard Yemm, has long been an industry champion and pioneer and his pan industry work continues as board member of RenewableUK and chairman of the Marine Energy Programme Boards Electricity Market Reform subgroup.

The three 2D hydrodynamic models of the UK’s continental shelf including the north-west European coastline is for use by tidal energy developers to identify the most efficient sites for tidal energy converters, tidal arrays or tidal barrage schemes around the UK and French coastlines.

It aims to inform location, policy and planning decisions for future site leasing rounds, and informing the site selection process for tidal turbines off the UK coastline.

They are seeking to de-risk technology innovation to help unlock investment for the industry, to prove there is a viable market for marine technology in the UK, exploit a potential UK energy solution, and support the establishment of a commercial supply chain with the potential to encourage job creation, export UK knowledge and technology across the globe, regenerate UK port infrastructure, and create numerous skills development opportunities required to service and nurture a burgeoning industry.