Attacks on climate science have been going on for 25 years, but they’re heating up again ahead of the IPCC’s AR5 report 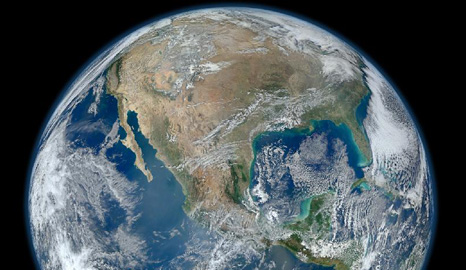 Who likes being lied to by people paid by the oil industry who pose as “experts” on climate change?

Did you know it’s been going on for 25 years?

In a couple of weeks, the UN’s official advisors on climate change science, the Intergovernmental Panel on Climate Change (IPCC) will update its global assessment on the issue.  Yet in the background, more attacks on the climate science are underway

Our new report, Dealing in Doubt, sets out the history of these attacks going back to the early 90s.

These are attacks based on anti-regulatory, so called “free market” ideology, not legitimate scientific debate, using a wide range of dirty tricks: from faked science, attacks on scientists, fake credentials, cherry-picking scientific conclusions: a campaign based on the old tobacco industry mantra: “doubt is our product”.

We give special attention to perhaps today’s poster child of the climate denial machine’s free market think tanks, the Heartland Institute, which is about to launch a new version of its “NIPCC” or “climate change reconsidered” report next week in Chicago.

Unlike the real IPCC, with thousands of scientists involved from around the world, the Heartland Institute’s handful of authors is paid.  Several of them claim fake scientific credentials.

They start with a premise of proving the overwhelming consensus on climate science wrong, whereas the real IPCC simply summarizes the best science to date on climate change. 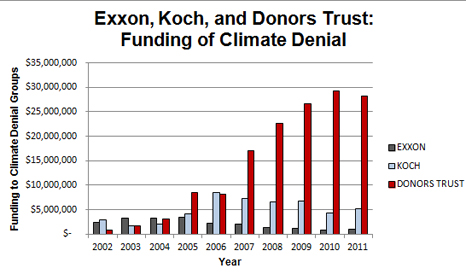 More recently, less visible channels of funding have been revealed such as the Donors Capital Fund and Donors Trust, organization that that has been called the “ATM of the conservative movement”,  distributing funds from those who don’t want to be publicly associated with the anti-environmental work product of organizations like the Heartland Institute.

In the last week we’ve seen new peer-reviewed science published, linking at least half of 2012’s extreme weather events to a human carbon footprint in the atmosphere and on the weather and climate.

As the scientific consensus strengthens by the day that climate change is happening now, that carbon pollution is causing it and must be regulated, the denial machine is getting increasingly shrill.

But today, while they are being increasingly ignored by a majority of the public, their mouthpieces in the US House of Representatives, for instance, have increased in number.

They’re still fighting the science – and they’re still being funded, to the tune of millions of dollars each year, to do it.

Dealing in Doubt sets out a history of these attacks.

We show how the tactics of the tobacco industry’s campaign for “sound science” led to the formation of front groups who, as they lost the battle to deny smoking’s health hazards and keep warning labels off of cigarettes, turned their argumentative skills to the denial of climate change science in order to slow government action.

What we don’t cover is the fact that these organizations and deniers are also working on another front, attacking solutions to climate change. They go after any form of government incentive to promote renewable energy, while cheering for coal, fracking and the Keystone pipeline.

They attack any piece of legislation the US EPA puts forward to curb pollution. Decrying President Obama’s “war on coal” is a common drumbeat of these anti-regulation groups.

One key member of the denial machine, astrophysicist Willie Soon from the Smithsonian Institute for Astrophysics, has portrayed himself as an  “expert” on mercury and public health in order to attack legislation curbing mercury emissions from coal plants.

This recent history, as well as the prior history of denial by the tobacco companies and chemical, asbestos and other manufacturing industries, is important to remember because the fossil fuel industry has never admitted that it was misguided or wrong in its early efforts to delay the policy reaction to the climate crisis.

To this day, it continues to obstruct solutions.

The individuals, organizations and corporate interests who comprise the ‘climate denial machine’ have caused harm and have slowed our response time.

As a result, we will all ultimately pay a much higher cost as we deal with the impacts, both economic and ecological.

Eventually, these interests will be held accountable for their actions.