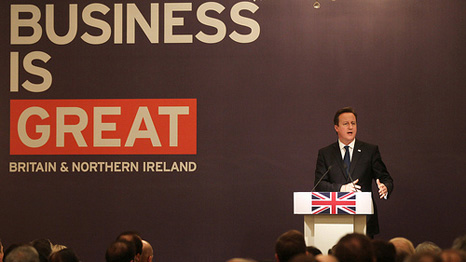 David Cameron is the latest representative from the “greenest government ever” to declare his support for fracking.

In a Telegraph column on Sunday, the Prime Minister wrote that the whole of Britain should get behind the fracking drive, which, he said, would bring down energy bills, create jobs, and bring money to local neighbourhoods.

But his column failed to mention the issue of carbon emissions, and did not consider how he would reconcile shale gas and low carbon energy sources, which he says “aren’t enough” to power Britain.

It is an aspect of the shale gas exploitation that many believe needs to be addressed, especially considering the comments from the Committee on Climate Change (CCC), led by Conservative Party politician Lord Deben, that continued use of gas, without use of technology to capture emissions, would be incompatible with meeting the UK’s binding carbon budget targets.

Cameron tried to reassure critics over the environmental concerns surrounding fracking by addressing the issue of water contamination. Despite studies linking fracked areas to contamination of the water table in the US, Cameron writes that there is no danger of this in the UK.

He writes, “International evidence shows there is no reason why the process should cause contamination of water supplies or other environmental damage, if properly regulated.

“And the regulatory system in this country is one of the most stringent in the world. If any shale gas well were to pose a risk of pollution, then we have all the powers we need to close it down.”

But the column falls silent on the other environmental effect of fracking that is inciting a barrage of anti-fracking sentiment: carbon emissions, and the encouragement of future dependence on fossil fuels.

Cameron doesn’t reference the concern that, by pushing forward with a “dash for gas”, the UK’s hopes for achieving its emissions reductions targets will be seriously imperiled – a view expressed by the independent and influential CCC in a letter to the government in 2012, and more recently in a report released in April this year.

The UK is legally bound to cut its carbon emissions by 80% by 2050, and in addition has interim carbon budgets that set the amount of carbon the country can emit every five years up until 2027. During the fourth carbon budget, between 2023 and 2027, the government is committed to halving UK emissions relative to 1990.

While shale gas is frequently cited to be less polluting than coal and oil, like with the issue of water contamination, it is by no means a foregone conclusion that the atmosphere will be better off from a switch to natural gas.

The letter from the CCC to Ed Davey in 2012 said that the focus on the natural gas industry undermined the assertion that it is a transition energy source from coal to renewables, since it diverted investment away from the development of low carbon technology.

They wrote, “The apparently ambivalent position of the Government about whether it is trying to build a low-carbon or a gas-based power system weakens the signal provided by carbon budgets to investors…

“This has been made clear to us in our extensive discussions with the energy and supply chain companies who it is hoped will fund the very significant investments needed in power generation over the next two decades, and who have suggested to us that the sector investment climate is currently very poor.”

In addition, a 2011 study by Tom Wigley, published in Climate Change Letters, suggests that natural gas would not have any less of a warming effect that coal, due to the fact that is doesn’t release the sulphates and other particles that, although detrimental to the environment, also cool the planet by blocking incoming sunlight.

The CCC’s April report said, “Shale gas, like other forms of gas, cannot be regarded as a low-carbon fuel source.”

The report states that, while it does have lower emissions that imported liquefied natural gas if the methane released during its production is carefully managed, it could only be considered a suitable substitute if used in conjunction with CCS.

It also said, “This does not alter the Committee’s previous recommendation that, over the next two decades, it will be appropriate to invest in a range of low-carbon power generation technologies rather than to have a ‘dash for gas’.”

While CCS could make fracking a viable option from the perspective of carbon emissions, the technology is still commercially unproven. A policy paper released by the European Commission in March concluded that investors currently have “no rationale” to invest in the technology because of the low price of carbon in the EU emissions trading scheme.

Cameron also draws attention to the impact that the shale gas industry has had on the gas bills in America.

In the US, shale gas exploitation has reduced gas prices from highs of around $12/MMBtu to a stable price of around $3.40/MMBtu today.

But analysis by Bloomberg New Energy Finance has shown that, due to the differing geography and legislation in the UK, the experience is likely to be quite different. Shale gas will cost more to exploit in the UK compared to the US, and its exploitation is likely to be slowed by a host of legal, planning and environmental factors.

As a result, say analysts, the rate of expansion of the shale is likely to be too slow to fully offset the need to import gas, and as such it will be higher priced imported gas that will continue to set the price in the UK market.

A series of photos of David Cameron cuddling a husky has not been enough to convince the public that he is prepared to live up to his commitment to lead the “greenest government ever”.

Osborne’s 2012 Budget, which granted £3bn in tax breaks to oil and gas explorers to encourage drilling, was a low point for those hoping that that Coalition government would push a green agenda. A bid by Tim Yeo to decarbonise the UK energy system by 2030 was also rejected.

But the drive for shale gas may be the biggest threat yet. While it may be a cleaner source of energy than coal, opponents say that the impact of this could be negligible if it ends up pushing investment away from renewable energy.

A former senior UK energy envoy recently compared shale gas to a crack addict search for a final hit, highlighting the conflict between the government’s assertion that we should be making the most of this “cheap” and “plentiful” source of energy (Boris Johnson) and the legally binding targets which oblige the UK to seriously reduce its emissions.

Given the Committee’s support for low carbon technology investment over shale gas recovery, is Cameron’s support for shale gas incompatible with the pledge he made in 2010 to lead the “greenest government ever”?

“Of course it is,” says Tom Burke, co-founder of the independent environmental organisation E3G. “I think that he’s been gulled by a big gas industry in the effort to stop renewables. I think the gas industry, which includes now Shell and all the oil makers, see what’s happening in Germany and realise that renewables kill the growth market for gas, and so they’re setting out to kill renewables.”

Cameron’s support, he suggests, is just one step further in an attempt to quell dialogue on the battle between gas and renewables, and is not an advisable strategy either in terms of energy policy or political appeasement.

“Nobody’s going to get any benefits from this even under the most optimistic view for at least five years and probably longer, so why is he taking all the political pain now? Other than some kind of rather clumsy Lynton Crosby attempt to get labour into opposing it, I can’t see any political logic to it at all.”

And perhaps in a sign Number 10 is starting to realise just how controversial this issue could be, yesterday Cameron’s official spokesman refused ten times to say whether he would support fracking near his home in Oxfordshire.

“While I’m unwilling to get into a hypothetical of where a well may or may not be opened, the point is anywhere in the country where there is that possibility of shale gas exploration taking place it is important for  dialogue to take place with local people, and that is as relevant in his constituency as it would be in any area of this country,” he reportedly told the Daily Mail newspaper.