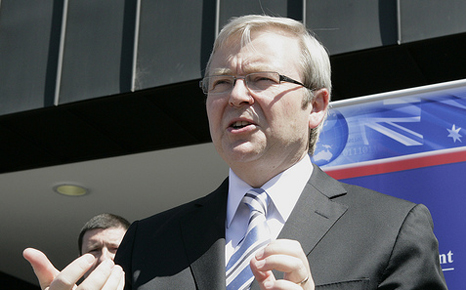 Australia: Prime Minister Kevin Rudd announced a plan on Tuesday to replace the carbon tax with a market-based trading system a full year ahead of schedule. The announcement comes as a raft of new polls show his Labor Party running neck and neck with the opposition for elections currently scheduled for September. (New York Times)

China: The first generator unit at the world’s second largest hydropower station on the lower reach of Jinsha River went into formal operation on Monday after a three-day trial. It is located between Leibo county of Sichuan Province and Yongshan county of Yunnan Province, both in southwest China. The hydropower plant will rank only second to the Three Gorges dam in south east China when all of its 18 units go into operation in 2014. (Xinhua)

Research: A study has shown that the speed of evolutionary change is far outstripped by the rate of global warming, meaning many creatures will face extinction. (Guardian)

Poland: Widespread reports that two US energy giants are planning to end their shale gas fracking operations in Poland are false and spread by “gossips,” the country’s deputy environment minister has said. (EurActiv)

Research: In a new report, climate change scientists predict that for each one degree celsius of increase in global temperature, sea levels will rise 2.3 metres. They say their estimate may be accurate for as long as the next 2,000 years. (Voice of America)

China: China has revealed plans which sets out a new target to deliver more than 35GW of solar capacity by 2015. (Business Green)

India: Chandigarh in northern India may have been hailed as a model solar city earlier this month, but confusion persists on whether the country’s plans to create 60 ‘solar cities’ will succeed. (RTCC)

Research: A new generation of flying wind turbines will enable wind power to be harnessed more cheaply and efficiently, say researchers into the technology. (RTCC)

Caribbean: The Caribbean has launched an online support tool that it hopes will promote climate-smart development by helping to embed a risk management ethic in decision-making processes across the region. (IPS News)