UN: Secretary General Ban Ki-moon has praised the work of climate scientists telling them that their work “makes my job easier”. Addressing the National Center for Atmospheric Research at the weekend Ban said climate change had been able to rise up the political agenda because the “facts don’t lie”. The next IPCC report on the latest climate science will be released later this year. (UN) 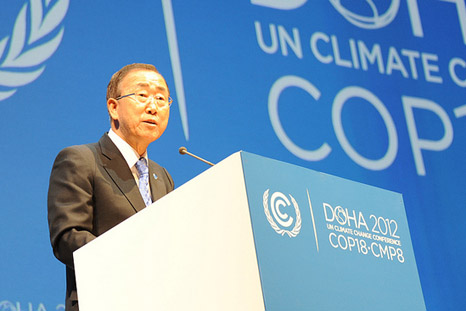 Ban Ki-moon has attended every UN climate summit since he became Secretary General in 2007 (Source: Flickr/UNFCCC)

USA: New York Mayor Michael Bloomberg is expected to announce a set of flood defence investments for the city as it looks to protect itself against a future 100-year flood that could be “six foot higher than Sandy”. (NY1)

Global: Worldwide shale oil reserves could power the world for ten years according to the first ever global assessment carried out by the US Department for Energy. (Financial Times)

Aviation: A group of frequent flyers in the US, led by billionaire climate activist Tom Steyer, has launched a campaign to apply pressure on United Airlines to do more to fight climate change. The airline claims it backs the recent statement of the industry group IATA pressing for a global carbon offsetting scheme for airlines. (Reuters)

UNFCCC: The deadlock at the UNFCCC talks in Bonn that have held back the first week of the negotiations may have been resolved during late last night. RTCC understands a compromise has been agreed on a dispute over the meeting’s agenda that will allow more progress to be made during the second week of the meeting.