UK: Fracking for shale gas poses no substantial earthquake risk according to a new study by Durham University. The research looked at almost 200 examples of manmade seismic activity finding that the injection of waste water from mining and oil drilling were of greater concern. Prof Richard Davies, the study’s lead author said the greater risk from fracking would the result of damaged well casings allowing liquids used in the process to leak. (BBC) 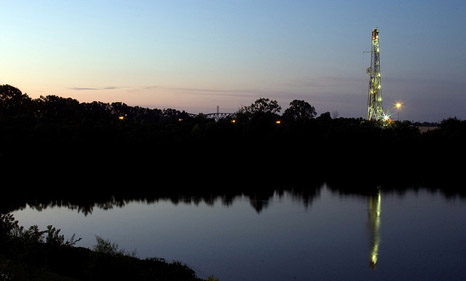 USA: Children in the US will be given substantial lessons on climate change for the first time. New science curriculum guidelines passed on Tuesday will give middle and high school students in 40 states a thorough grounding in climate science. The scale of the lessons has been cut back by a third compared to an earlier draft. (The Guardian)

Science: The British Antarctic Survey has air dropped 25 scientific ‘spears’ into some of the most dangerous parts of Antarctica in order to gather data. The three metre long javelins are equipped with GPS transmitters and will be used to monitor the movements of the Pine Island Glacier, one of the continent’s fastest moving ice streams. (BBC)

UK: The largest offshore windfarm on the planet is now connected to the UK national grid and producing electricity. Located 20km off the coasts of Kent and Essex, the London Array is made up of 175 turbines and generates 630MW, enough to power nearly half a million homes a year. (RTCC)

Scotland: First Minister Alex Salmond’s ambitious plan for Scotland to generate 100% of its electricity demand from renewables by 2020 is being threatened by a Loch Ness monster. A 67 turbine windfarm on the hills around Loch Ness, which would be the Highland’s largest onshore project, has become a test case for conservationists and there is speculation that Salmond could perform a u-turn on renewables and block the development. (The Daily Telegraph)

Canada: Alberta’s Premier Alison Redford is in Washington DC to campaign on behalf of the Keystone XL tar sands pipeline. The project would run from the oilsands in her province to refineries on the US Gulf coast. Critics say the chance of spills and the development of carbon intensive tar sands oil mean the project is not worth the environmental or climate risk, but Redford said many of these claims were “far from reality”. (New York Times)