UK: Former Beatles front-man Sir Paul McCartney has given his backing to the UK’s Climate Week campaign. The week-long event is already half way through with more than 3000 events organised up and down the country. (PaulMcCartney.com) 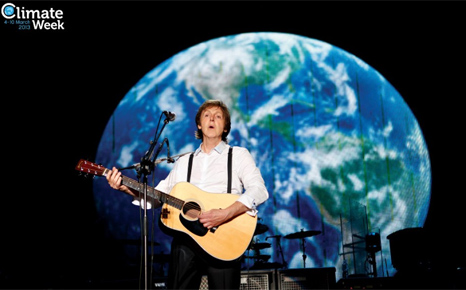 USA: New York state has extended its ban on large scale fracking operations until 2015. The ban started in 2008 and covers two of the largest deposits of shale gas in the country. (Reuters)

Venezuela: Venezuela’s lead climate negotiator Claudia Salerno has told RTCC that recently deceased President Hugo Chavez wanted an ambitious and fair UN climate treaty. “The only thing we can do to honour his memory is to bring to him the kind of ambitious agreement in making the world to be a safer and a better place,” she said. (RTCC)

EU: The health care bill from Europe’s coal power plant pollution is as much €43bn a year according to a report by the Health and Environment Alliance (HEAL). The UK has been taken to the Supreme Court by environment lawyers ClientEarth for breaching EU air pollution laws. The first hearing starts today. (EurActiv)

UK: A group of grandparents occupied a bank in Bristol yesterday to protest against its investment in UK coal infrastructure. ‘Grandparents for a Safe Earth’ stayed in the branch of Barclays all day handing out leaflets to staff and customers. They left peacefully with police officers shortly before the bank closed. (Bristlol247.com)

USA: Opponents of the Keystone XL pipeline are looking to force further delays. The State Department published a report last week that ruled out the pipeline adding to greenhouse gas emissions. It argued that the oil will find a way to market with or without the pipeline from Canada to US refineries. Environmental groups want 120 rather than 45 days to review the 2000 page report. (Reuters)