The Pacific Island of Samoa is experiencing the full force of Tropical Cyclone Evan – the first major storm in the South Pacific’s summer cyclone season. Winds of up to 110kph have hit the capital Apia, with reports on twitter that two people have died amid widespread flooding and collapsed infrastructure. While it is currently hard to link any individual weather event to climate change, scientists believe increased levels of precipitation in the atmosphere as a result of global warming make them more likely. 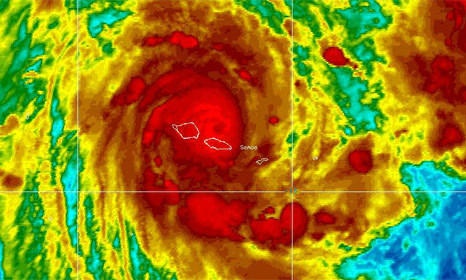 US: A new survey has found that 74% of people in New York are concerned about climate change. The poll by Quinnipiac University also found that two thirds of New Yorkers think areas of the city that are rebuilt after Hurricane Sandy should factor shifts in weather patterns into their design. (StatePolitics)

Hollywood: Former Vice President of the US Al Gore has told an audience from the movie industry that there needs to be more films dealing with climate change. He told the group of 75 guests, including Leonard Nimoy, that there was a danger climate change was slipping off the radar. (Hollywood Reporter)

UK: Fracking can resume in the UK after an eight-month hiatus the UK Government has confirmed despite warnings that pursuing shale gas is incompatible with the country’s greenhouse gas targets.

Secretary of State for Energy and Climate Change Ed Davey said:  “Shale gas represents a promising new potential energy resource for the UK. It could contribute significantly to our energy security, reducing our reliance on imported gas, as we move to a low carbon economy. My decision is based on the evidence. It comes after detailed study of the latest scientific research available and advice from leading experts in the field.”

The fracking technique, which involves using pressurised liquid to release gas trapped in rocks was banned in the UK after a series of tremors linked to a shale gas test site in Lancashire.

“We are strengthening the stringent regime already in place with new controls around seismic risks. And as the industry develops we will remain vigilant to all emerging evidence to ensure fracking is safe and the local environment is protected,” said Davey.

NGOs are concerned that a gas driven energy strategy will derail climate change targets and that there are localised environmental risks attached to fracking.

“Despite all the hype, there is still considerable uncertainty as to how much shale gas is in the ground and whether it will be socially, environmentally or economically viable to extract,” said Jenny Banks, Energy Policy Officer, WWF-UK.

China: The Chinese Government has doubled its support for solar energy sending the shares of Chinese solar companies in the US soaring. The EU has already launched an investigation into alleged anti-competitive support for solar firms in China. (Reuters)

US: A group of 29 Republican and Democratic lawmakers in the US are pushing to establish new tax support for renewable energy. “Small tweaks to the tax code could attract billions of dollars in private sector investment to renewable energy deployment,” the 29 lawmakers said in a letter to President Barack Obama, requesting his support. The plans would open up loopholes commonly used by oil pipelines and other energy projects, to renewables. (Reuters)