-Contact us by email or twitter!
-Those on the ground in Qatar can also visit the Climate Change Studio in Hall 4, a collaboration between the UNFCCC and RTCC. Contact the Secretariat to request an interview.

Ambition: A joint statement from the Association of Small Island States, the Least Developed Countries, and Africa has raised concerns that the talks are “falling short” of what was agreed in Durban. The signatories make the following demands:

Kyoto deadlock: Demands from small island states for greater short-term climate ambition from the European Union risk stalling negotiations in Doha, according to observers RTCC has spoken to. And there are growing concerns that countries who have little interest in these talks succeeding are using these fears to split the ‘Durban Alliance’ of the EU, Association of Small Island States (AOSIS) and Least Developed Countries (LDCs). 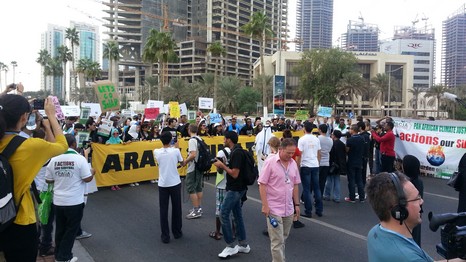 Deadlock revisited: The long running dispute in the LCA track of talks looks set to repeat itself today. Negotiators reacted in opposite extremes to a text produced by LCA chair Ayser Tayeb earlier in the week. After a round of issue by issue meetings, Tayeb announced he would draft another text due out on Saturday to form a new basis for negotiation.

Finance: It has always been a contentious issue and a central part of negotiations in Doha. As week one winds down, governments are now looking to the arrival of ministers on Monday for further progress. Decisions on rich countries’ transparency regarding donations thus far, future sources of finance and a new mechanism for loss and damage have progressed as far as they can without intervention from the higher ups.