Those on the ground in Qatar can also visit the Climate Change Studio in Hall 4, a collaboration between the UNFCCC and RTCC. Contact the Secretariat to request an interview.

China: Chinese lead negotiator Su Wei has said that if there is not an agreement on a second commitment period of the Kyoto Protocol it would be: “disastrous for talks on future enhanced action after 2020. If we cannot agree on immediate actions, how can anyone agree on future actions?”

A new deal incorporating all nations, to be agreed by 2015 and applied from 2020, is dependent on a group of rich countries making new cuts under the Kyoto Protocol.

US: The US gave its backing to the UNFCCC process after rumours earlier in the month linked it with an exit. The UN body is irreplaceable according to US Deputy Climate Change Envoy Jonathan Pershing.

Australia: The country has submitted its QELRO, its emission reduction commitment for the second period of the Kyoto Protocol. The 0.5% reduction on 1990 emissions are in line with its existing voluntary pledge to cut its greenhouse gases by 5% on 2000 levels. This 5% figure could rise to 15% if a number of conditions are met, namely that advanced economies make similar binding promises to Australia. A global deal would see Australia push for a 25% cut on its 2000 baseline.

The groups said the new phase must last five years, not the eight years that is on the table, in order to lock in higher ambition. They also said countries that don’t make binding pledges to cut emissions, should not be allowed to benefit from the offsetting, carbon trading and other mechanisms incorporated into the Kyoto Protocol’s rules.

“A failure to build on the progress we have made at this critical juncture could be a set back from which we may never recover,” read the statement.

The Alliance of Small Island States, Least Developed Countries and the African Group, some 100 nations, said the Protocol should be provisionally applied from 1 January – a head of its entry into force to prevent a gap between phases.

YOUNGOs: A sobering dose of reality at the youth group’s press conference. Speakers from around the world sharing their experiences of climate impacts now. Jane Nurse from Grenada spoke of the battering her region is experiencing from heavy Hurricanes.

Michael Sandmel offered some hope for action in the US with two tales of local governments assessing their exposure to climate change.

The group’s members are wearing red dots to show that they have been affected by climate change and showed off a map of the world with red dots to mark the impacts being experienced around the world. 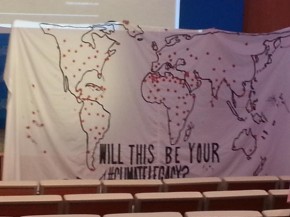 In the main plenary: The conference’s President, H.E. Abdullah bin Hamad Al-Attiyah got proceedings underway. He confirmed that all NGOs and IGOs were admitted and started working through the early housekeeping. He also announced that the Emir of Qatar and UN Secretary General Ban Ki-moon will be in attendance for the high-level segment next week.

Overheard: The conference Chair’s document is out. The text forms the initial basis for discussions and gives a good indicator of things to come. One hardened cynic of Qatar’s selection as host said the text was “encouraging”.

US: The first demonstration-scale carbon capture and storage plant in the US has successfully injected 317,000 metric tonnes of CO2 during its first year of operation. The Illinois Basin-Decatur Project has taken the CO2 from an adjacent ethanol plant and stored it in an underground reservoir. (Business Green)

US: A climate change forum in Boston has asked what would happen if a storm like Sandy hit the city. The meeting brought together climate change experts to detail the potential impacts, including flooding of extreme weather events in the region. (Boston.com)

EU: As governments from across the EU head to Doha, the continent’s debt crisis could have sapped its ability to lead the way on climate change. Concerns are being voiced that some EU member states and the heavy industry lobby in Europe have been working to chip away at the work of the EU commissioner on climate change, Connie Hedegaard, to attempt to legislate against carbon. (Reuters)

UK: The government is getting ready to defend their Green Deal tax break from EU threats. The UK wants to offer reduced tax rates for energy saving materials that are deemed crucial for the programme, but faces a battle as the EU mules over whether to proceed with a legal challenge against the policy. (Business Green)