1630 Interesting report from risk analysts Maplecroft mapping the Australia’s water stress. The country benefits from a massive mining sector, a huge water user. A carbon tax will soon charge big emitters $24 per tonnne of CO2 they add to the atmosphere.

1505 The Indian solar panel market is complaining that the US attaching favourable terms to climate finance that force developers to use less efficient American thin film panels, instead of Indian Crystalline technology. The Centre for Science and Environment claims the States is offering loans with just 3% interest as part of its UNFCCC fast start financing commitments. The condition however, is that all panels bought must be American.

1500 Back to India for two stories now. First, an unnamed Indian negotiator at the Rio+20 summit has said that the country will absolutely insist on a seat on the 30 person panel that will develop Sustainable Development Goals. The country fears having the SDGs dictated to them by the west, as it says was the case with the Millennium Development Goals.

1400 The first Chinese ship to use the Arctic route to sail from the Pacific to the Atlantic has completed its journey. Xuelong, or Snow Dragon, completed the voyage in 10 days. The Chinese are interested in the potential new shipping lane as it is significantly shorter than alternate routes to Europe. As the Arctic summer becomes increasingly sea-ice free, the route becomes more and more feasible for sustained commercial shipping.

1240 Potentially huge story brewing in India that could threaten the Prime Minister. The current Coal Minister has said he disagrees with the way coal mining licences were sold previously by government. Cheap blocks were sold to private companies leaving the government out of pocket by more $33 billion. Current Prime Minister Manmohan Singh performed the role of Coal Minister between 2005 and 2009.

1130 Incredible story about Manila’s struggle with sea level rise. Part’s of the Filipino capital are sinking at a rate of 1m every four years because of the extent of groundwater extraction beneath its streets.

1055 New controls on shipping emissions near North American coastlines came into force this month. Ships within 200 nautical miles of the US or Canada will be required to burn cleaner fuels. The regulations are designed to cut pollutants such as nitrogen and sulphur oxides that directly affect human health. There are hopes that a global deal to cut shipping’s CO2 emissions can be agreed in the near future.

0955 Greenpeace has raised concerns with South Africa’s latest National Development Plan (NDP). While the plans for the country’s growth include 20 GW of renewable energy by 2030, Greenpeace is concerned with the ongoing prominence of coal for power generation and the suggested exploitation of gas reserves. The NDP also suggest mining for coal in the Waterberg mountain range, part of which is a nature reserve.

0845 Energy related CO2 emissions in the US fell 2.4% in 2011 after a 3.3% increase in 2010. The figures have returned to around 5.5 billion metric tonnes of CO2, similar to the 1995 levels, after peaking at more than 6 billion metric tonnes in 2007. The switch from coal to gas power plants has been credited with the decline. The US renewable industry continues to grow but is dogged by policy uncertainty.

0840 An offshore wind farm in Germany has been held-up by concerns that the noise of the turbines could interfere with porpoises. Noise reduction measures are now being fitted to ensure the wind farm does not disrupt the animals’ sonar.

0830 New research has shown that climate-induced water stresses played a part in the collapse of  ancient civilisations in Egypt.

0825 As the English football season gets under way this weekend, there’s news from the US that Major League Baseball has had to adapt to climate change this summer with players, literally, feeling the heat.

Construction of the controversial Keystone XL pipeline resumed yesterday however, protesters were quickly on site to oppose the project.

The Tar Sands Blockade unfurled banners at sites in E. Texas today. Notice the “Don’t Tread on Me” flag 2. yfrog.com/g0t04phj#nokxl 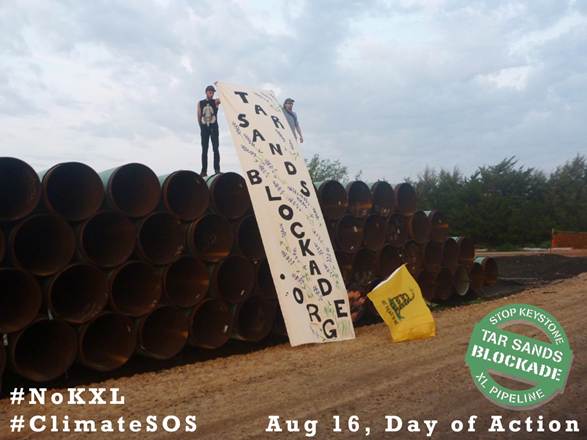 A good walk through from the New Statesman of Bloomberg’s calls for more carbon taxes.

A concise and even handed assessment of the Rio+20 summit in June from Foreign Affairs, The Road from Rio: Why Environmentalism Needs to Come Down from the Summit