1715 A study in Australia has estimated the related health costs of coal power at A$2.6 billion. The report by Climate and Health Alliance and the Climate Institute says tackling climate change can reduce hospital admissions, boost life expectancy and improve productivity by cutting sick days.

1630 Al Gore has knocked both US Presidential candidates for their silence on climate change issues.

1600 Are we about to see the rise of the radical protester and just how much inspiration have they taken from the environmental movement?

1430 Ex-Shell chairman Lord Ron Oxburgh has said that the world is going backwards on carbon cutting. He said the lack of political will had resulted in a dangerous delay in emission reductions.

1330 Nobody likes a parasite but it appears parasites like climate change. Researchers have found that a number of virulent free-loaders, including tapeworms, will become better able to infect their hosts as climate variability increases.

1215 Brazil struggles with the black carbon legacy of decades of slash and burn in the Amazon. Remnants of charred vegetation are now leaching into the marine ecosystem.

1030 Climate aid represents less than 2% of all aid in Malawi according to new figures. A study by the Strauss Center of 700 projects in Malawi, found that only 1-2% were “climate-coded”.

0910 New data from an ice monitoring satellite suggests that the rate of sea ice loss from the Arctic is 50% greater than previously thought. Scientists believe the Arctic could be free of sea ice in the summer within a few years.

0835 Mitt Romney has named his presidential running mate. Paul Ryan was announced on Saturday morning. The Grist has provided a run down of the proposed Ryan Budget, which includes $40bn in tax breaks for the fossil fuel industry. A glance at his voting record in congress also has some worrying signs for environmentalists.

0830 The curtain has fallen on the Olympic Games here in London. The days of glittering gold are over for now but one new climate study continues the bling theme. Diamond particles could be an effective geoengineering aerosol according to the report. Sulphur has been mooted most frequently of late however concerns over its effect on the ozone layer have led scientists to look at alternatives. Thankfully,  titanium dioxide can have a similar result for rather a lot less cost.

Great blog from PwC about what the recession has done for climate change and sustainability.

Great shot from the China Daily of an official removing a manhole cover to relieve a flooded street. The paper spoke to a number of experts who have attributed increasing rainfall with climate change. 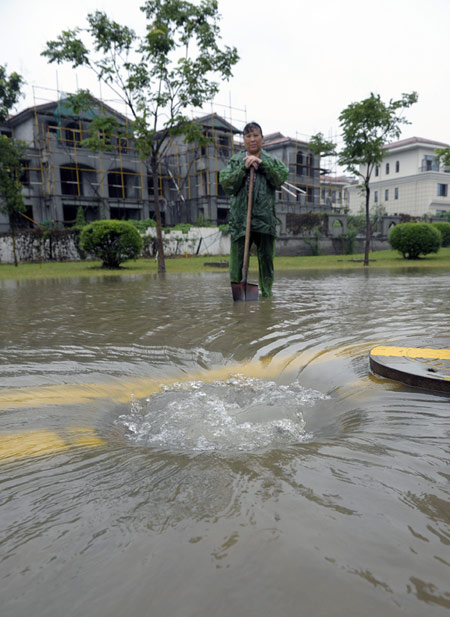